As much as we love music, it’s not often that we see a school performance we’ll remember for years to come.

The Timpanogos High School Show and Chamber Choir was obviously well aware of this fact when they began practicing for their performance of the “William Tell Overture” in Orem, Utah. When they took the stage, not only did they show off their incredible talent, but they also made sure to keep their audience on their toes!

In a video posted on YouTube in 2010, we see the students begin their number. Much like any regular show, they appear to be taking each note seriously, but it doesn’t take long for the facade to fade!

As soon as it does, they start hopping around like they’re riding actual horses in time with the song. Then they spread out, striking theatrical poses, staring off into the distance, and even plopping down on the stands like they’re exhausted by all the “bum bum bum-ing” they have to do to create the tune. 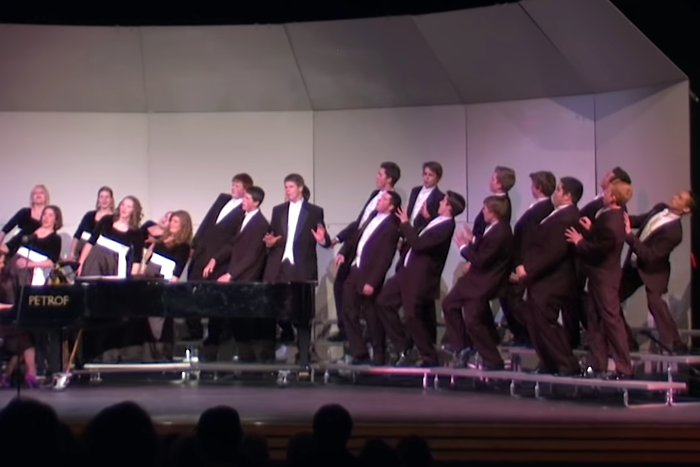 Of course, the audience loves it! We can hear them laughing and snapping photos of the students as they get really into their routine. In fact, the teens don’t seem to notice how well they’re doing because they never miss a beat or break character.

The end result is an impressive mix of singing and awesome dance moves that makes us wish we were still in show choir!

Despite their formal attire, it’s clear this group knows how to have fun. What a breath of fresh air! This is one performance we won’t forget anytime soon.

Watch the creative routine in the video below, and be sure to share it with your friends.