We live in a diverse world, but that’s not always reflected in what we see on TV.

Only 3.1 percent of regular broadcast shows feature characters who have disabilities, compared to the 1 in 4 individuals who have a disability in the U.S. That’s why people are applauding the new Netflix series, “The Healing Powers of Dude.” 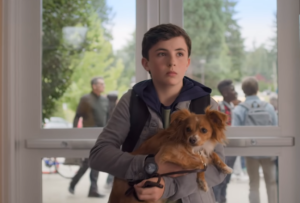 The family comedy is based on the real-life experiences of co-creator Sam Littenberg-Weisberg’s brother and follows Noah, a boy with social anxiety disorder, as he navigates middle school, friendships, and therapy with Dude, his emotional support dog.

Because anxiety can be hard to identify, the show uses visual cues to help viewers see things from Noah’s point of view. For example, as Noah boards a school bus filled with new faces, it quickly transforms into a scene straight out of a horror movie. 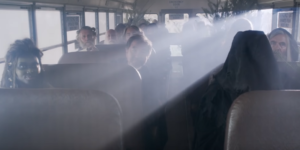 But Noah isn’t alone on his journey! He’s joined by his best friend Amara, who uses a wheelchair.

Creators Erica Spates and Littenberg-Weisberg were determined to hire an actor who uses one as well and found a perfect match in 11-year-old Sophie Kim, who has muscular dystrophy. They also partnered with RespectAbility, a nonprofit that works to “fight stigmas and advance opportunities” for people with disabilities, to ensure they represented Amara’s character accurately. 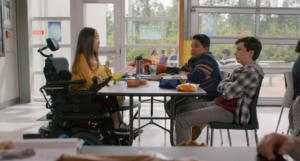 Spates and Littenberg-Weisberg said their goal is to normalize similar topics so young people will be empowered to ask for help when they need it.

“There are disabilities you can see, like someone in a wheelchair, and those you might never know about, like anxiety,” they said. “We decided this could be a great opportunity to show kids and families the struggles people face on both sides, as well as challenge some of the prejudices and misconceptions people have.” 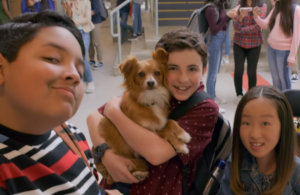 What a wonderful way to teach children and teenagers to accept themselves and others! If you’re looking for something to watch, “The Healing Powers of Dude” premiered on January 13, so you can dive right in.

Check out the trailer below, and share this story to spread the word!