Some people can seemingly make anything fun, like boring or repetitive jobs. And when they do, they help spread their light and joy to anyone who might come across them.

A lot rests on tarmac workers executing their jobs with precision. If planes don’t know where to go when they’re preparing for takeoff or landing, things can go seriously wrong. But just because they have people counting on them, doesn’t mean that they, too, can’t have fun on the job! Such is the case with one very energetic and comical New York City airport employee.

Last week, Terry McBride was traveling back to Nashville from NYC when she saw something amusing out her window… 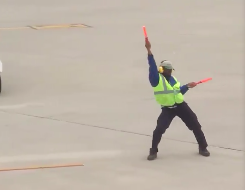 Naturally, she whipped out her phone and started recording from her seat.

The video shows a man in a highlighter yellow vest holding bright orange batons… dancing his way alongside an airplane as it pulls out of the gate. 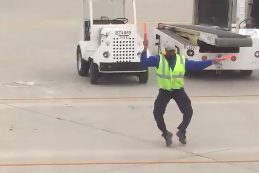 Terry captioned the video, “Here we go again. Leaving New York this morning on my way back to Nashville and the Tarmac Dancer is back at it.” Apparently, he’s become something of a local celebrity at the airport! 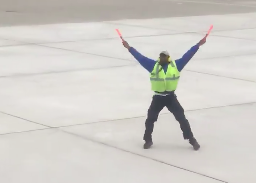 Throughout the video, you can hear the flight attendant giving the traditional airplane safety speech as the dancing man busts an array of hilarious and impressive moves outside. From using one of his orange batons to gallop like a horse to executing his own bouncy shuffle, the man displays a truly impressive repertoire of dances.

Giggles become audible in the video, and the aircrew even let out a few laughs. Clearly, she’s been clued into the delightful show out the window. Watch it for yourself below.

Share if seeing this guy would make your next vacation infinitely better!