Until just recently, Binford Middle School was under the threat of closure. But it went through a transition several years ago and became the first college prep public school in Virginia that specializes in the arts.

That happened back in the 2015-16 school year, just a year before Talib Gill entered the sixth grade. He was obviously born with innate singing skills, and they’ve only been enhanced by being immersed in an academic atmosphere where students are encouraged to follow their artistic passions. 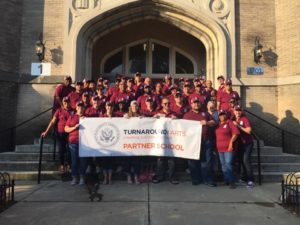 Young Talib has an almost supernatural set of pipes and a vocal range far beyond his years, and his performances have become almost legendary over the last couple years.

Last year, for example, he sang “Lift Every Voice And Sing” at a baseball game that was ultimately cancelled because of bad weather. But “Talib was the sun that (shone) thru the rain!” his middle school proudly announced.

Happy Friday RPS Family from @BinfordLions and 7th grader Talib Gill. Mr. Gill performed "Lift Every Voice And Sing" at this weeks RPS Night at The Diamond. The game was cancelled due to inclement weather, but Talib was the sun that shown thru the rain! #RStudentsRock #WeAreRPS pic.twitter.com/GduxsR1qAu

But his profile rose even higher earlier this month, when he belted out a spine-tingling version of the Star Spangled Banner at a basketball game. And the enclosed court provided just the right acoustical arena, every single word echoing back with an almost ghost-like resonance that’s entirely appropriate for the song.

“The Lady Lions victory wasn’t the only awesome thing that happened last night,” Richmond Public Schools wrote in the Facebook post. “Check out this AMAZING performance of the National Anthem by Binford MS 8th-grader Talib Gill.” 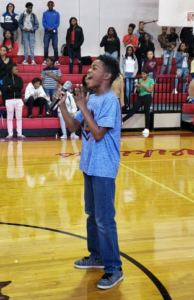 The Star Spangled Banner is notoriously difficult to sing since it requires a vocal range from one extreme to the other. Talib is only 12 or 13 years old, yet he hits each and every note better than most seasoned singers and performers!

We’ll probably see him on “America’s Got Talent” or “The Voice” one of these days, so for now, just consider his performance below as a preview of coming attractions. Share to spread his talent!

The Lady Lions victory wasn't the only awesome thing that happened last night. Check out this AMAZING performance of the National Anthem by Binford MS 8th-grader Talib Gill. If this doesn't make you feel good today, nothing will! #RStudentsRock #WeAreRPS