They mistake plastic bags for something edible and down the hatch they go. They get stuck in six-pack rings, which is why it’s always a good idea to cut them into strips before throwing them away. And, of course, there are all those plastic fishing gadgets, like the one below, left behind by fishermen. 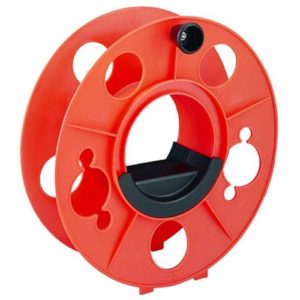 In the video at the bottom of this post, hundreds of seals are seen scrambling from the beach and into the water under either a real or imagined threat. We’re guessing they thought these kayakers had it in for them, but that couldn’t be further from the truth.

As they watch them flee, the eagle-eyed men spot a plastic ring encircling a seal’s neck. 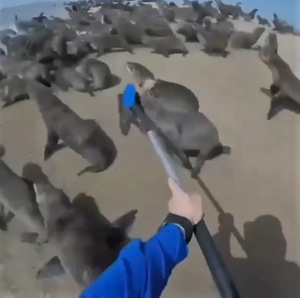 One of the men uses his oar to corral the seal, then grabs it by the flipper and drags it back to shore. What’s ironic here is that they both want the same thing, for the seal to live, but this poor creature doesn’t see it that way. It desperately thrashes, trying to shake him off so he can join the rest of his friends. 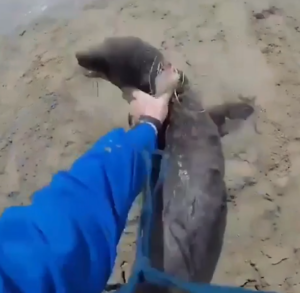 Another kayaker joins his efforts and pins the seal’s head on the sand while they carefully (but quickly) ease the tangled fishing line and thick, red ring off its neck. 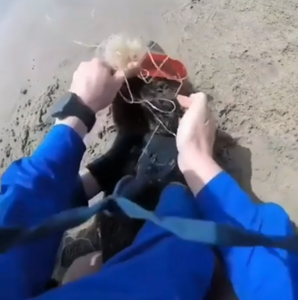 The video was posted by Redditor UWphoto, who noted, “If you’ve ever seen the teeth on those beasts (or smelled their breath!) you know how extra-amazing this is.”

Time and again, humans put themselves in harm’s way to come to the aid of helpless animals (who, other than maybe elephants, never seem to fully appreciate the effort). But sometimes it’s worth it to suffer a couple puncture wounds if it means saving a life.

Watch the whole rescue in the video below, and share to thank these men for doing the right thing.