Every parent knows how attached children get to their favorite toys — and how upsetting it is to lose them.

Leah Sharkey’s 3-year-old son, Camden, was beside himself when his beloved “booboo” disappeared. The mother and son had been driving back home from Michigan before the New Year when Camden held the plush toy out the window and “flew” it over the Ohio Turnpike. Then, it slipped out of his hand. 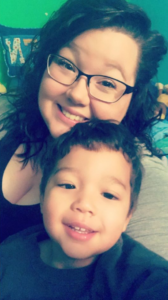 The next thing Leah knew, Camden was screaming, “Mommy my booboo!” She pulled over to check the back seat, but it was gone. She didn’t know what to do. Now both of them were crying. Desperate to soothe her son, Leah began backing up in the side lane in the hopes she might spot the toy. That’s when Ohio State Highway Patrol Trooper Alex Schlottag drove up and asked if she was okay.

After Leah explained the situation, Schlottag took her number and told her to keep driving. He’d take over the search for booboo and let her know whether he found anything. Just 30 minutes later, she got the call. Schlottag gave her a place to meet, and before long, Camden had the toy in his arms once again. He made sure to thank his hero with a big hug.

“Thank you so much to officer Alex Schlottag of the Ohio State Patrol,” she wrote. “You have no idea how much it meant to him and I both, we will never forget this.” 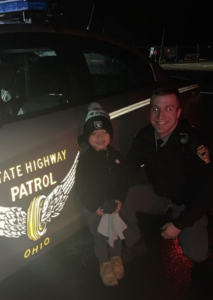 This wasn’t the first time Schlottag was recognized for his kindness on duty. In September, Pamela Musarra thanked the trooper for keeping her and three other women safe after their tire blew out on the road. Schlottag was also named the Highway Patrol Milan Post’s trooper of the year in December! 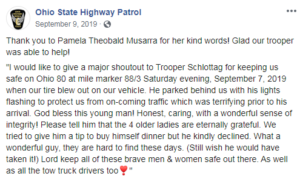 Schlottag’s commitment to serving his community, no matter the favor, is what makes him a fine member of the Ohio State Highway Patrol — not to mention Camden’s hero! Thank you for all you do, Trooper Schlottag!

Share this story to spread thanks to those who protect and serve.