Life dealt Isaiah Taylor a tough hand, but you wouldn’t know it by his upbeat attitude.

The Alabama student has a rare degenerative genetic disorder that affects his nervous system and worsens each day. That said, he still finds reasons to smile — like Deputy Jason Cowart, his dear friend from Reeltown High School. 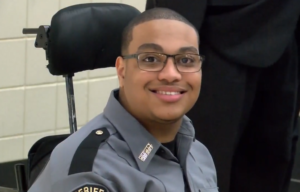 Isaiah first met Cowart when Jacklyn Baker, his mom, began dropping him off early so she could make it to work. The two formed an instant connection, and not long after, they were great friends!

“I go in early, and he and I just sit and watch ‘The Price is Right,'” Cowart told WRBL. “His heart is so huge, and his smile is so big. He’s amazing. He will make you a better person.”

One day, Isaiah shared his longtime dream of becoming a cop with his friend, and Cowart knew he had to make it happen. So he took the idea to the Tallapoosa County Sheriff’s Office and arranged for the teen to become an honorary officer. 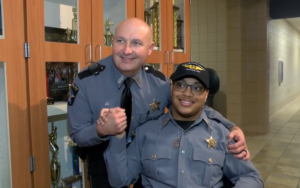 On January 7, Reeltown High held a swearing-in ceremony for Isaiah, during which nearly 100 Alabama law enforcement officers lined the halls to salute him. In the auditorium, he received a uniform, a sheriff’s star, and a heartfelt speech from his dearest friend and new coworker:

Three weeks ago, you told me you wanted to be a cop when you grow up. Well, you’ve grown up, and you are a deputy. I’m very proud of you. I can’t wait for the rest of the year, spending it next to you watching ‘The Price is Right’ in the morning, and now it will be as my partner. I just want you to know, Isaiah, how much I love you and how much you mean to me and this department. 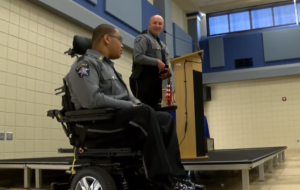 Afterwards, Isaiah had the time of his life patrolling the school in a police cruiser and making his first radio call. Then he took a ride in a state trooper helicopter!

The special day meant just as much to Isaiah as it did to his new brothers and sisters in blue.

“We needed this just as much as he did,” Deputy Chief David McMichael said. “Last year we had six police officers lost in the state of Alabama. Today, Isaiah made the thin blue line a little thicker because of the dream he had.” 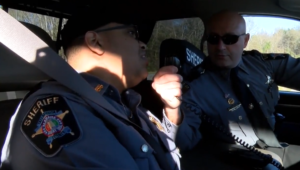 What a beautiful friendship! We’re so glad Isaiah and Cowart will be able to support each other no matter what life throws their way.

Watch Isaiah’s dream come true in the video below, and share to congratulate him!

HONORARY OFFICER: A special needs student formed a special bond with the school resource officer, who would look after him every day. Now, the two have gone from friends to "brothers" 😭https://cbsn.ws/2sPCbDH

Posted by The Uplift on Wednesday, January 8, 2020