It ain’t easy being a squirrel.

They spend all fall collecting enough nuts to last through winter, but storing them in their nests is out of the question because that’s just an invitation for another animal to come along and steal them. So they have to be strategic about it, sometimes even making a big show about burying them in one place in plain sight of everyone, only to hide them somewhere else entirely. 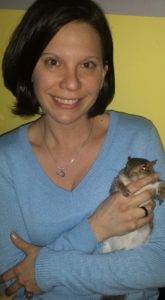 Fortunately, Wally the squirrel was adopted by Shannon Apple and her family in Parkville, Maryland, so he doesn’t exactly have to worry about how to put food on the table during those long winter months. But he’s still a slave to his instincts, and as an indoor squirrel, finding somewhere to store his nuts is a problem. Or was, until he hit on a brilliant idea. 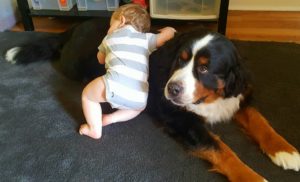 Meet Jax, another non-human member of the Apple household. This Bernese Mountain Dog‘s massive body hides a gentle soul, and if the other members of the household want to use him as a pillow or saddle him up and make him gallop through the living room, that’s fine by him. Wally uses him for climbing practice, but as far as he’s concerned, the best thing about Jax is his soft, lush coat. Shhhh, don’t tell anyone, but that’s his secret hiding spot!

You’d think he’d pay a little more attention to his surroundings and make sure no one’s watching before secreting away this nut, but he’s obviously preoccupied. How cute is this?

They’ll never find it there. Thankfully, Bernese Mountain Dogs are heavy shedders, so all he has to do now is round up some of those tumbleweeds and cover the…

Poor Wally, now he has to start all over again! Watch the full, adorable scene in the clip below and share to spread some laughs…