Josh Marshall from Kansas is in the running for Best Dad of the Year Award after helping his son in the most admirable way.

Gabriel, Josh’s 8-year-old son, has already gone through more trials and tribulations than many could even imagine. Diagnosed with a brain tumor in March of 2015, worries overwhelmed him and his loved ones – the risks of surgery being paramount.

Since, the brave young boy has gone through multiple operations to remove the tumor in his brain. 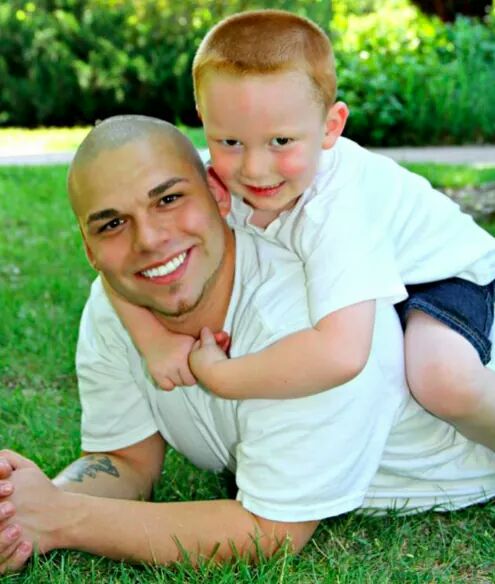 But not did only the extreme struggles of health affect Gabriel, his physical appearance also took an emotional toll.

With a shaved head and a large scar draped from the right side of his head down passed the front of his ear, he was insecure about his looks. He even used the word “monster” when describing how he sees himself.

But Dad came to the rescue.

Desperate to support his son in any way possible, he thought of an amazing idea to give Gabriel strength. Going bald was the first step, but what about the scar? Easy, he went to a parlor and received a matching, to-the-tee, tattoo of his son’s mark. 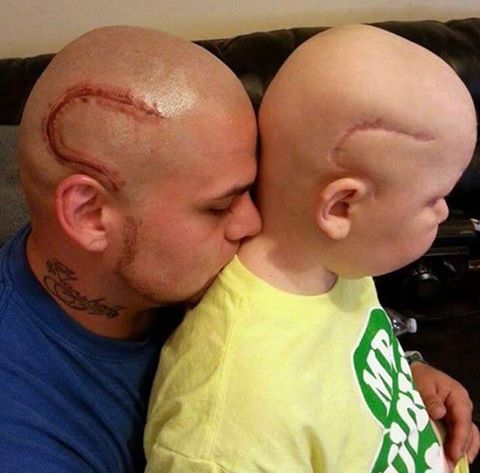 Josh submitted a picture of the two to a St. Baldrick’s – Gabriel’s hospital – #BestBaldDad photo competition. With the picture, Josh wrote, “Got my son’s scar tattooed to help his self confidence.”

With no surprise, they won the contest! Once the magnificent photo made its way to the world of social media, it took viral status in no time!

And now, the moment you’ve all been waiting for! After thousands of likes, shares, comments & beautiful tributes to these amazing dads, St. Baldrick’s 2016 #BestBaldDad winner is… bit.ly/bestbald2016winner #StBaldricks #childhoodcancer #kidswithcancer #shavee #FathersDay