Sometimes you just need someone to be scared with you. And to recognize that certain situations generate more fear than hope.

I’ve never been more scared than when I was pregnant with my rainbow baby. I knew that a positive pregnancy test didn’t equal a positive outcome. I knew that the fragile baby I was carrying might vanish before I could hold him in my arms. After all, I’d hoped to bring home two babies prior to that pregnancy, but they hadn’t survived.

When I finally mustered the courage to make the announcement to a select few, many of them squealed in delight, congratulating me with pure glee. They were quick to assure me that everything was going to work out.

And honestly, the enthusiasm surprised me. Sure, I considered pregnancy to be a gift, but I hadn’t yet accomplished the task of bringing my rainbow baby home, alive. It was strange to be congratulated when my pregnancy had yet to prove successful. It was as if they’d completely forgotten that I’d buried a baby less than a year prior.

But then there was my mom. One of the people I was most afraid to tell. I remembered my phone call to her, informing her that we were going to lose baby Micah. It was the hardest phone call I’ve ever had to make – one that I didn’t want to have to make again. I was afraid that once I told her I was pregnant, I’d immediately have to take it back.

But she responded in a way that only a mother could, I suppose. Fully aware of her own child’s distress. She didn’t congratulate me. Or squeal. Or begin asking about the details.

She simply asked me if I was scared.

I needed my fear to be validated.

And my mother’s lack of enthusiasm in response to my pregnancy announcement did just that.

Optimism is nice. Enthusiasm is nice. Hope is nice. And honestly, all of these things are needed.

But sometimes, you just need someone to sit with you in the dark.

And I thank God for giving me a mother who could do just that.

This story originally appeared on A Beautifully Burdened Life 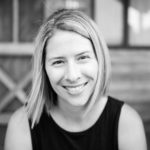