When society stands in our path, we can always find a way to move around it. Russell O’Grady is living proof!

The 51-year-old with Down syndrome retired from McDonald’s last year after an inspiring 32-year career, one that was filled with countless difficulties — and triumphs. 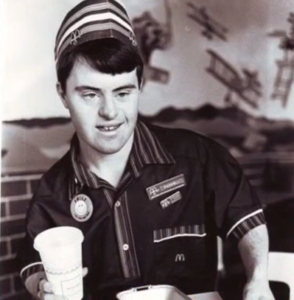 When he got started, the world looked different for people who have Down syndrome. While they still struggle to find jobs today, back then, long-term employment opportunities were almost nonexistent.

That’s why Russell made waves when he took a position with McDonald’s in Australia in 1986. The then 18-year-old was one of the first individuals to ever land a job through a program called Jobsupport.

Jobsupport helps people with intellectual disabilities find work by analyzing clients’ skills and abilities and matching them up with an appropriate participating company. It truly goes the extra mile by learning each job responsibility so it can provide extra training to determined employees like Russell.

Three days a week, Russell greeted customers, cleaned the dining area, and cleared trays. He did such a great job that he quickly became a favorite among customers and employees alike. In fact, many visited the Northmead McDonald’s just to see his smiling face, which added to the obvious truth that people with disabilities can achieve great things. 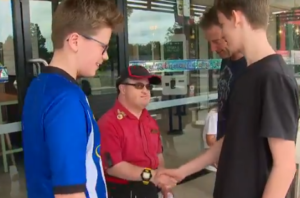 That’s why Russell decided to celebrate his 30th work anniversary in 2016. Not only was it a victory for him, but it also paved the way for others to believe they can have successful careers and live however they want to.

“Without that initiative, lots of people like Russell wouldn’t have the jobs they do today,” his father Geoff said. “They wouldn’t have the reward that that gives them, which is pride, a boost of their self-esteem, and feeling important and belonging in society.” 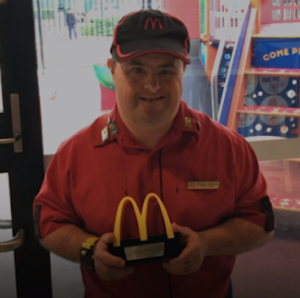 Russell weathered every storm that tried to keep him from living his best life. After 32 years of hard work, he deserves a relaxing retirement full of activities like bowling and dog therapy. Of course, he’ll also return to McDonald’s… as a customer!

Learn more about Russell’s well-deserved retirement in the video below, and inspire others by sharing his story.

A pioneering worker who helped paved the way for other people living with intellectual disabilities retired today from his much-loved job at @McDonalds. Russell O'Grady has Down Syndrome but that didn't stop him taking up work when doing so seemed almost unthinkable. #7News pic.twitter.com/dKieRu6bLy