Being in the right place at the right time can make for some magical experiences.

Just ask Richard Sohn, who decided to take his son Mitchell on a fishing trip one Sunday afternoon in Knysna, South Africa. While the pair had a camera ready, they never expected to capture this awe-inspiring moment! 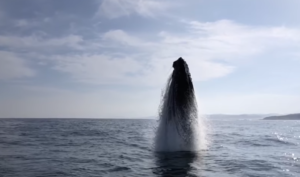 While they were out on the water, Mitchell started recording their surroundings on his phone. Moments later, he noticed a creature breaking through the surface.

A humpback whale was breaching right in front of them! The majestic sea creature turned in the air before crashing back down, creating a gigantic splash. Mitchell whooped, amazed by the breathtaking sight before him.

As for Richard, he couldn’t be more thrilled. We can tell because the look on his face says everything! He sent the breathtaking footage to his business partner Trevor, whose wife, Vanessa Cloete, shared the video on Facebook. 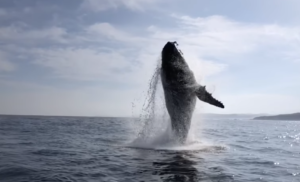 “On the third anniversary of the #knysnafires what an incredible symbol of #knysnarising,” she wrote. “Nature is so powerful and so humbling.”

She was referring to a disaster in 2017, which destroyed more than 1,000 homes and killed several people in Knysna.

As the video gains traction, thousands are marveling with her and wishing they had been there in person! “The best I have seen for a very long time,” one viewer wrote. “They are calling us to come and watch them.” Another person said, “A symbol to commemorate ‘Knysna rises’ like a phoenix from the sea!” 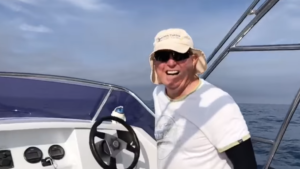 Talk about getting lucky! We’re sure Richard and Mitchell will always cherish this once-in-a-lifetime experience. And to think they didn’t plan this at all! It just goes to show that life is full of wonderful surprises.

Check out the magnificent animal in the video below, and share this stunning footage with a friend.