In bullying, as in life, the best defense is a good offense. Although, you can’t really accuse this cat of being a bully. She’s just doing what comes naturally, just idly stalking things until she gets hungry enough to actually follow through with a kill.

In this case, her hunting instincts are triggered by a slight movement on this street in the Luxembourg city of Esch-sur-Alzette. When you’re on a cat’s kill list, the last thing you want to do is draw attention to yourself. 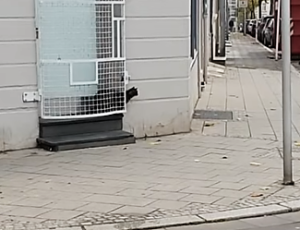 After a few more seconds of recon work, she makes a split decision and leaps out from behind her cover. She sprints across the street, then stops in the middle of the intersection to get into a stalking stance. And what, exactly, are all those whiskers zeroed in on? 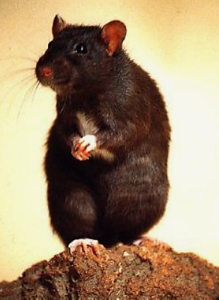 It scurries along the side of the building, presumably looking for a hole or something to hide inside until the cat gets bored and looks for easier prey.

But then… something in his demeanor changes.

He’s sick and tired of all the bullies, not just the cats, but the birds, the snakes, the weasels, even humans. Unfortunately for the cat, she’s representative of all the indignities he’s had to suffer over the years. Today, the bullying stops.

Talk about uncharted territory. She’s never had the tables turned on her like this. Cats actually aren’t very good at killing rats and mostly stick to mice, so she probably didn’t intend to actually kill him, just have a little fun to pass the time and hone her hunting skills while she was at it. After seeing what she’s up against, though, she’s perfectly willing to walk away.

But Mr. Rat isn’t letting her off the hook that easy. He has a score to settle. He doesn’t just fight back, he chases her through the intersection!

This is one rat that’s not to be messed with. Watch the chase continue in the video below, and share if you couldn’t help cheering this feisty rodent on!