Thanks to the bravery of the victims who testified against him, serial sex offender Dr. Larry Nassar has been sent to jail for the rest of his life.

Rachael Denhollander was the first of his victims to speak out against his crimes against her, and her testimony in front of the court helped seal his fate as he was sentenced to 175 years in prison. Yet it is not Rachael’s righteous anger or understandable grief which set her emotional testimony apart from that of other victims; it was her incredible grace, the fact that she extended forgiveness to her abuser without ever losing sight of how wrong his actions were. 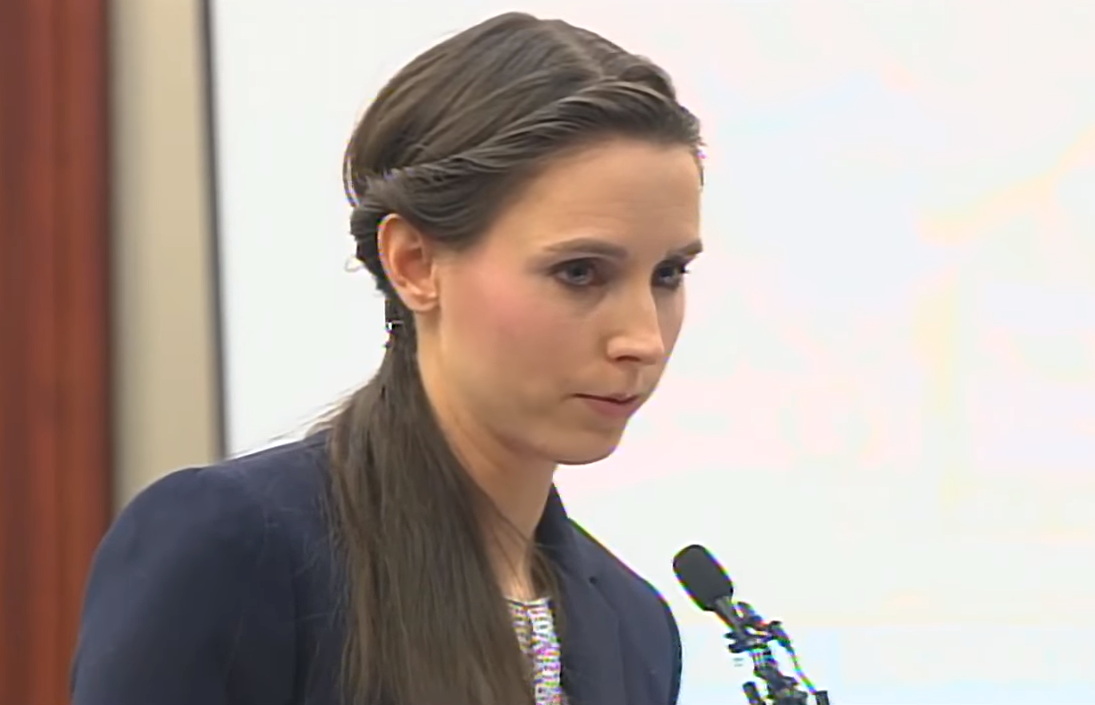 When Rachael was fifteen years old, she was an Olympic gymnast who suffered from chronic back pain. Her trainers sent her to Michigan State University to see Dr. Larry Nassar, a world-renowned sports physician responsible for treating some of America’s best and brightest women gymnasts. 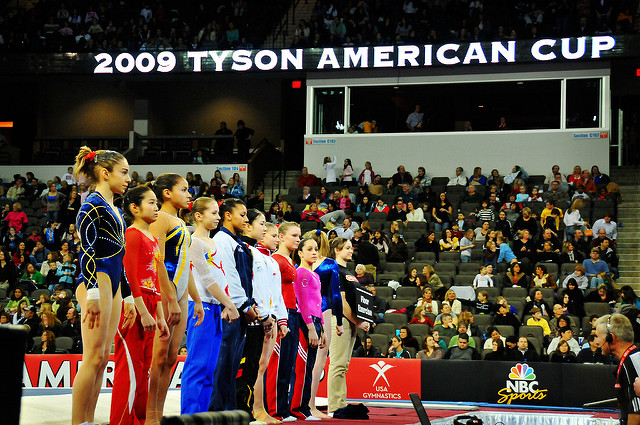 That’s when Rachael was repeatedly sexually assaulted, often with her mother sitting right there in the room with her.

“Larry is a hardened and determined sexual predator. I know this first-hand. At age 15, when I suffered from chronic back pain, Larry sexually assaulted me repeatedly under the guise of medical treatment for nearly a year. He did this with my own mother in the room, carefully and perfectly obstructing her view so she would not know what he was doing.

His ability to gain my trust and the trust of my parents, his grooming and carefully calculated brazen sexual assault was the result of deliberate, premeditated, intentional and methodological patterns of abuse — patterns that were rehearsed long before I walked through Larry’s exam room door and which continue to be perpetrated I believe on a daily basis for 16 more years, until I filed the police report.”

In 2004, Rachael was an adult and had gained enough perspective and life experience to realize that what Larry had done to her was not normal. She had become a gymnastics coach herself, and she realized that some of the girls she was teaching could wind up going to see the doctor who had caused her such pain in her own life.

She knew she had to take a stand. 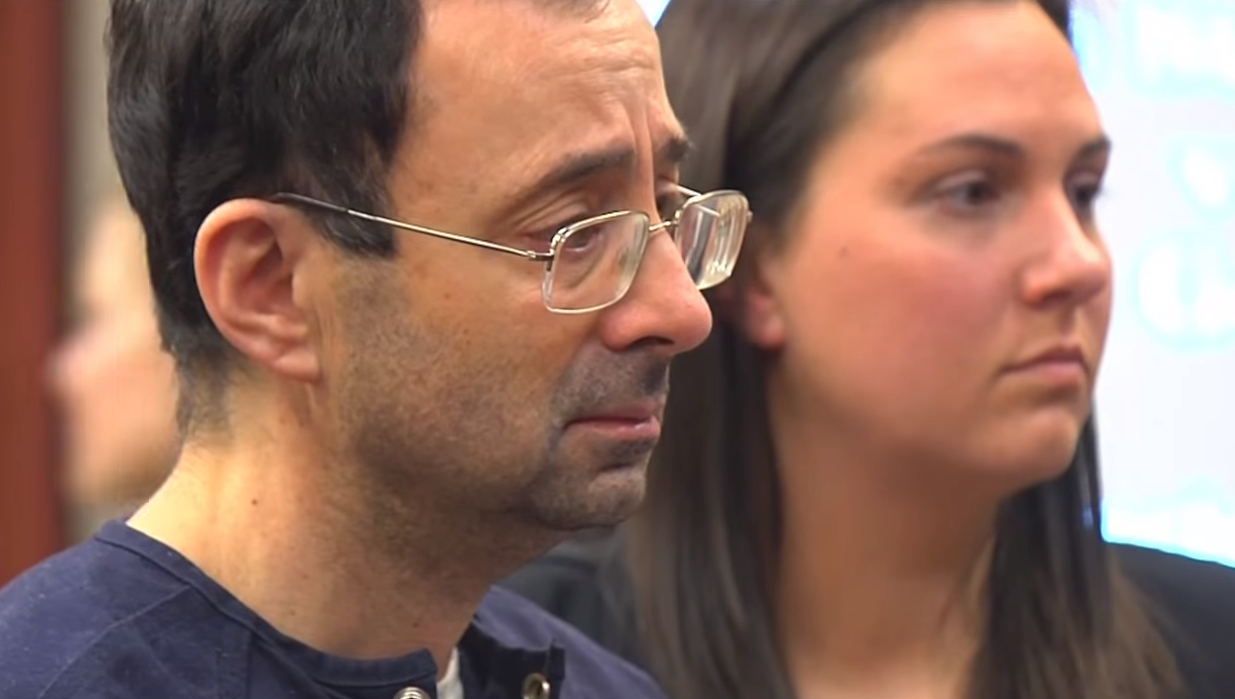 Sixteen years after her numerous assaults, Rachael reported Larry for sexual abuse, opening the door for over one hundred and sixty other women to come forward and report him as well. 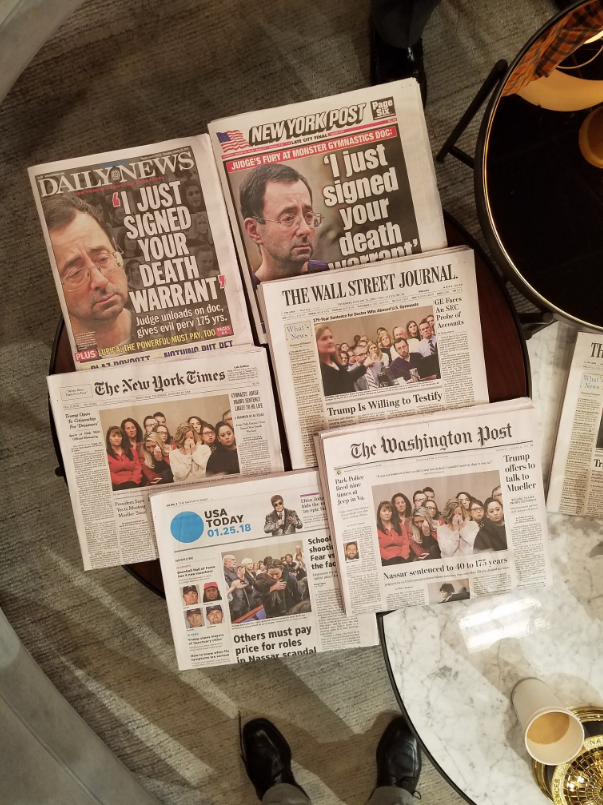 On January 24, 2018, Rachael spoke for thirty-six minutes to Judge Rosemarie Aquilina at the Ingham County Circuit Court in Michigan. While she begged the judge to sentence Larry as harshly as possible for his decades of sexual abuse against young women, she also surprised everyone by offering the doctor the most precious gift anyone can offer someone who wronged them: her forgiveness. 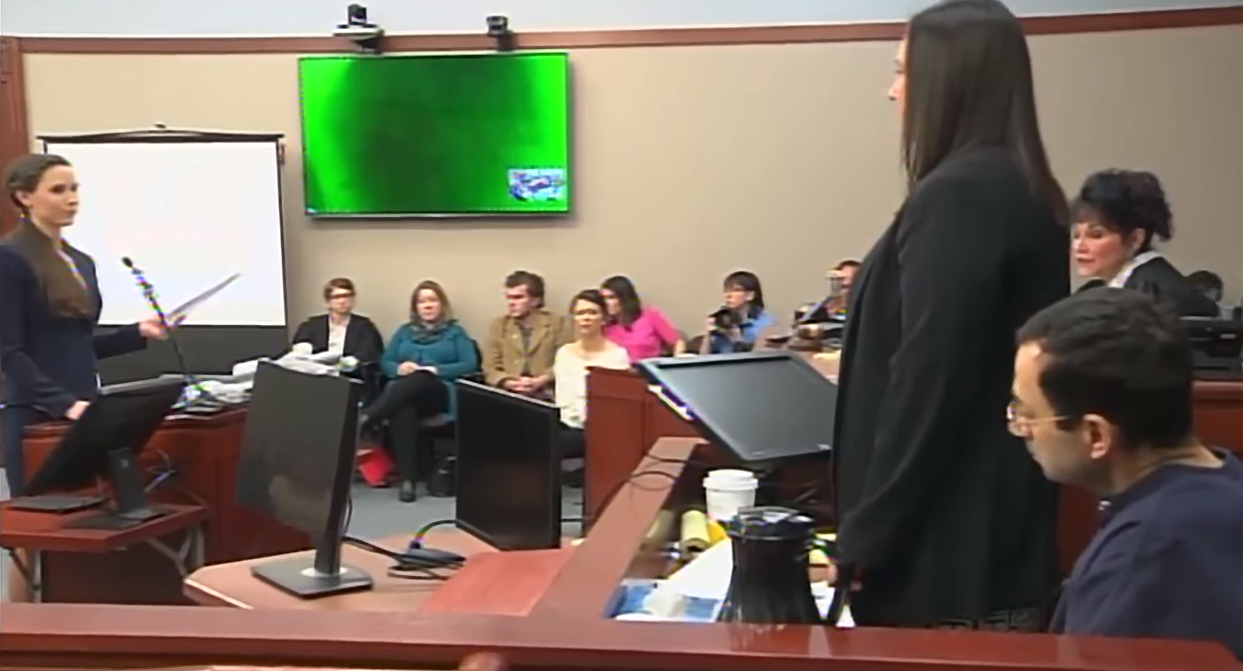 “In our early hearings, you brought your Bible into the courtroom and you have spoken of praying for forgiveness, and so it is on that basis that I appeal to you. If you have read the Bible you carry, you know the definition of sacrificial love portrayed is of God himself loving so sacrificially that he gave up everything to pay a penalty for the sin he did not commit. By his grace, I, too, choose to love this way.”

While many victims of abuse would sooner die than forgive their abuser, Rachael has realized that forgiveness is truly a gift that you give yourself. She does not want Larry to be free, which is why she stood up and told her story to protect other women, but she is no longer burdening herself with the actions of another, damaged human. 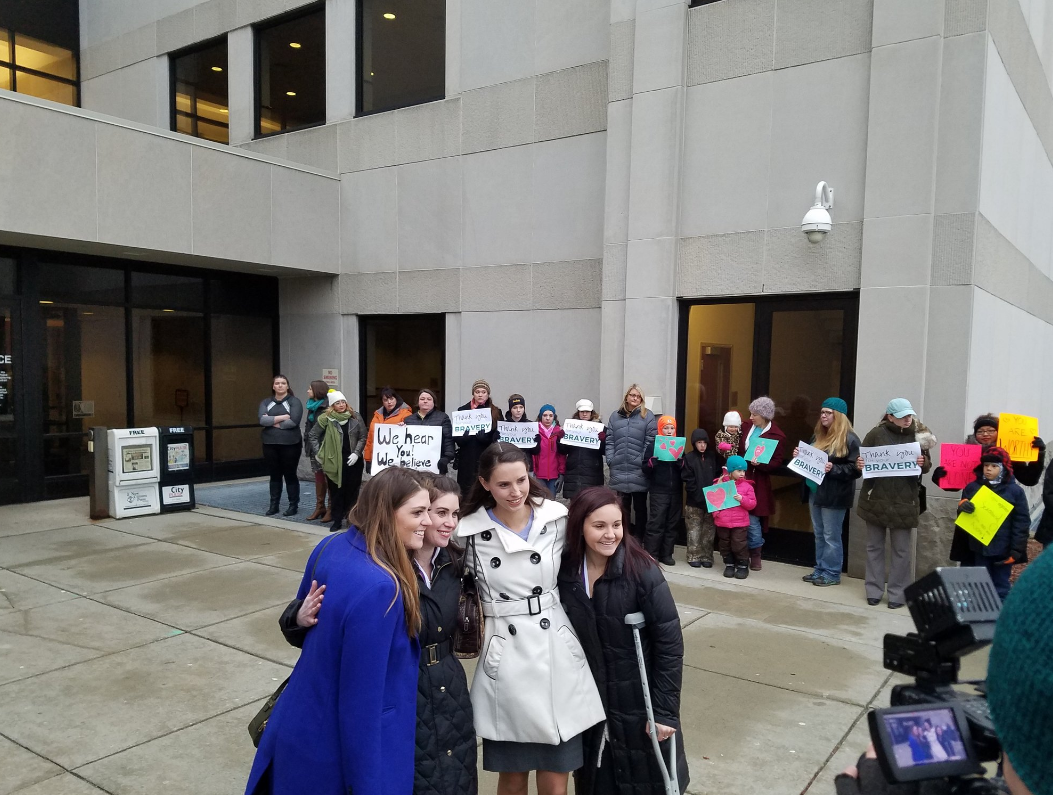 Rachael has truly embraced the philosophy of turning the other cheek. She realizes that her strength lies in her survival and her ability to save others from ever having to go through what happened to her. Her recovery is not about Larry. This is what true strength looks like. 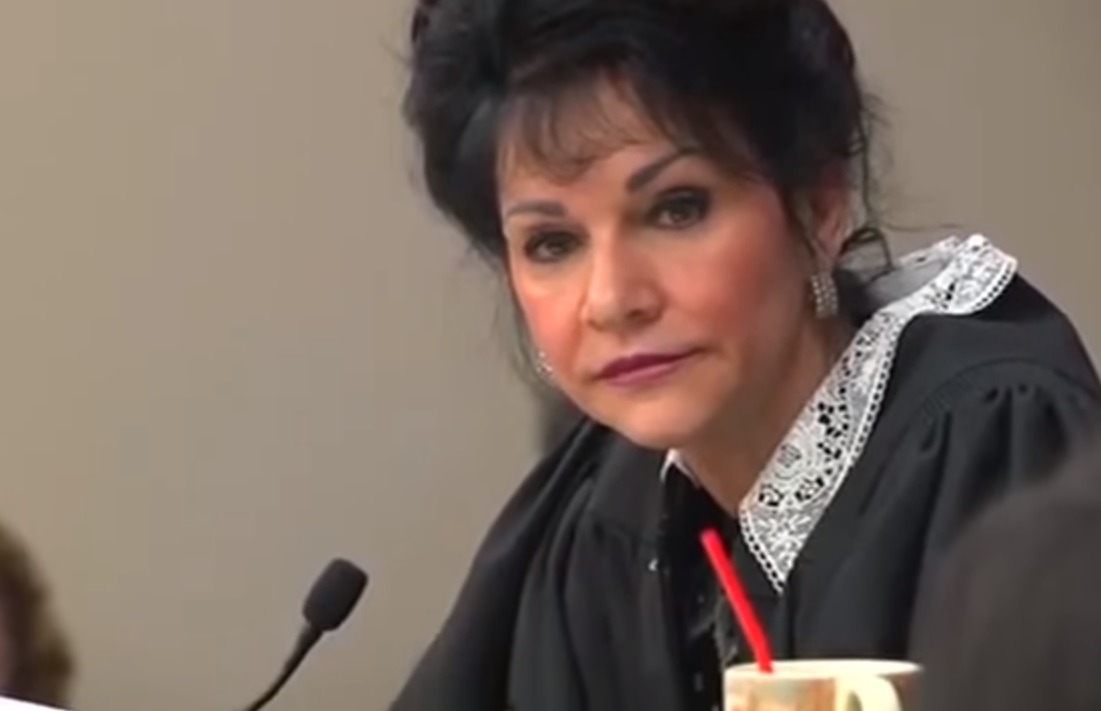 “You started the tidal wave,” Judge Rosemarie Aquilina told Rachael in court. “You made all of this happen. You made all of these voices matter. Your sister survivors and I thank you. You are the bravest person I have ever had in my courtroom.”

“Should you ever reach the point of truly facing what you have done, the guilt will be crushing. And that is what makes the gospel of Christ so sweet. Because it extends grace and hope and mercy where none should be found. And it will be there for you. I pray you experience the soul-crushing weight of guilt so you may someday experience true repentance and true forgiveness from God, which you need far more than forgiveness from me — though I extend that to you as well.” 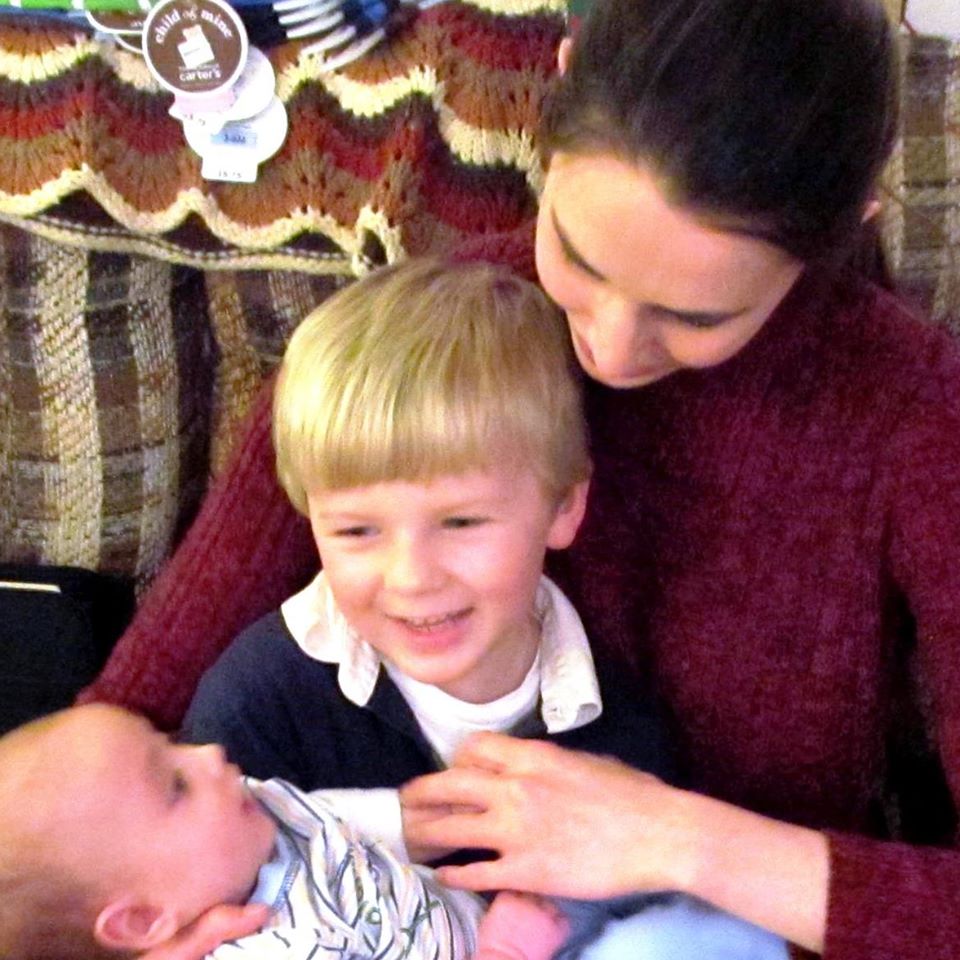 Rachael is now happily married and has two children. Her life seems full and happy, and she should be extremely proud of herself for her brave actions and meaningful sentiments. Larry will spend the rest of his life behind bars. He now knows that at least one of his victims has forgiven him for his sins against her. The question is, can he ever forgive himself?

Watch Rachael’s inspiring statement below, and be sure to share to encourage others to handle life’s misfortunes with grace, forgiveness, and love.