Everyone experiences the world differently. That’s why empathy is so essential!

Pixar explored this beautiful concept in their new short, “Loop,” which follows two teens who embark on a canoeing trip and struggle to understand each other. 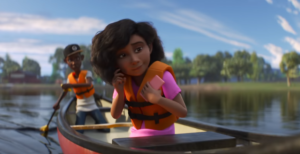 In the five-minute film, a teenager named Marcus is paired with 13-year-old Renee, a fellow camper, for an outing across a lake. Marcus loves to talk, but he quickly realizes his preferred method of communication won’t work for his partner, who is on the autism spectrum and doesn’t speak.

At first, the experience frustrates Marcus, but as he spends more time with Renee, he begins to see things from her perspective — and so do the viewers!

For example, Renee isn’t comfortable with eye contact, so when we’re in her point of view, the camera shifts around Marcus. She also prefers certain sounds over others and is particularly fond of her phone’s ringtone. 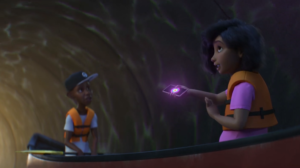 Writer and director Erica Milsom brought in consultants from the Autistic Self Advocacy Network to ensure they accurately portrayed Renee’s experience with autism.

The film team also chose Madison Bandy to play Renee. Like her character, the actress has autism and is mostly nonverbal. They recorded her at her own home and used her vocalizations to show when Renee was feeling excited or scared. 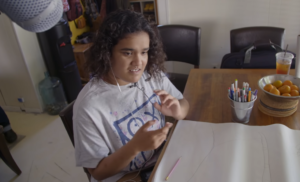 Erica said “Loop” is a great way to encourage empathy and compassion:

I think that when you’re talking about something like people who have big differences, people who have disabilities, that can be seen as uncomfortable or awkward. Doing that in animated format has a really great power of disarming the viewer. I’m really excited to share this film with all audiences. 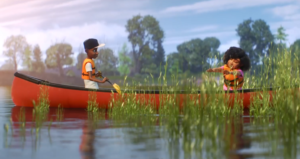 Being able to put ourselves in other people’s shoes is a great first step in making the world a better place. Way to promote neurodiversity and on-screen inclusion, Pixar!

You can watch “Loop” and other shorts on Disney Plus. In the meantime, check out the behind-the-scenes video below, and share this story with your friends.