With flames rapidly approaching the five-acre facility, staff and volunteers at the SPCA of Solano County were literally in a race against time.

The Nelson Fire broke out in Vacaville, California, northeast of San Francisco, on Friday, and officials announced a last minute mandatory evacuation notice. As smoke billowed in the skies above, 67 animals waited anxiously as staff and volunteers scrambled to bring them to safety. 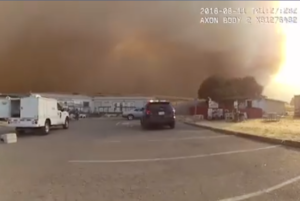 Officer Carly Stone with the Vacaville Police Department captured the frenzied activity on her body cam, which shows her looping leashes around the dogs’ necks and loading three of them into her patrol car. 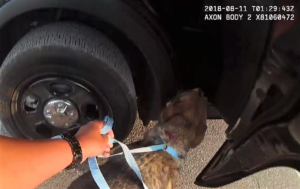 “I had nowhere to put the dogs, they seemed to be happy to be with me, so we just went to work and started evacuating houses for a few hours until I could get them back into the SPCA,” she later said. 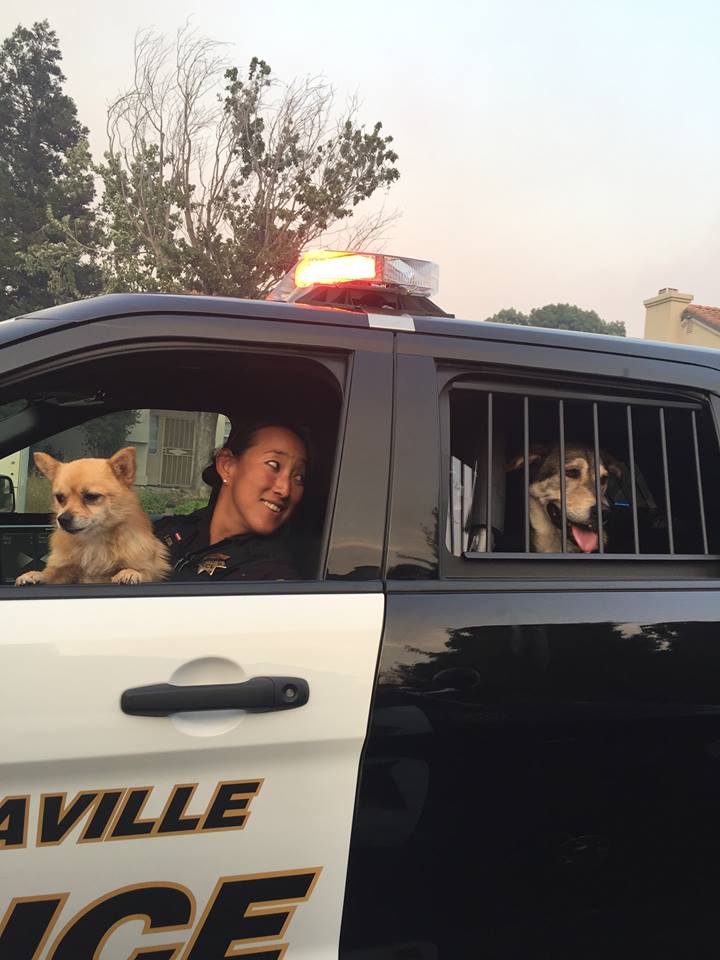 Everyone regrouped in a nearby parking lot and issued a call for help to members of the community. They responded right away with donations of crates, food and bedding, and some even opened up their homes to these furry refugees until the dust settled and they could return to the SPCA. 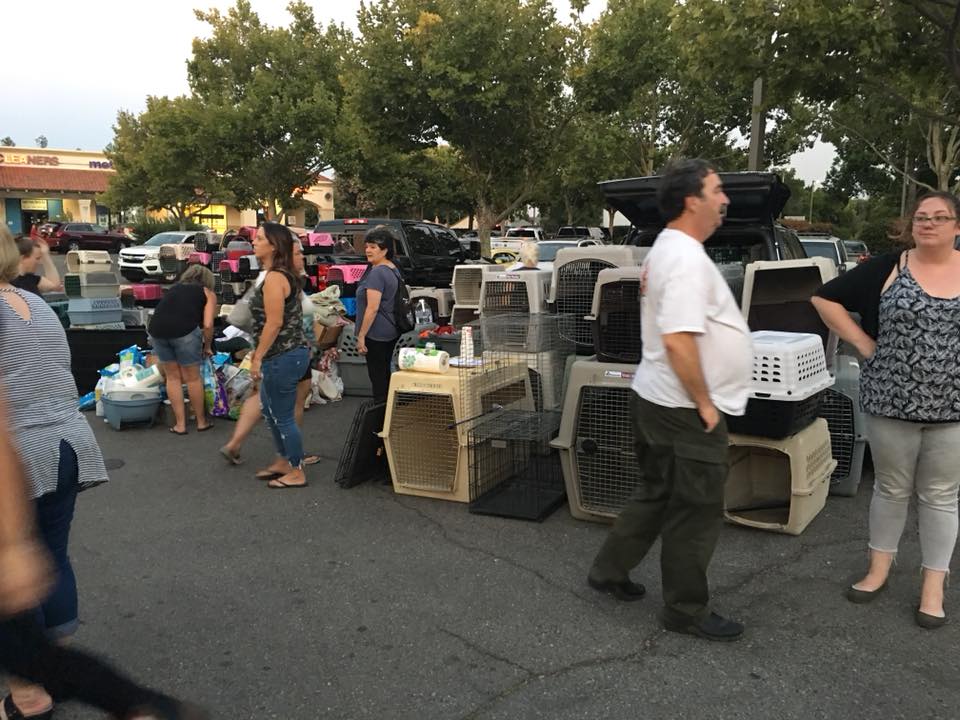 Look how close the fire got! 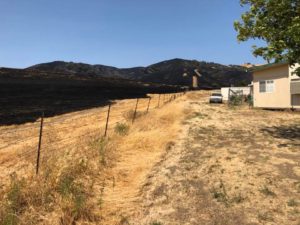 The fire burned more than 2,100 acres before firefighters were able to contain it, but the SPCA was spared and all the animals have since returned. The evacuation turned out to be a blessing in disguise for a dozen or so of the animals. Some of the rescuers fell so in love they decided to adopt!

Including Officer Carly Stone who couldn’t let little Sean out of her sight! 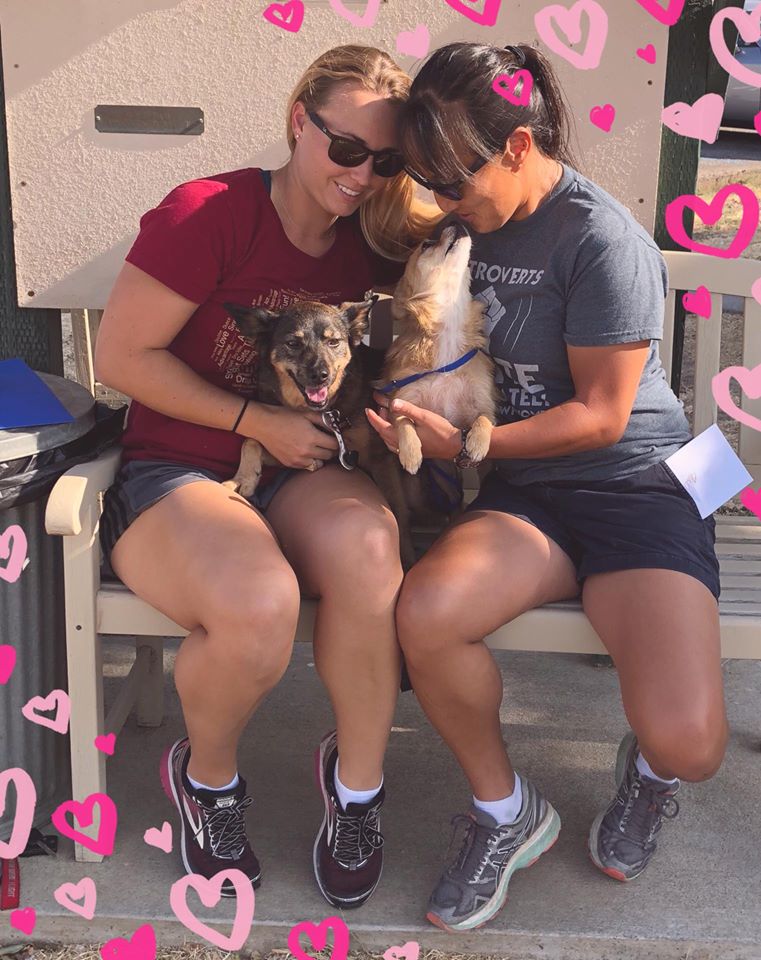 Meanwhile, staff and volunteers are still accepting donations of towels, blankets and money. The facility lost power for two days, and medications, including vaccines, had to be tossed and need to be replaced. To donate, click here. 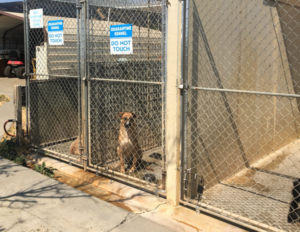 Watch Officer Stone and the other rescuers in action in the clip below, and share to spread thanks that all these animals’ lives were spared!

As the Nelson Fire raced towards the south end of town, it looked like the Solano SPCA would be the first to be hit by the flames. Our officers worked with Humane Animal Services, SPCA staff and volunteers to evacuate all they could in a race against the clock.**Additionally, here is information directly from SPCA Solano's official page:We wanted to give a quick update and thank everyone for their support. We understand that many people are under the impression that we left a volunteer and cats behind last night in the fire. We were forced to evacuate under extremely short notice. Vacaville Police Department was gracious enough to fit as many animals as they could in their vehicles to help us. Unfortunately we were under the impression that all animals were out and safe when we evacuated. We found out later that there had been a few cats still in the cat building. However, fire crews were stationed on our property, outside that building, ready to protect it. The volunteer that was in there went in illegally and crossed the fire line without anyone knowing after we had been out for quite a while. We would never leave a person behind. If we knew he was in there, we would have called to inform first responders to get him out! Once it was deemed safe, shortly after we found out a volunteer was there, two of our staff members were able to be escorted in by the police department to get the remainder of the animals out. All animals are safe in foster homes at this time. Unfortunately we do not have power or water at this time but all 60 of our animals are safe in foster homes for the time being. We are hoping to get in there tomorrow to clean up the ash and debris inside our kennel building and around the property. We thank you all so much for your donations, love, support, and concerns. The Vacaville community has been so gracious to open their homes and hearts for us. If you have pictures from last night feel free to post them on our page.If you are still looking to donate, we will keep you posted as for when we will be able to accept them. Only two staff members were able to go in today and get an idea of where we are at. Fire crews were still working today putting out hot spots and we are grateful for their hard work. We are extremely lucky and thankful to the fire departments and police departments who were on site last night and on the front lines. Thank you!Media inquiries can be directed to Lt. Mark Donaldson @ (707) 975-2486.