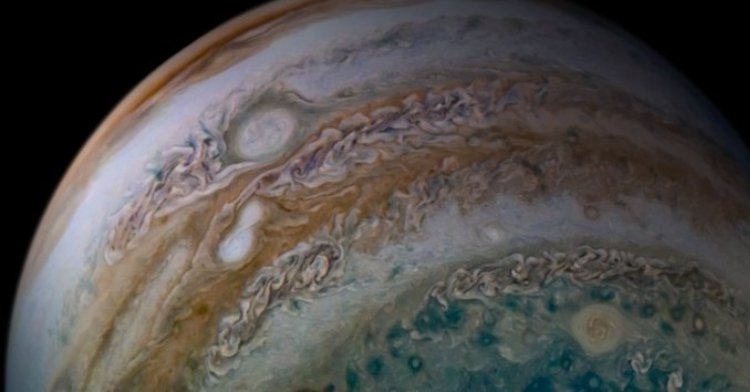 Need something to get your mind off the novel coronavirus pandemic? How about a peek into another world?

Juno, one of NASA’s space probes, has been orbiting Jupiter since 2016, making 26 close flybys, or perijoves, in the past four years. At its closest, Juno is thousands of miles away from the planet, but it still manages to capture some spectacular views! 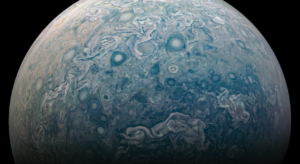 On the Mission Juno website, NASA uploads JunoCam’s raw images to be downloaded and processed by the public and then shares the enhanced photos. The shot below is the work of Gerald Eichstädt. It features fascinating swirling patterns that we could stare at for hours.

“The intriguing streaks in this recent view of Jupiter are hazes floating above the planet’s cloud tops,” NASA explained in a tweet. “Scientists don’t know exactly how they form, at least not yet.” 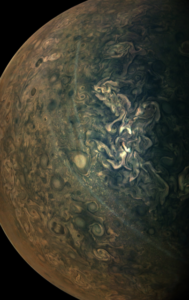 Another photo, processed by Tanya Oleksuik, highlights two anticyclonic storms merging in Jupiter’s atmosphere. NASA called the event remarkable and explained that it “interests scientists because the ovals had approached each other months earlier, only to move apart again.” 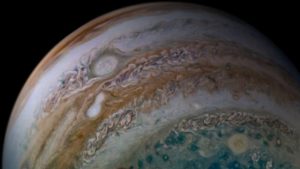 Following Perijove 16 in 2018, Seán Doran enhanced the image below. If you look carefully, you’ll see the shape of a dolphin that could be jumping out of ocean waves! 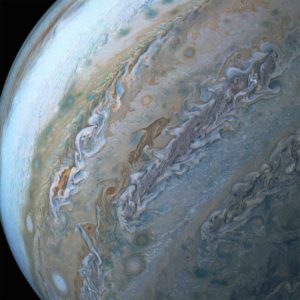 Each of these captures the beauty and mystery of our solar system’s largest planet. We can’t wait to see more of them, especially since Perijove 26 just took place on April 10! 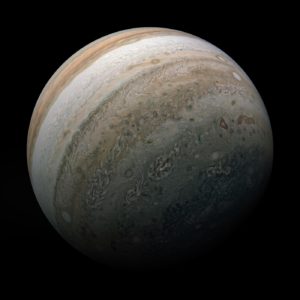 What a gorgeous planet! If you want to see more, check out the other image enhancements here. You can also keep up with Juno’s mission on Twitter.

Share these breathtaking images with your friends so they can appreciate Jupiter’s beauty.