After Serbia banned the use of wild animals in circuses, a bear named Napa spent seven years confined in a bare, concrete cage.

In 2016, he was finally rescued and brought to a Serbian zoo. His handlers lovingly nursed him back to health, and thanks to a protein-rich diet, he eventually bulked up to a healthy weight of more than 700 pounds! 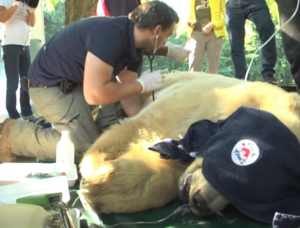 That was a whole lot of bear for an international team of experts to transport when it came time to move him yet again… but the struggle was most definitely worth it! In July, after a thorough medical checkup and 28 hours of travel across nearly 1,000 miles, Napa became the first resident at Arosa Bear Sanctuary, a brand-new facility in the picturesque Swiss Alps.

An international rescue group, Four Paws International, coordinated the relocation. Four Paws describes the sanctuary as a three-hectacre site “with numerous enrichment opportunities, ponds and trees for up to five bears. The geographical location of the sanctuary with altitude, slope and natural vegetation offers a habitat that is very close to the natural environment of the animals.” 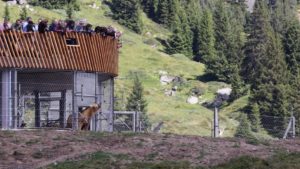 “It was hard for us to part with him as we had grown to like him,” said Kristijan Ovari, a curator at Palić Zoo. “He is very intelligent, very curious. He’s always the first there to see what’s happening.”

Napa’s only been at his new home for a few months and he’s still taking it all in. And since he’s surrounded by such breathtaking natural beauty… 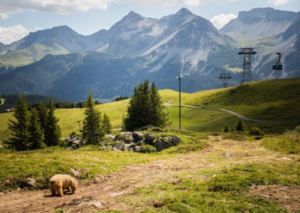 There’s a lot to take in! 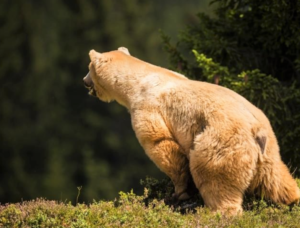 Jeta Lepaja, a spokesperson for Four Paws, says it could take up to a year for Napa to get acclimated to his new surroundings, so only time will tell whether he’ll actually hibernate this winter. But in the meantime, he got to experience his first snowfall  just this month!

Remember the first time you ever lifted your face as snowflakes dropped from the sky and felt them melting on your skin? Imagine, as innately curious as he is, how it must have felt for Napa to have that same experience, watching soft specks of snow drift down and melt on his thick brown coat and dark muzzle! He looks a little disoriented down there, like he’s not quite sure what to do… 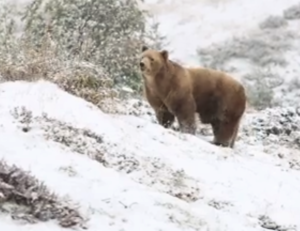 But it didn’t take long for this lucky bear to take full advantage of his first real snow day, using the opportunity to play with a snow-covered log: 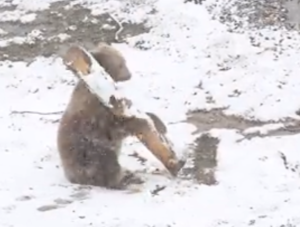 And using a tree’s canopy for shelter so he could just quietly soak in the peaceful scene unfolding before his very eyes: 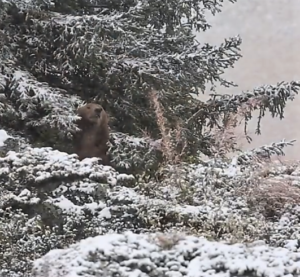 Watch his joyful reaction to the unexpected white stuff in the video below, and share to spread thanks to everybody who helped make this dream a reality!

Napa and the snow

Napa? had a blast and enjoyed the first snow❄️ at Arosa Bear Sanctuary (Arosa Bärenland), his amazing forever home last week! We could watch this video over and over again… ?