It’s a feeling no pet parent wants to experience: that jolt of panic when you realize your furry friend is missing.

Dread overtook the Gomez family as they frantically searched near their home in Milwaukee, Wisconsin. Both of their dogs had disappeared from their yard. Now it was midnight and neither were anywhere to be found, lost in the December cold.

A little over two miles away, Milwaukee County Transit System bus driver Jamie Grabowski was finishing up her shift. That’s when she noticed a pit bull and a Doberman pinscher running in and out of the street. 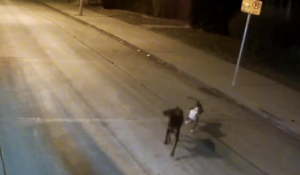 An animal lover herself, Jamie couldn’t leave them there. So she stopped the bus and opened the front door.

“Hey, you two! You need to go home right now,” she could be heard saying on CCTV footage. “C’mon, c’mon inside!”

Jamie ended up having to go outside, but she had no problems guiding the dogs on board. They were more than happy to get out of the cold! 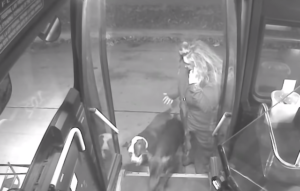 The two good boys waited very patiently inside as Jamie alerted MCTS dispatchers, who then notified police. They must have known she wanted to help them find their family.

Jamie likes to joke that she’s a “dog whisperer,” but it clearly wasn’t a joke to her new friends! One of them thanked her with a kiss as the trio waited in the bus for an officer to arrive. “My dogs are going to be so mad when I get home,” she jokingly told the pups as they showered her with love. And finally, after the officer took the dogs to the Milwaukee Area Domestic Animal Control Commission, they were reunited with their owner, Stephanie Gomez. 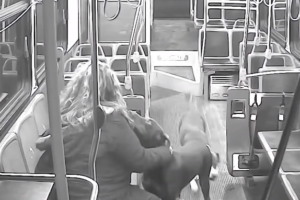 Stephanie got the chance to thank Jamie a few days later — as did the dogs! She explained that they’d slipped out of the yard just seconds after her mother took them out for a bathroom break.

“I thought we weren’t going to see them again,” she said. “We were all panicking at the moment because basically these are our kids.” 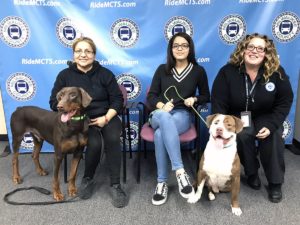 If Jamie hadn’t stepped in, there’s no telling what would have happened to these sweet dogs. We’re so glad they’re back home and safe! Jamie may go by the title of bus driver, but the Gomez family knows her better as their hero.

Check out more cute footage from the rescue below, and share this happy ending with your friends!