To call Matthew Cosman’s children lucky is quite the understatement.

After all, their father is a perfect contender for dad of the year! Back in 2015, the professional fabricator and experienced aerospace engineer set out to build his kids the ultimate backyard playground — on top of a dinosaur! And he didn’t disappoint!

The dinosaur was created using a skeleton of structural steel, along with wood, foam, and chicken wire to give it shape. Matthew used Kevlar to make the tail strong enough to hold swings, while carbon-infused fiberglass and epoxy kept the rest of the body sturdy.

Finally, the innovative dad used homemade clay and ceramic fillers to give his masterpiece color and texture.

“This was done just for fun,” he said. “I did it with a lot of planning and scraps hoarded over a decade knowing this was in the future list of projects.”

Then came the tricky part: moving the dinosaur from Matthew’s shop to his backyard. He ended up using a crane to place the giant beast and secured it to the ground with 24,000 pounds of concrete. Yes, you read that right!

His kids were already in love after testing out the swings, but Matthew wasn’t finished yet! 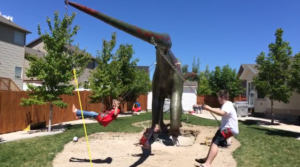 He still had to add ladders, ropes, a “crow’s nest,” and other typical jungle gym features. 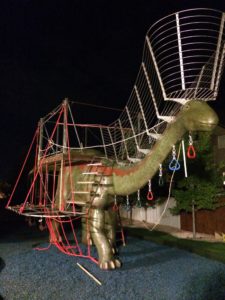 That said, his playground is anything but typical! He even made sure the slide would glow with rainbow lights, although he said the credit shouldn’t all go to him. 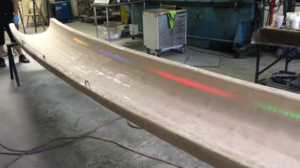 “My brother and sister, who are both more artistically inclined, helped a bunch,” he said. “We also had all our kids help as well so that they could feel a part of it.”

At the end of the day, the family was left with a 48-foot piece of art that quickly became the envy of the neighborhood. 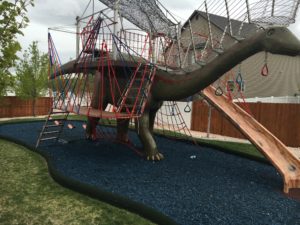 It even transformed into a magical paradise at night! 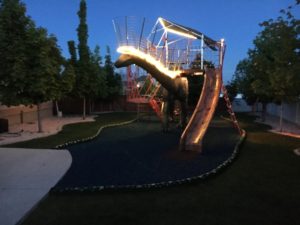 It’s official: Matthew is the most creative dad ever! What a fun project!

Check out the entire process in the video below, and amaze others by sharing this epic creation.