Not many people can say that they’ve held down the same job for twenty-five years.

Yet Mark Adams of Orillia, Ontario, Canada can say just that. In fact, Mark has become such a local celebrity at the Home Hardware store where he’s worked for over two decades that there isn’t a soul in town who doesn’t consider him a friend. 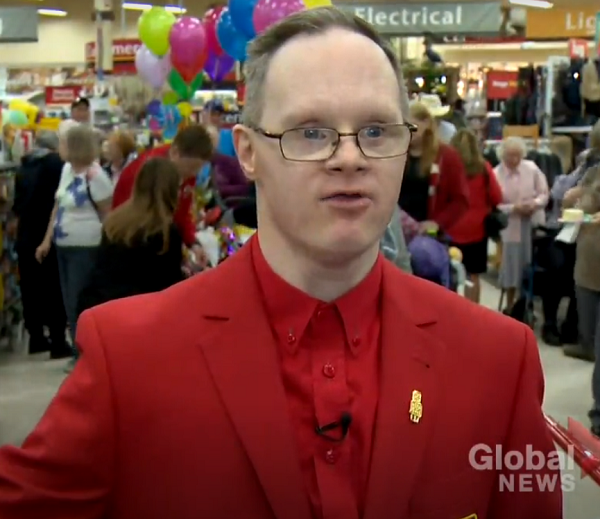 Mark was born and raised in the small town and has worked as a door greeter since high school. Mark’s memory is as sharp as a tack and he greets every customer by name, recalling even the smallest details about their lives. With his strong work ethic and quick wit, Mark has become an invaluable member of the Home Hardware team.

“Mark is family,” said Chris Locke, owner of Home Hardware. “Mark is the kind of guy that brings a smile to our face every single day and it was just a given we were going to do something to honor his 25 years.”

Honor it they did, filling the store with colorful balloons and inviting area residents to come by to celebrate their friend’s work anniversary. Orillia Mayor Steve Clarke even stopped by to honor Mark, presenting him with a plaque and declaring his work anniversary, May 6th, “Mark Adams Day” throughout the town. 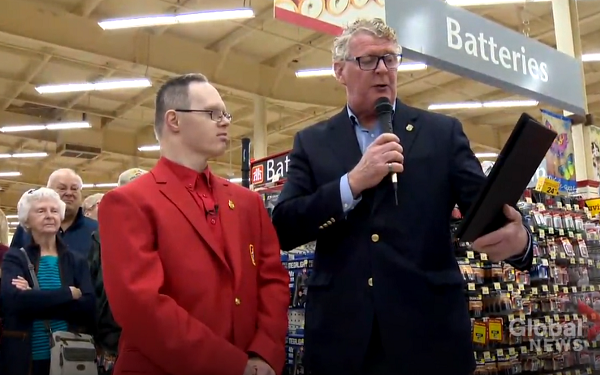 “You get to attend many events as mayor but this day in particular stands out,” Mayor Clarke stated. “This is a sunshine city and Mark literally brings sunshine in everybody’s lives on a daily basis as soon as you walk through this door.”

Mark was also presented with a red suit jacket that is just like the one worn by some managers in the store. In spite of all the praise, Mark says it’s the people he sees every day that keeps him smiling after all these years on the job.

“The best part of my job is to meet customers,” he said. “Customers are really very nice and very friendly.” 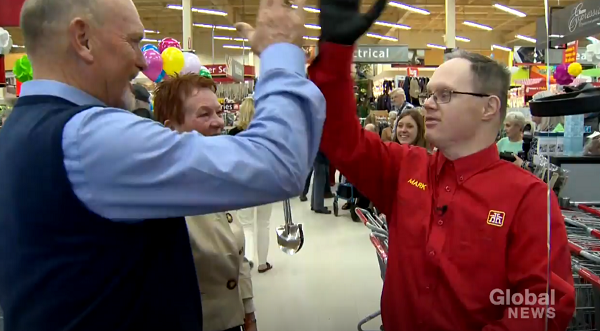 Mark’s boss Chris says that he hopes shining a light on Mark’s many years of service to his company will encourage other business owners to welcome people with Down syndrome and other special needs into their workforce.

“It wasn’t a stretch to bring in somebody like Mark. Folks out there with Down syndrome and with learning disabilities … can be productive members and he’s an incredible part of this team,” he said. “I would encourage other people to do the same with other folks in their community.” 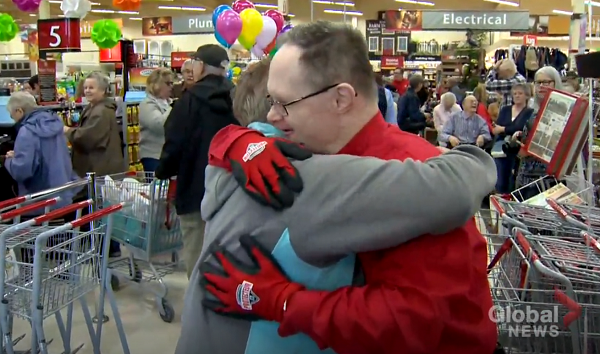 Great work, Mark! Mark is living proof that people can accomplish anything they set their minds to doing regardless of their different abilities. A naturally gregarious and friendly person like Mark is a valuable asset to any company that is smart enough to offer him a job!

Don’t forget to share to celebrate Mark Adam’s spirit with your friends.