Most teenagers struggle to fit in, but the experience is literal for Kylon Owens.

The 17-year-old is 6 feet 9 inches tall. While his height makes him a star high school basketball player in Dallas, Texas, it also makes clothes shopping a daunting (and expensive) task for him and his parents. Thankfully, a department store stepped in to help him prepare for prom this year! 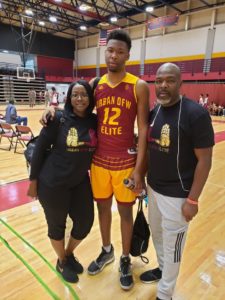 After hearing about the senior’s incredible upcoming achievements, which include being valedictorian and graduating with both a high school diploma and an associate’s degree, J.C. Penney decided it was time to show Kylon some love. So they organized a suit fitting for him at their Hurst location.

What the representatives didn’t mention was that a special visitor would be joining them — Shaquille O’Neal! 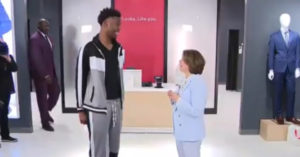 The 7-foot-1-inch former NBA star and J.C. Penney brand ambassador understands just how hard finding the right outfit can be. As a teen, he also struggled to buy clothes and shoes, so he was more than happy to help Kylon out. 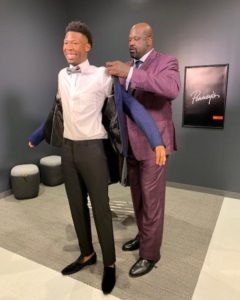 O’Neal picked out a few different suits before Kylon found his match on the third try. Then O’Neal gave him something even better than a snazzy look: wisdom.

“Listen to my parents,” Kylon said. “He told me to always listen to them and keep the ones that love me close.” 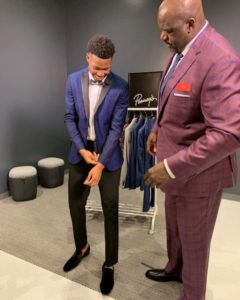 The experience encouraged Kylon to pursue his dream of playing in the NBA.

“I feel very special today,” he said. “He was like me once, so I know that it’s possible to be someone like him one day.”

Photo by @vernonbryant | South Oak Cliff’s Kylon Owens got a big surprise today when he was invited to a big & tall wardrobe fitting at a @jcpenney location in Hurst: @shaq was there! He was also joined by J.C. Penney CEO Jill Soltau. You can find video of the event on our Facebook and YouTube pages. 📹

As for O’Neal, watching Kylon light up was a reward in itself: “It’s just about making people happy.” 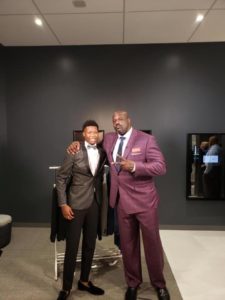 Way to show your fans you care, O’Neal! Even after retiring from your basketball career, you continue to be a wonderful role model.

Watch Kylon meet his idol in the video below, and don’t forget to share his story with your friends.

A BIG surprise for a deserving young man. @KingKylon is a senior at South Oak Cliff HS in @dallasschools. @SHAQ and @jcpenney made his day with some big and tall suits. Tonight, Shaq will watch him play. @FOX4 pic.twitter.com/mz5FZ23o5L