For the past four years, Kimball Miller has been Sugar-Salem High School’s basketball team manager, which means he’s had plenty of time to bond with the players and coaches.

To them, the Idaho senior, who has Down syndrome, is part of the team, so they make sure he gets a chance to play in a game each year. Recently, they put him in with just 7.7 seconds left on the clock, and he nailed it! 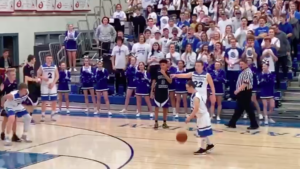 Their head coach wasn’t sure Kimball would get a chance to go in that game because the scores were close. “It wouldn’t have been fair … to Kimball to put him in a situation that wasn’t conducive,” he said.

So he told the rest of the team they needed to get ahead so Kimball could have a shot, and that’s exactly what they did! With mere seconds left, they subbed him in and watched him make the game-winning basket! 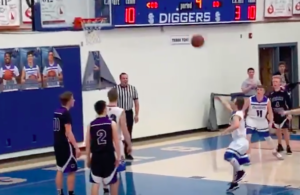 As soon as he did, everyone went wild! His friends rushed the court to lift him up on their shoulders and carry him across the gym.

“In all the crazy of the world, there are still amazing people out there,” a fan wrote later. “He had an amazing moment, which was made even better by scoring the last two points of the game. Sugar-Salem and Snake River should both be commended on letting this special kid shine!”

Of course, Kimball is handling everything with grace. “He was really proud of what he had done with his friends,” his mom Ruth said. “He loves basketball, and it meant a lot to him to just be a part of it for a moment.” 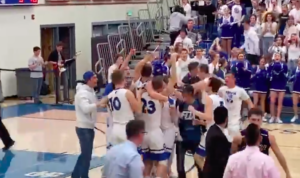 What a moving display of teamwork and support. Keep up the great work, Kimball!

Watch his buzzer shot in the video below, and be sure to share this heartwarming story with your friends.