Being a parent means so much more than bringing a child into the world.

It means putting everything else aside and making your kids your top priority. It often calls for you to sacrifice your wants and needs for the well-being of your little ones. It also involves desperately trying to shield your babies from the same hurt you felt in your past. 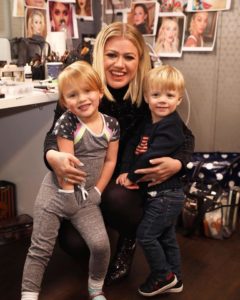 Singer-songwriter Kelly Clarkson knows all about childhood trauma. She was a little girl when her parents divorced and her father abandoned her at just 6 years old. Their relationship has largely been non-existent ever since, though it’s been the inspiration behind some of her songs, including “Because of You” and “Piece by Piece.”

During her Meaning of Life tour, it became very clear to Kelly’s audience just how much the latter song means to her in regards to her kids.

At a recent stop on the tour, Kelly, who shares two stepchildren and two biological children with her husband Brandon Blackstock, performed in Los Angeles. As she sang the ballad’s bittersweet lyrics about how Brandon restored the faith in men her father had broken for her, she couldn’t help but get choked up.

But piece by piece, he collected me up
Off the ground, where you abandoned things
Piece by piece he filled the holes that you burned in me
Six years old and you know
He never walks away
He never asks for money
He takes care of me
‘Cause he loves me
Piece by piece, he restored my faith
That a man can be kind and a father could, stay.

Kelly hesitates and tries to shake it off. But eventually, she stops mid-song to collect herself, explaining to the audience that she’s losing her composure because her children are in attendance. 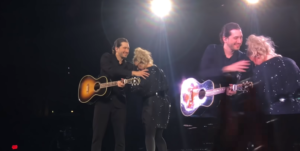 “I’ve been fine the last two shows. My kids are at this one,” she says after wiping away tears. “Once you have kids, it’s one of those things that I can’t even fathom — about not sticking around and caring. I just can’t even fathom.”

Nobody can fault Kelly, or any parent, for wanting better for her children. That’s what makes her such a great mom! Thanks for always keeping it real with your fans, Kelly. You’re such a genuine person.

Watch as Kelly performs the emotional song in the video below, and be sure to share with other caring parents.