Jade Kilduff has always been her brother’s biggest supporter, and now the 18-year-old is on a mission to make life easier for children like him.

While there are 14 years between them, the siblings couldn’t be closer. Part of that has to do with how they communicate. Christian has cerebral palsy and a visual impairment, both of which were caused by a brain injury. But the 4-year-old is a happy little boy, especially when he’s signing songs with his sister. 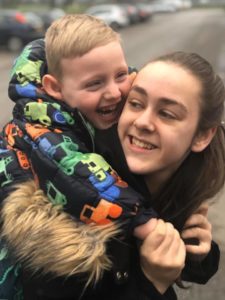 “We were told that Christian would never be able to communicate,” Jade said. “I taught him sign language so then he could talk and he’s here, a little miracle, proving everybody wrong.”

Today, Jade hopes to spread sign language around the world so people with special needs can make connections more easily. One of the ways she’s doing that is by sharing videos of the two of them. Recently, another platform opened up to them — as did the chance to send an even bigger message.

They’re part of a choir called Sign Along With Us, which is comprised of children and adults with special needs. This year, their group decided to audition for “Britain’s Got Talent,” and their performance of “This Is Me” from “The Greatest Showman” left everyone watching in tears! 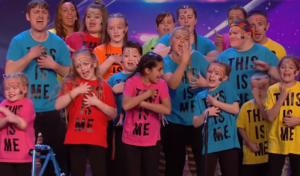 As they sang and signed together, their message came through loud and clear: We are amazing just as we are! When they finished, celebrity judges Simon Cowell, Amanda Holden, Alesha Dixon, and David Walliams were floored.

“That song is such an anthem for people who maybe don’t feel part of the world or part of anything,” Holden said. “I just found it really, really moving. It was absolutely brilliant.”

Cowell added, “You’re saying, ‘This is me,’ and I’m thinking, ‘You are us,’ because you define what the show should be all about.” 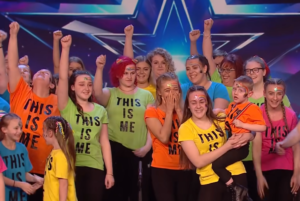 But the best feedback came from Walliams, whose gesture had the world cheering.

“Every one of you gave everything to this performance,” he said. “It was an amazing, positive message for people out there, and all I can say is…”

He hit the Golden Buzzer and sent them straight to the semifinal! 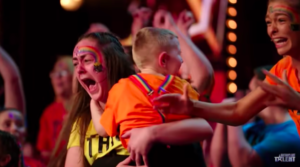 If anyone deserves to shine their light on the show, it’s this wonderful group! Jade and Christian have already touched countless hearts, and now they’ll be able to make an even bigger difference. We’re rooting for you, Sign Along With Us!

Watch the powerful audition in the video below, and share their story with your friends.