When they were Freshmen at Tulane University in New Orleans, Jackson Smith and Brian McKenna instantly became best friends. They shared the same interests, sense of humor and life in general. After college, Smith enrolled in the Marines and McKenna explored his adventurous side.

A huge part of their friendship was in their love for the Saints. In 2009, when Jackson in Afghanistan, the team historically won the Superbowl. But Brian wouldn’t let his best friend miss out on the celebration, no matter how far away he was.

With a full-size, cardboard cut out off his best friend, Brian went around Mardi Gras taking pictures with anything and anyone. He even got a picture with Drew Brees! That made up for missing the game. 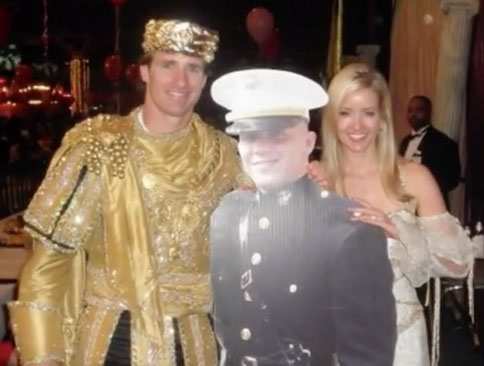 A little while later, though, Brian had a tragic accident while mountain biking.The injury left him paralyzed from the neck down.

Immediately, Jackson came to his side to give him any support possible, never letting his positive attitude fall short. But there wasn’t a need to provide that spirit for Brian, too, because his friend still smiled and was thankful, even with his paralysis.

“I have a positive outlook, and I try to make it fun, as crazy as that sounds,” says Brian.

Ellen heard of these two friends’ inspirational story and invited Jackson and Brian on the show to represent them both. She points out that having self-pity is easy, but being thankful is what life’s all about.

Their outlook amazed her.

Watch below and share their incredible story of friendship!