Motherhood isn’t for the faint of heart, especially when you’re juggling child-rearing and working a full-time job.

As if that doesn’t sound tough enough, imagine being a touring musician with an infant and no reliable babysitter. Impossible, right? Well, luckily for Haruka Kikuchi, her supermom powers include performing with a baby on her lap! 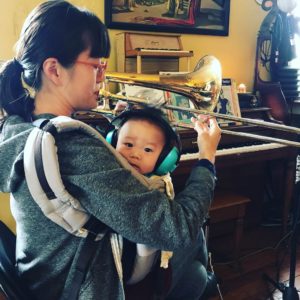 Haruka has been playing the trombone for nearly two decades and currently belongs to Shake ‘Em Up, a six-woman New Orleans jazz band. When she got pregnant with her son, Shouta, she played right up until her due date. And the 32 year old was back at it not long after.

When the band recently went on a two-week tour of Europe, Haruka and her husband weren’t sure what to do with Shouta. The eight month old couldn’t stay home as his dad is also a very busy musician, and they couldn’t afford to bring a babysitter on tour.

After talking it over, Shouta’s parents agreed it would be best for him to go with his mom, who says the decision eased her mind. And her band mates were more than happy to lend a hand! 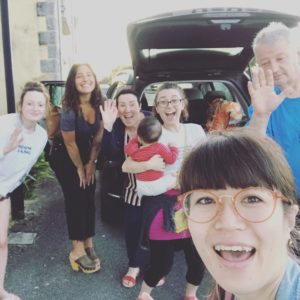 “It’s like he has five aunties,” Haruka told Good Morning America. “Everybody helps me on and off the stage.”

Still, there was one time nobody could watch Shouta. Haruka and the band were scheduled to perform at Herräng Dance Camp in Sweden, so our supermom simply placed headphones over Shouta’s ears and played, balancing her son and her instrument, completely undeterred. And she did a fantastic job! 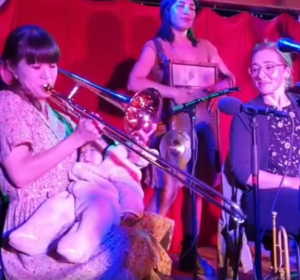 Thanks to his headphones, the loud music didn’t bother Shouta at all. In fact, he slept through the majority of his mom’s performance! Unsurprisingly, the audience loved him. 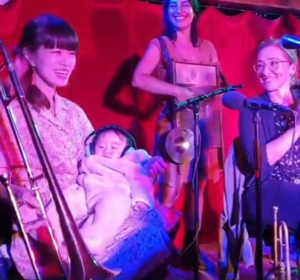 While this was a one-time occurrence because Shouta will be walking soon, Haruka says the experience was amazing. The best part? She didn’t have to miss her son one bit!

“Everybody smiled at my baby, and my baby is such a happy baby that he smiled to everybody,” she said. “I felt so much better during the tour with him there.”

Mothers really are superheroes. Watch Haruka nail her solo as Shouta snoozes peacefully below. Share to celebrate all the hardworking moms out there who do so much every day!