One star college football player made a big play off of the field that made a huge impact in the life of one little boy and it is now  inspiring others. Florida State’s Travis Rudolph spotted a young boy eating alone at lunch and decided to sit with him and have a few slices of pizzas. The kind act has gone viral because of a heartfelt Facebook post by the boy’s mother, Leah Paske, who revealed her son Bo has autism. Leah says she often worries about middle school being a scary and hard place, especially for Bo.

When a group of Florida State Seminoles football players came to Bo’s school, she had no idea that the star wide receiver would take the time to sit with her son. She was so overwhelmed by Rudolph embracing her son that she took to Facebook to share a photo of the two and pour her heart out in gratefulness. 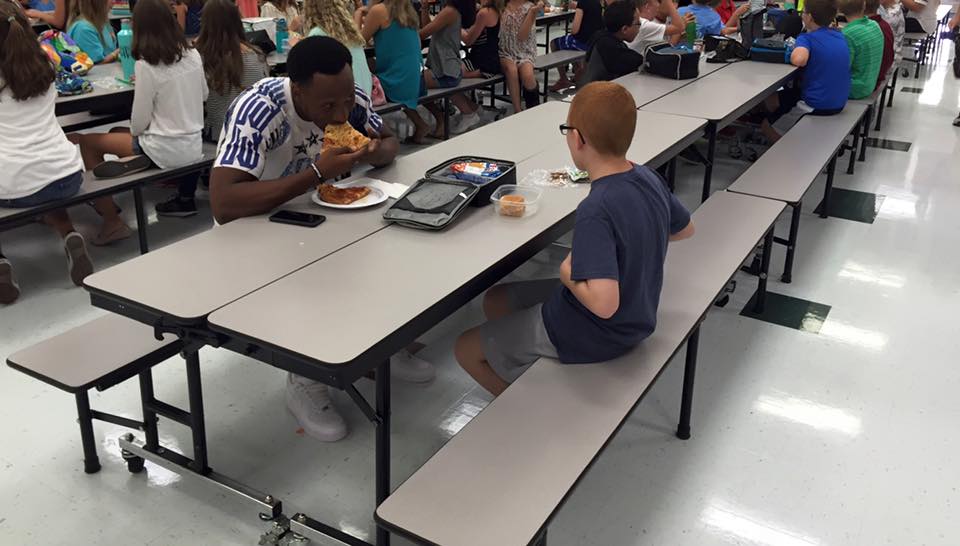 “I’m not sure what exactly made this incredibly kind man share a lunch table with my son, but I’m happy to say that it will not soon be forgotten,” said Leah. “This is one day I didn’t have to worry if my sweet boy ate lunch alone, because he sat across from someone who is a hero in many eyes.”

Here is the entire sweet message posted on her Facebook page:

Several times lately I have tried to remember my time in middle school, did I like all my teachers, do I even remember them? Did I have many friends? Did I sit with anyone at lunch? Just how mean were kids really? I remember one kid on the bus called me “Tammy Fay Baker” bc I started awkwardly wearing eye liner in the sixth grade, I remember being tough and calling him a silly name back, but when he couldn’t see me anymore I cried. I do remember middle school being scary, and hard. Now that I have a child starting middle school, I have feelings of anxiety for him, and they can be overwhelming if I let them. Sometimes I’m grateful for his autism. That may sound like a terrible thing to say, but in some ways I think, I hope, it shields him. He doesn’t seem to notice when people stare at him when he flaps his hands. He doesn’t seem to notice that he doesn’t get invited to birthday parties anymore. And he doesn’t seem to mind if he eats lunch alone. It’s one of my daily questions for him. Was there a time today you felt sad? Who did you eat lunch with today? Sometimes the answer is a classmate, but most days it’s nobody. Those are the days I feel sad for him, but he doesn’t seem to mind. He is a super sweet child, who always has a smile and hug for everyone he meets. A friend of mine sent this beautiful picture to me today and when I saw it with the caption “Travis Rudolph is eating lunch with your son” I replied “who is that?” He said “FSU football player”, then I had tears streaming down my face. Travis Rudolph, a wide receiver at Florida State, and several other FSU players visited my sons school today. I’m not sure what exactly made this incredibly kind man share a lunch table with my son, but I’m happy to say that it will not soon be forgotten. This is one day I didn’t have to worry if my sweet boy ate lunch alone, because he sat across from someone who is a hero in many eyes. Travis Rudolph thank you so much, you made this momma exceedingly happy, and have made us fans for life!

Her moving post went viral and so many have been touched by his kind act.

Kenny Morales of WCTV followed up with the star to see what his reaction was to the Leah’s words.

Just spoke with #FSU WR Travis Rudolph. He told me he read the mother’s post before practice and that it nearly brought tears to his eyes.

Travis Rudolph: “He’s a cool person, I’ll hang out with him any day. And for the mom, if he needs my (cell) number, he can get it.” #FSU

It just goes to show a slice of pizza and a kind heart can go a long way. Travis Rudolph, you are a star on and off of the field!

Jake Larson of Martinez, California, lost his beloved wife of over 50 years back in 1991. The World War II veteran, whom his family knows as "Papa Jake," is now...