Animal rescuers see some of the worst cases of animal abuse and neglect out there, but when a severely matted dog was brought into the Nebraska Humane Society they weren’t sure what to make of her.

After Ellie Mae’s owner passed away, people came to clean out the house. They didn’t even know that a dog lived in the residence. When they found the gray, matted creature that would turn out to be the shih tzu mix,  they couldn’t even tell which end was which. 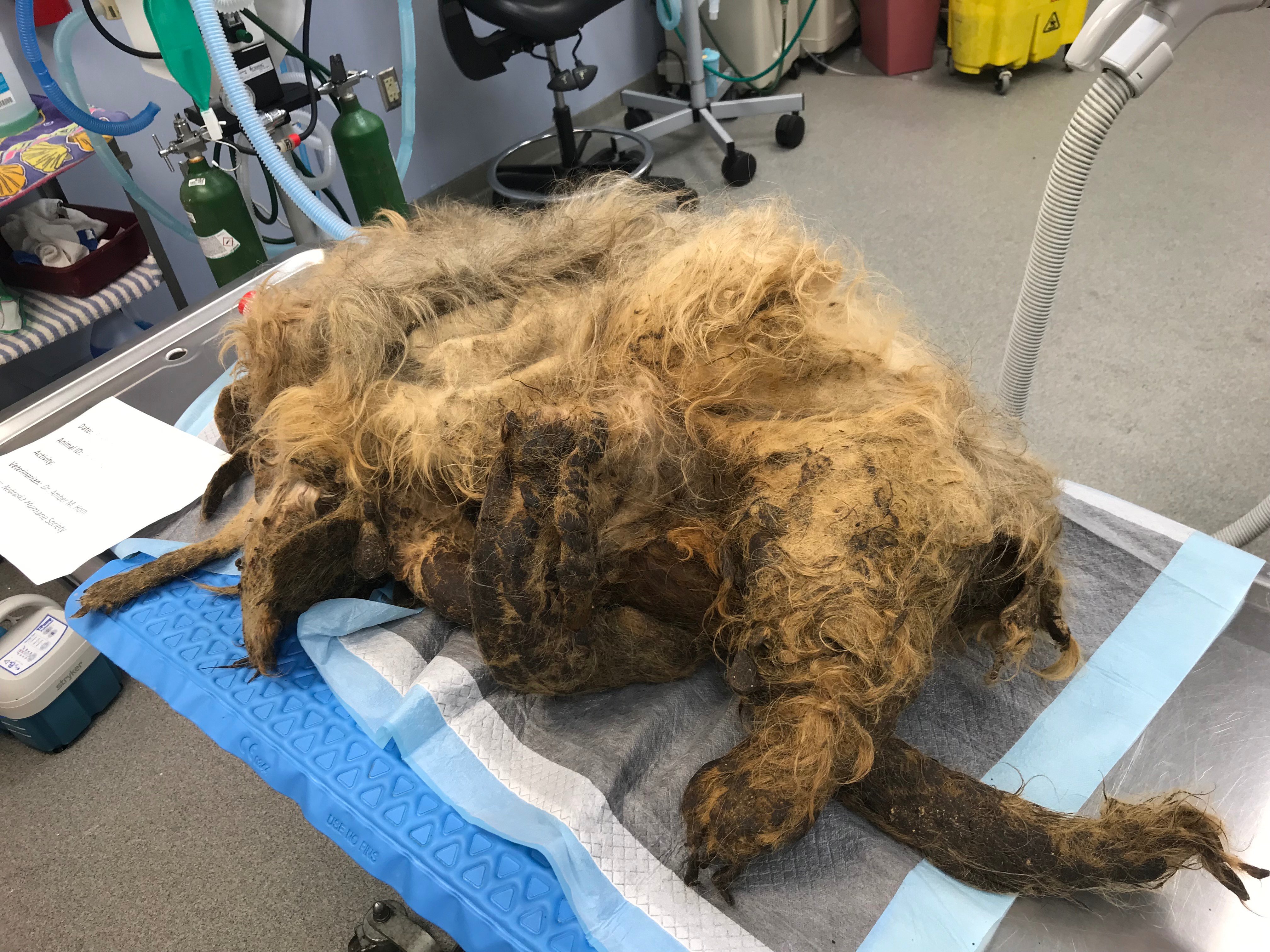 “We were dumbfounded at her condition when she came in,” explained NHS representative Pam Wiese. “They put Ellie in a storage tote to transport her to the Nebraska Humane Society because she couldn’t walk. Our staff didn’t know what she was, or that she was even a living animal, until her head moved. She was very uncomfortable.”

Staff members immediately got to work preparing anesthesia. Her fur was so matted they knew they’d have to put her under to remove it, but it was difficult to even gauge how much she weighed due to the extra pounds of smelly fur. 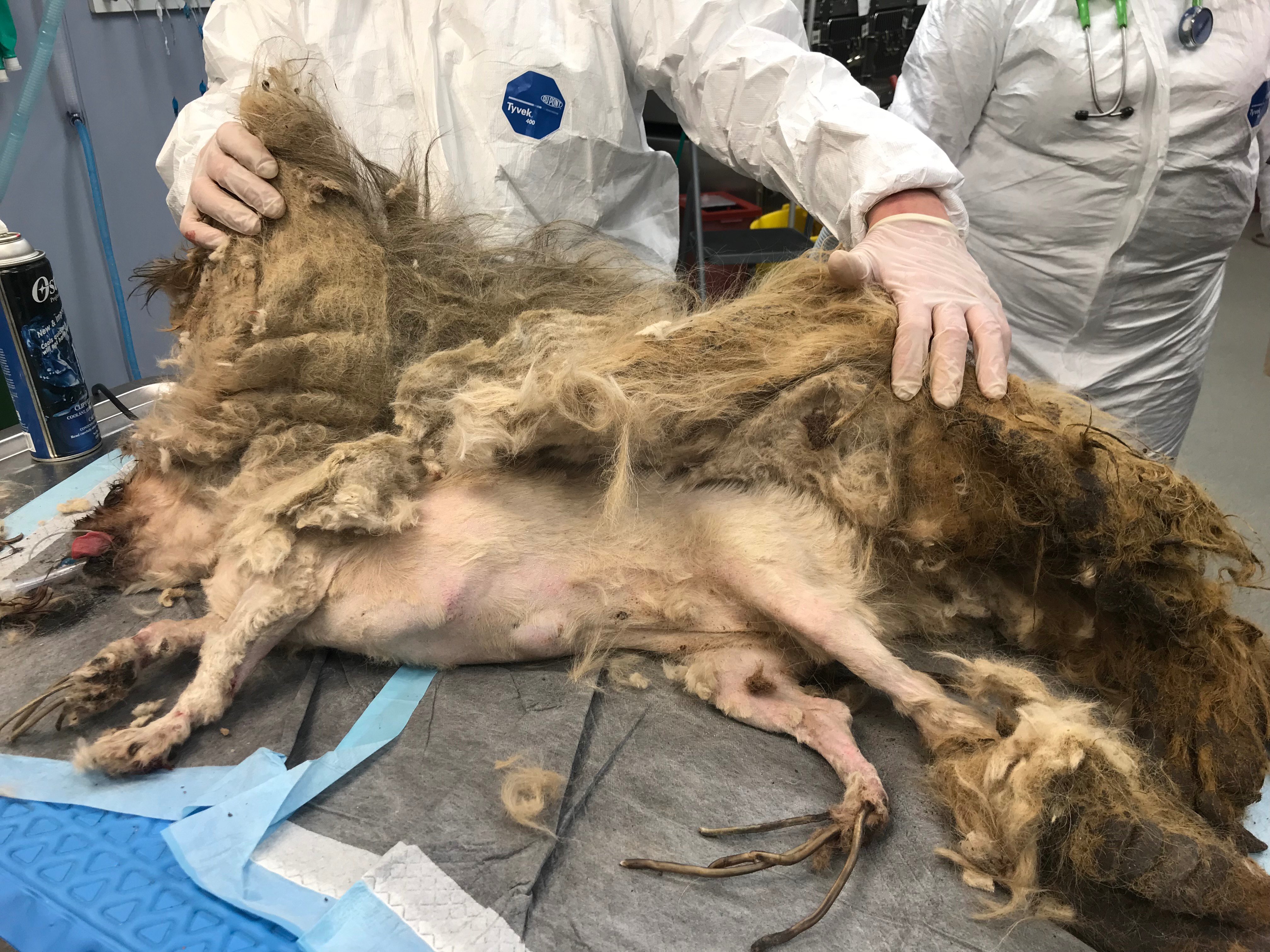 As the Humane Society’s vet, Dr. Amber Horn carefully cut away the nasty hair she expressed concern about the blood flow to Ellie’s legs. She’d had previous experience with a dog with fur matted so badly that they’d had to partially amputate the legs. Thankfully, Ellie’s legs still appeared pink and healthy.

Her toenails, however, looked like something out of a circus sideshow. Years without a trim had left them over 7-inches long and cocooned in hair, feces, and dirt. 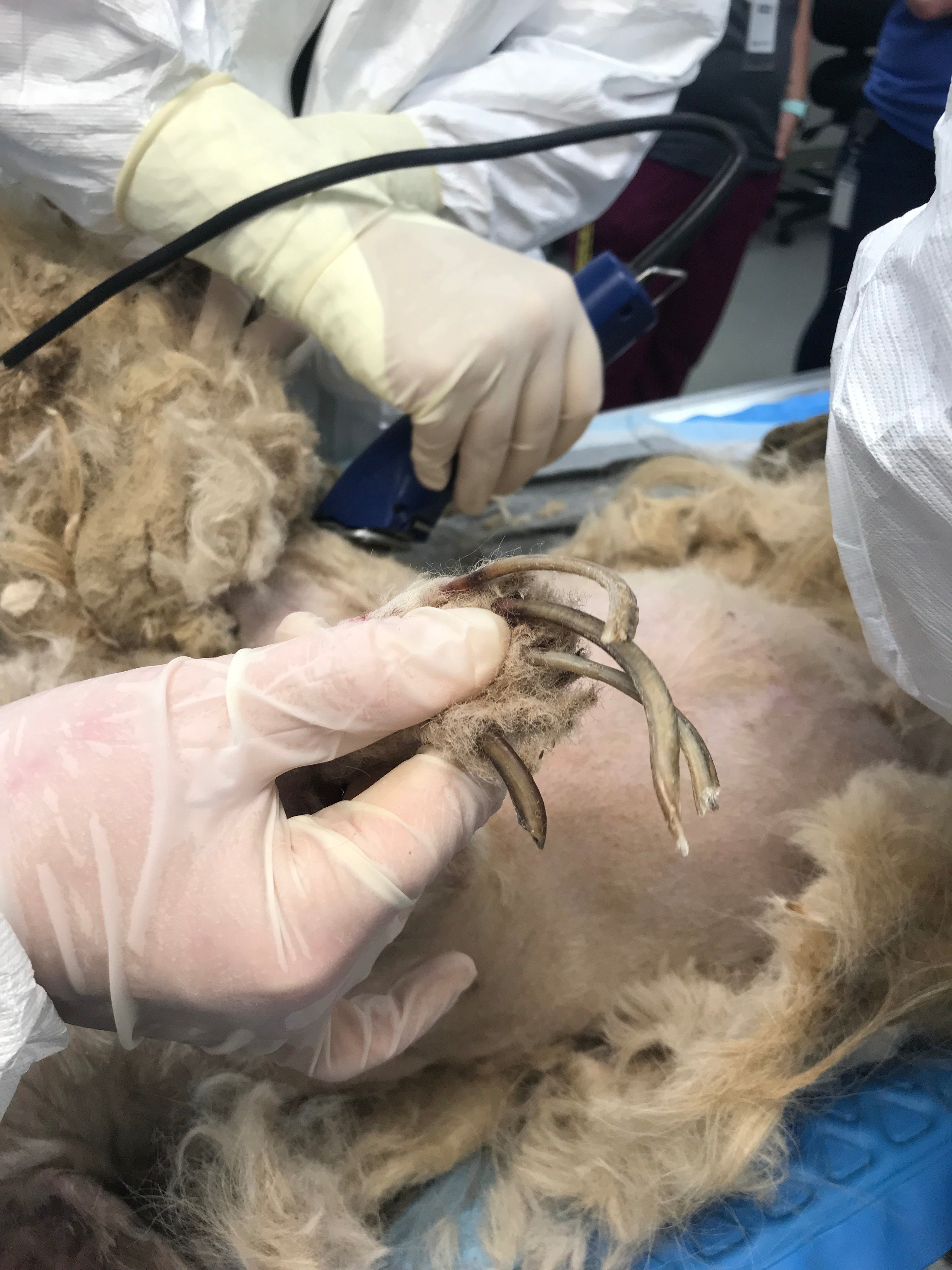 The veterinarian and her staff worked for more than an hour to remove Ellie’s overgrown pelt. They couldn’t believe when they’d finished and weighed the matted fur: 9 pounds all by itself! Poor little Ellie only weighed 11 pounds, so she was carrying around almost twice her body weight in dirty fur. 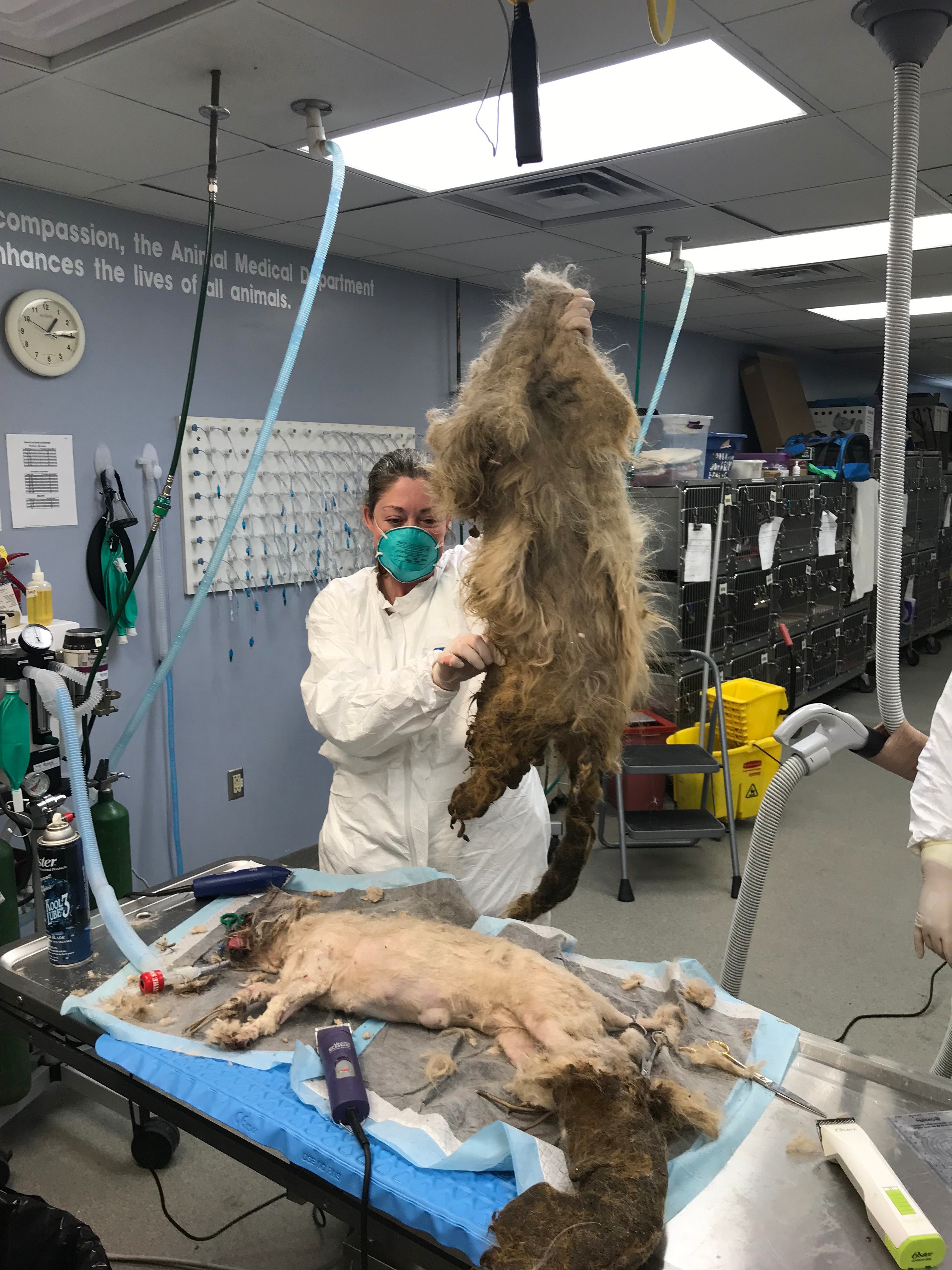 Once Ellie woke up from the anesthesia and began to recover the staff was thrilled to see some positive signs in the little dog. Although she was unsteady on her feet after years of not walking properly, she was still able to move around and even begin to show off her sweet temperament.

“After her clean up, we were amazed that she didn’t have more health issues,” said Pam. “The hard shell of hair apparently protected her skin from infections and parasites. We’ve seen cases where the hair gets so tight it actually strangles the limbs and naturally ‘amputates’ them. In those instances, necrosis and sepsis are very real concerns. In this case, after removing 9 pounds of hair from her 11-pound body, she was surprisingly healthy.” 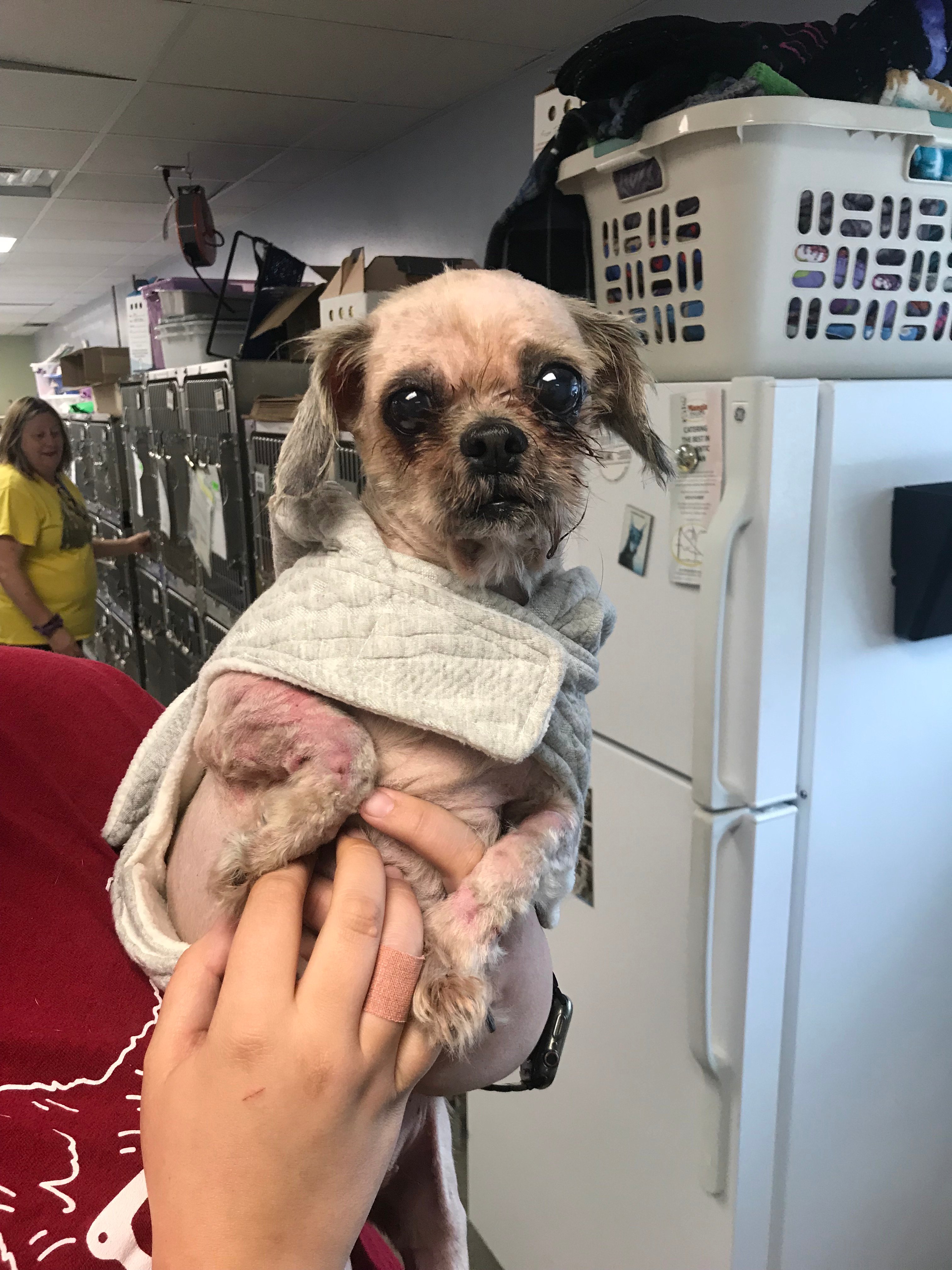 Two weeks after her rescue Ellie was stronger and so much happier. Thanks to the animal rescuers who saved her life, Ellie gets a second chance to be the clean, carefree companion she was meant to be!

According to the shelter, she “loves to explore and greets everyone with a sweet face and a happy demeanor. You wouldn’t know she was the same dog as before.” 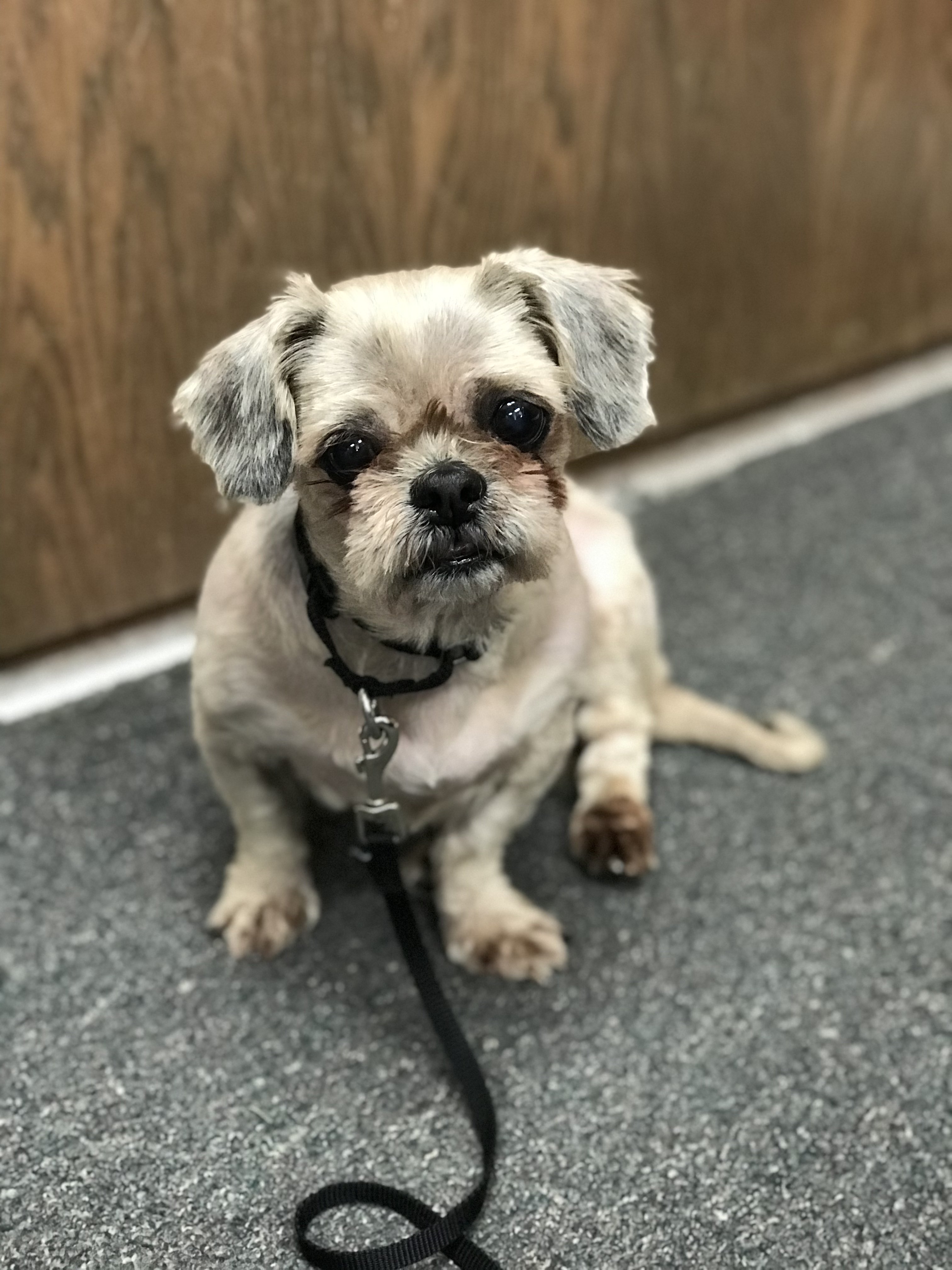 In a perfect world there would be no need for animal rescue workers like these, but in the real world we couldn’t be happier knowing that there are dedicated people out there who are willing to do this important work. Ellie Mae is living proof that rescue dogs still have so much love to give! All we have to do is clear away whatever’s holding them back and let their inner beauty shine.

Share this story to encourage your friends to adopt, don’t shop!