Magic tricks are delightful, especially when they appear on “The Ellen DeGeneres Show.” But they get even better when they make someone’s dream come true!

Ashley Carter of San Clemente, California has spent the last six months missing her deployed husband Steve. In her Marine’s absence, she’s held down the fort, caring for their two daughters while juggling school and preparing to give birth without having him there. 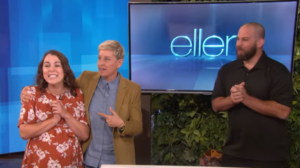 But not every moment of their time apart has been bad. In fact, Ashley recently attended one of Ellen’s shows — actually delaying her labor induction to be there!

We can only imagine how much more excited she became when Ellen chose her to assist Jon Dorenbos, an “America’s Got Talent” star, with a magic trick. After introducing herself, Ashley took a card from Jon’s playing deck and was stunned when he somehow merged her choice with Ellen’s. But his next trick was a million times better! 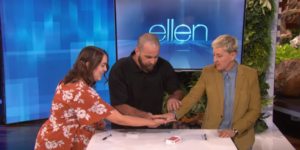 He directed everyone’s attention to a giant card waiting on the sidelines (which already had Ashley and Ellen’s combined card printed on the front). Then he explained the true source of enchantment:

The magic’s in Ellen ’cause she finds a way to bring us all together. We know your husband’s deployed, and we know that he’s gonna miss the birth of your child. But this is where Ellen can make the real magic happen! 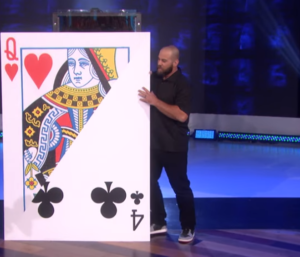 Once again, he instructed Ashely to look at the giant card. The image changed to a projection of neon dots in the shape of a human before fading away to reveal Steve! 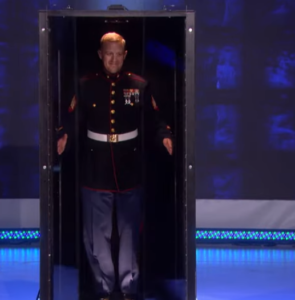 As soon as Ashley saw him, she started sobbing and rushed into his arms. Once everyone took a few calming breaths, Ellen told Jon, “That’s the best magic trick you’ve ever done.” 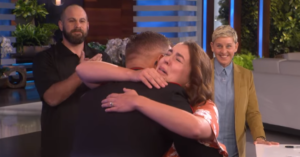 And the magical surprises didn’t stop there! A second huge card was brought out, and no one could have guessed what was on it.

As part of their One Million Acts of Good campaign, Cheerios partnered with Ellen to give the Carters $50,000!

Without a doubt, this is one of the sweetest (and most generous) magic tricks we’ve ever seen! Even if she’d known what was coming, Ashley couldn’t have asked for a better gift.

Watch Jon and Ellen make Ashley’s dream come true in the video below, and share this story to thank the service members who are sacrificing so much to serve others!