Alzheimer’s disease has robbed Kelly Ridings’ 90-year-old mother of her memories, emotions, and the ability to live on her own. But it hasn’t taken away one of her greatest loves: music.

It’s a passion she’s shared with her son since he was a little boy — long before she had trouble recognizing his face. Now, the Georgia man says it’s the one thing that helps them find each other again. That’s what inspired him to start recording their mother-son songs a couple of years ago. 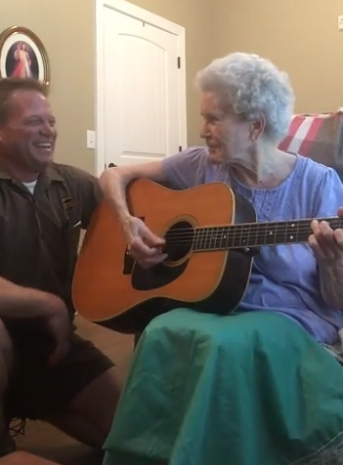 “Mom is 88 now. She’s in assisted living and has Alzheimer’s but she can still play and sing better than anyone in my eyes,” Kelly wrote alongside a video of the two in 2017. “Most days I miss her, but she always comes back to me when we sing.”

Indeed, the love between them is still very present as they sing “Poor Wayfaring Pilgrim” together in a video that has since been viewed by millions. Kelly’s mother plays the guitar beautifully, her fingers still familiar with the strings, while harmonizing with her son. And the experience is as magical as it is sweet. 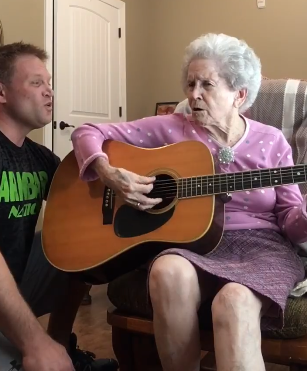 The lyrics come almost as easily as they did to her decades earlier — a rare comfort and familiarity in an everyday sea of confusion. 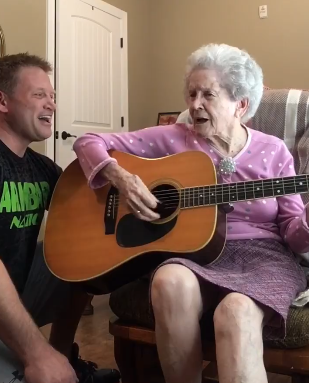 And to Kelly, it obviously means the world to still be able to share these treasured moments with his mother; to smile, laugh, and sing with the woman he’ll love forever — even if she can’t remember him much of the time. 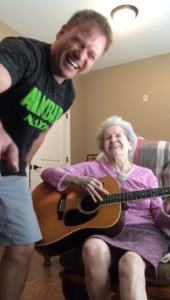 Despite living with a devastating disease, Kelly’s mom is lucky in one sense. She has an incredibly loving son who adores her. And Kelly knows how fortunate he is to have his mom as well, whose love always finds a way back to him through music.

Watch the mother-son duet in the video below, and share to bring a little joy into others’ days.