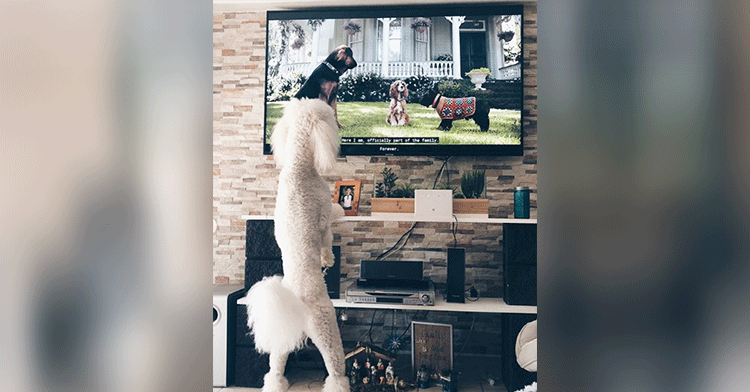 This Just In: Dogs Love “Lady And The Tramp” Jus...

Disney has a way of bringing families together.

There’s nothing as cozy as curling up on the couch with your loved ones and a good Disney film. Now that the new streaming service Disney+ has officially launched, more people than ever are tuning in for feel-good family flicks. As it turns out, the release of the new live-action version of “Lady and the Tramp” is quite a hit, and not just for humans. 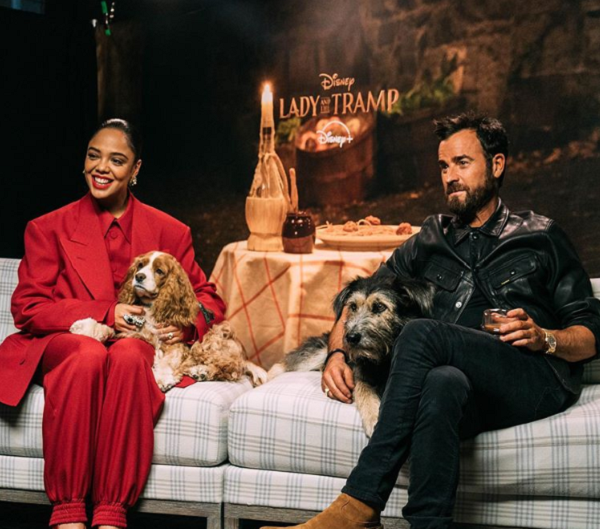 “Lady and the Tramp” is a retelling of the classic tale about a pair of dogs from different social classes who fall in love and have adventures together. The live-action version features all real-life rescue dogs voiced by celebrities like Justin Theroux (Tramp) and Tessa Thompson (Lady). The best part? All of the dogs who starred in the movie have been adopted and are no longer homeless.

At the film’s premiere, star Justin Theroux brought along his own rescue dog Kuma as a date, live-blogging the entire thing. Kuma gave the entire movie an enthusiastic two paws up, and now other dogs are watching it and seem to be just as enthralled as she was! 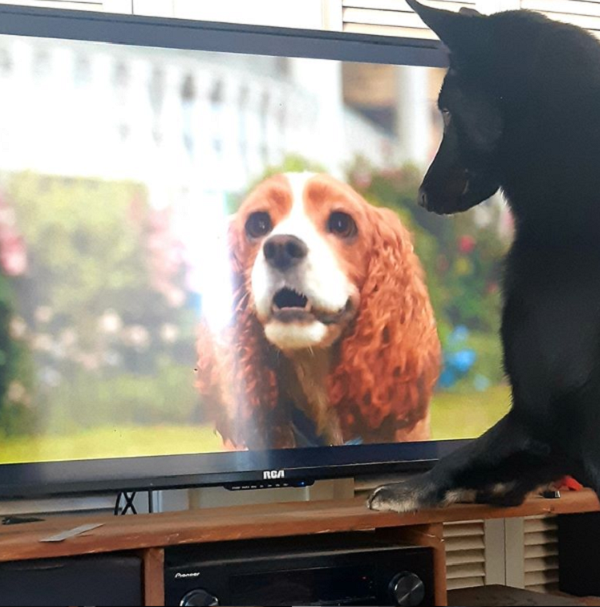 “I think it’s safe to say Baloo is loving the new lady & the tramp movie as much as i am!!” wrote one Instagram user, sharing a picture of their dog avidly watching the movie at home. “Enjoying a little Lady & the Tramp this chilly Sunday morning!” wrote another. 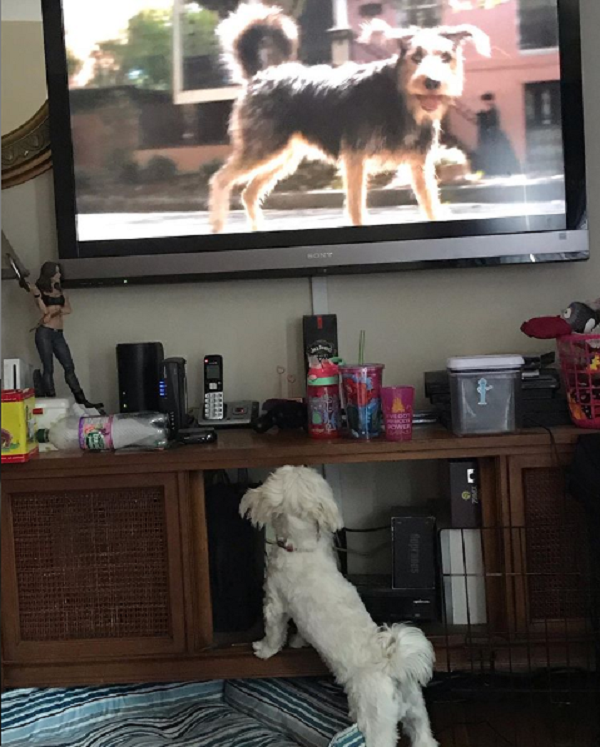 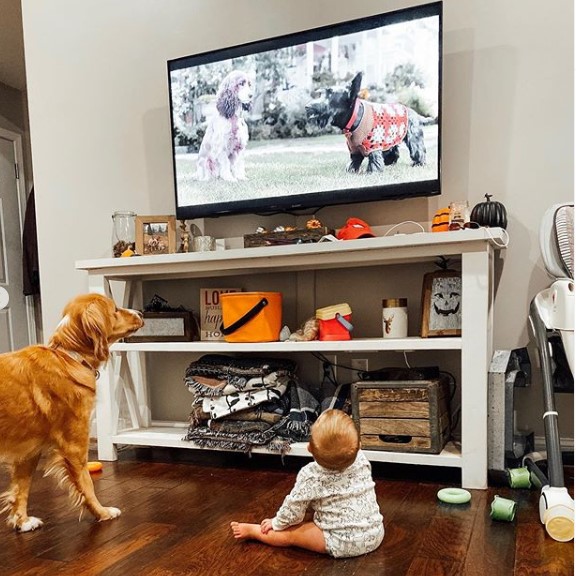 Just days after Disney+ launched, people started sharing videos and pictures of their dogs watching the movie on YouTube, Instagram, and Twitter. No matter the size, shape, or breed of dog, they all seemed positively glued to the screen. Many dogs simply stared in awe, no doubt wowed by these famous dogs who’ve made it big on the silver screen. Others were so excited that they ran around barking their heads off.

The verdict is in: dogs love “Lady and the Tramp” just as much as we do! They’re probably so happy to see a story starring dogs just like themselves, especially knowing there’s always a happily-ever-after in store for these beloved characters. Now, if you’ll excuse us… we’ve got a movie to watch with our dogs!

Watch one more dog who’s loving the new movie in the video below, and don’t forget to share.

My husband and I’s movie night turned into our rescue dog’s movie night. Bruno watched Lady And The Tramp too… like legit watched it. 🐶📽🍿😭 pic.twitter.com/fYpXgdkFxD

Back To The Wilderness Or Stay With Her Rescuer? This Baby Squirrel Made Her Choice!

When Paul was a child, he and his father rescued a baby squirrel named Suzy. The two bonded over their love of the animal, and it was an experience the...

Cats and dogs make great pets, but lizards are often overlooked when it comes to companion animals. No, they're not furry, and no, they don't necessarily like to cuddle. Plus,...

15 Adorable Critters Who Are Truly Otter This World

In case you haven't seen any pictures of otters lately, here's a reminder: They're adorable! There are 13 different types of otters in the world, and their appearances range from...

We love dogs for so many reasons. They're super cute, obviously, and they're the most loyal companions. While both describe this sweet beagle-basset hound mix, that's not the reason why he's capturing...

Man Plants Trees In The Same Spot Every Day — Decades Later, The Result Is Stunning.

"I will continue to plant until my last breath." Since 1979, Jadav Payeng has single handily planted a forest bigger than Central Park. The dedicated arborist managed to turn an...

This 12-year-old just had the birthday of a lifetime, all thanks to a country superstar! Bo Fenderson and his friend, Tanner, are from Bangor, Maine. Both of them are massive...

We love dogs for so many reasons. They're super cute, obviously, and they're the most loyal companions. While both describe this sweet beagle-basset hound mix, that's not the reason why he's capturing...

It can be really hard to be a single parent. For one thing, all the responsibilities of raising a child can be overwhelming for just one person. There's the time required,...

15 Adorable Critters Who Are Truly Otter This World

In case you haven't seen any pictures of otters lately, here's a reminder: They're adorable! There are 13 different types of otters in the world, and their appearances range from...

Eric Thomas, also known as "ET," is a critically acclaimed author, world-renowned speaker, educator, pastor, and an Audible Audie Awards Finalist. Though his success is plentiful now, this man has overcome...

The Day Your Daughter Died, This Is What Really Happened.

Nursing is one of the most physically demanding jobs out there. Everyone knows about the long hours and years of school required... but what about the emotional demands of the...

Tiny Fan Jams To Bruno Mars And Her Adorable Reaction Has The Internet In Stitches.

The song "Uptown Funk" is making a comeback. That's right, you heard it here first. The summer's hit song may not grace the airwaves like it used to, but people...

Some instincts are far too strong to ignore. Fourteen-year-old Walker Cousineau of Bentley, Michigan started losing his hearing when he was about 10. Since then, he's constantly learning to navigate...

“So Stinkin’ Cute!” Cop Scoops Up Orphaned Baby Skunks And Reunites Them With Family.

Skunks sometimes get a bad rap, but they're actually beneficial predators who eat pests like grubs and rodents. Plus, if you've ever seen a baby skunk, or kit, you know...

Talented Busker Gets Interrupted In The Middle Of Performance — For The Best Reason!

Music has a way of speaking to us in ways we can't even understand. Even though Shanilee Tordilla Eleria was the one performing, she found herself being moved by an...

By the time you're a senior in high school, you've had enough "serious student" time. Now, it's time to party! At North Farmington High School in Michigan, seniors are allowed...

The only thing Keanu Reeves is known for more than his stellar acting skills and his iconic role in "The Matrix" is the way he genuinely cares for others. There...

Just like millions of other kids around the globe, Megan Piphus Peace grew up watching Sesame Street. But for Megan, it isn't just a show that marked her childhood —...

8-Yr-Old Sneaks Book He Wrote Into Library — Now 100s Are Lined Up To Read It!

Sometimes when you want something, you just have to go out there and get it for yourself! That was the mindset of 8-year-old Dillon Helbig of Boise, Idaho during the...