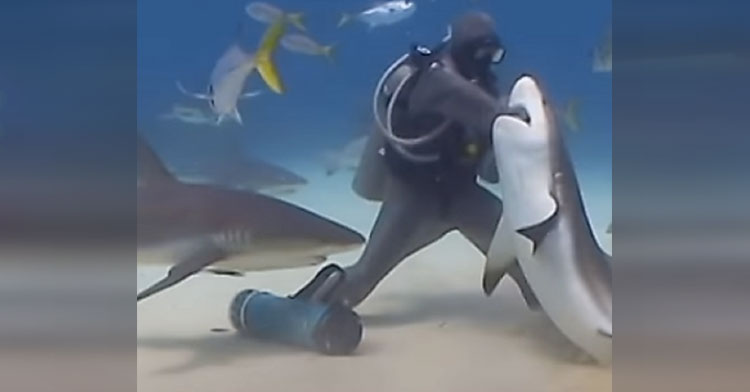 If you think it’s hard getting a sesame seed that’s stuck between your teeth, try pulling a massive fishing hook out of a shark in its natural habitat.

And that’s why they call Cristina Zenato the “shark whisperer.” She has spent years, as a resident of the Bahamas, helping out her “neighbors”. 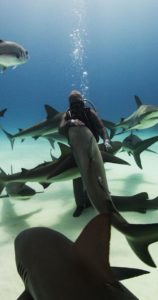 The Italian born dive operation manager and scuba instructor is world-renown for her ability to lull her Caribbean reef sharks into an almost catatonic state. This technique allows her to remove the large fishing hooks that become deeply embedded in the sharks’ jawlines.

Cristina fell in love with scuba diving during a trip to the Bahamas more than 20 years ago, and eventually moved there permanently to pursue her passion of diving with sharks. They eventually became so acclimated to her presence that she started naming them, including her first “patient,” a female shark named Foggy Eye.

She initially hated to be touched, Cristina says, but for some reason allowed her to remove the deeply embedded (and unquestionably painful) fishing hook. After that first extraction, other sharks started approaching her with their own “dental problems.”

“I do believe they communicate and they (say), ‘Psst, shark dentist is in,’” she says in the video below. 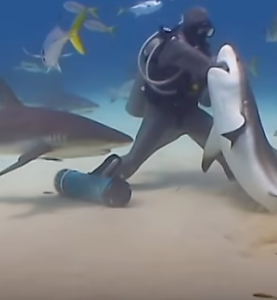 Caribbean reef sharks aren’t considered dangerous to humans unless provoked, but still, Cristina errs on the side of caution and wears a protective suit made of chain, just in case. Look at the size of those hooks! Imagine trying to get through your days, weeks, even months with a construction nail entrenched in your jaw… 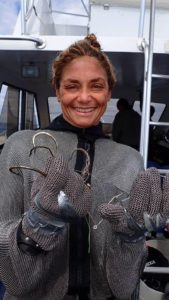 Over the last 15 years, she’s removed an estimated 250 hooks without receiving a single bite, although her fingers have been injured on occasion “from twisting and turning of the animals trying to become free as I tug on the hook. Not to mention the hooks themselves sometimes piercing my skin.”

Sharks, she emphasizes, aren’t monsters, but rather “living, feeling creatures.” 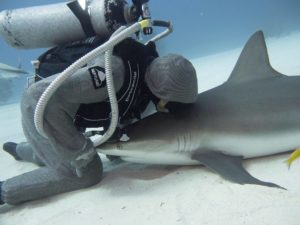 There’s no shark-infested waters. The waters belong to them and we need sharks in the waters. These are the ambassadors and they are my sharks and I will take care of them as much as I can.

If it weren’t for Cristina, these poor sharks would probably be swimming around with those hooks in their mouths for the rest of their lives, and that can’t be comfortable, especially when they’re trying to chow down on something that’s actually supposed to go in their mouths. Watch this amazing underwater dentist perform an extraction in the video below, and share to spread thanks for all the work she does!