There are times in life when we must swallow our pride and ask for help.

Denga Mudau of Johannesburg, South Africa recently took to her Twitter page to do just that. Denga and her friend Aphiwe were due to graduate from the University of the Witwatersrand. The pals were excited to celebrate their accomplishment, but there was just one little snag in their plans. Aphiwe could not afford a nice outfit to wear to his graduation ceremony. 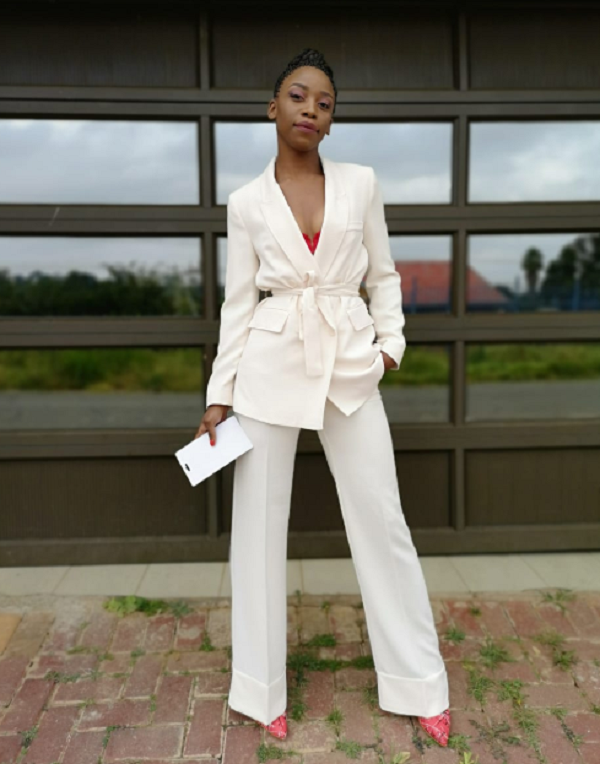 South Africa is a poor nation, and as a hard working student herself Denga could not afford to help her friend the way she would have liked. Instead, she decided to ask her small Twitter following to donate a few articles of clothing so that Aphiwe could look and feel wonderful on his special day. 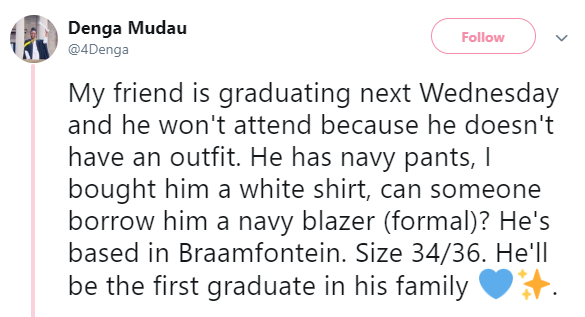 Denga had already done what she could to help her friend by secretly buying him a new shirt, but she wasn’t too proud to reach out to the internet to ask for help completing his outfit.

“He doesn’t know I got him a shirt, I just wanted to surprise him as he’s been a good friend, he helped me through my depression, even when he was going through the most,” she admitted.” She later confirmed that during their college days Aphiwe had always been there for her, staying on the phone with her for hours as she struggled with the stress of her studies. 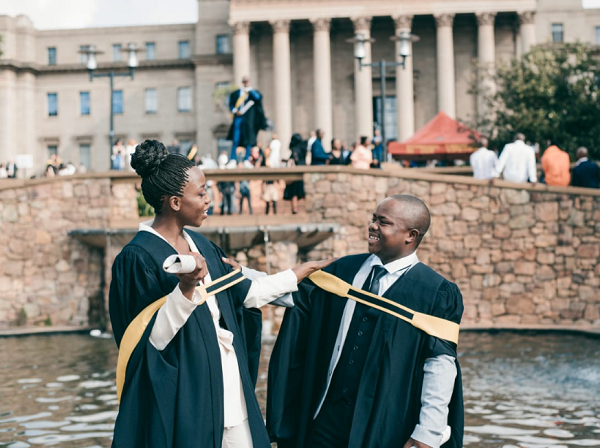 “I remember how he would wake up at night to help me with an anxiety attack over the phone,” she described. “I wouldn’t have written finals if he didn’t fetch me from res every morning and help me revise. Truly appreciate him.”

Denga probably hoped that a few people she knew would step up to buy or lend her friend a jacket, but what happened was something even more beautiful and life affirming. Strangers from all over the world somehow saw Denga’s plea and opened their hearts to her story. Soon she began receiving offers for everything that could make a graduation day memorable, from clothing to cash and everything in between. 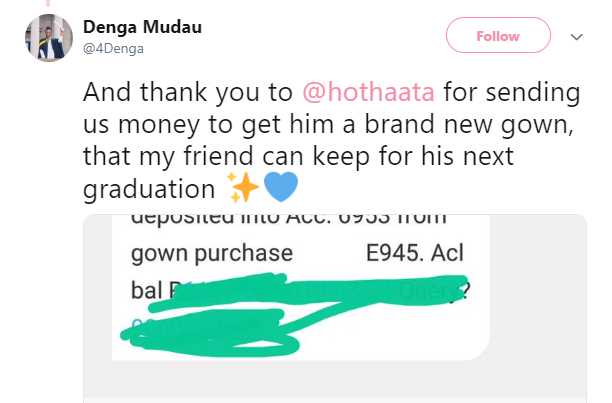 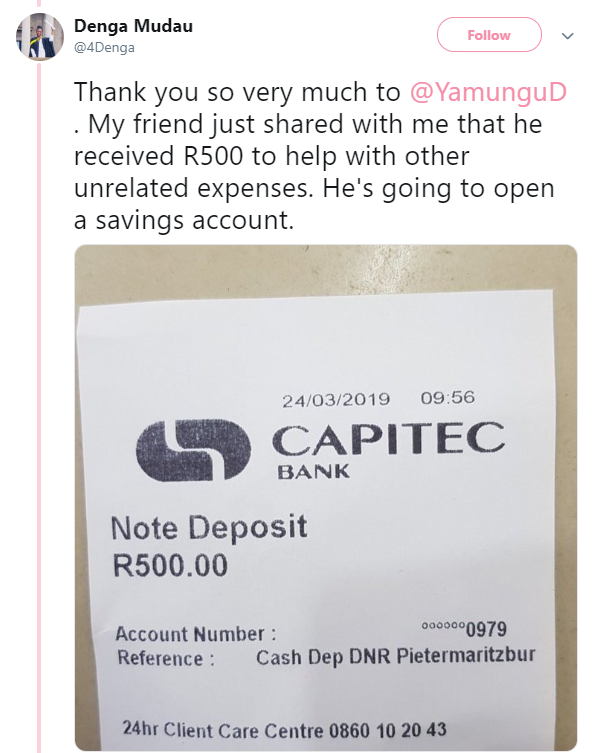 Just hours later Denga had gathered a full outfit for Aphiwe, money for his cap and gown, money for his savings account, a photographer to shoot their graduation day, and offers to buy restaurant meals for their entire family! On the big day they were treated to both lunch and dinner by new friends who’d stepped up after seeing the post online.

“He had my back when I had given up on life, he deserves all the blessings coming his way,” Denga said. 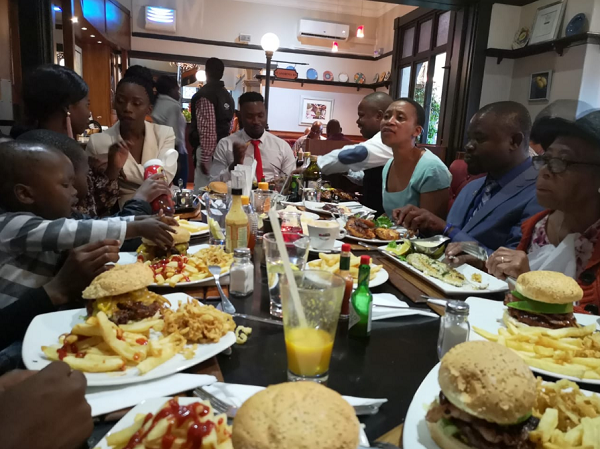 Aphiwe and Denga were both overjoyed by the kindness these strangers offered up. Not only were they heartened by the generosity, but they also were able to enjoy their day without worrying over money, for a change! Denga says that her friend is worth every bit of the effort she put in; she was merely repaying him for the kindness he has always extended towards her. 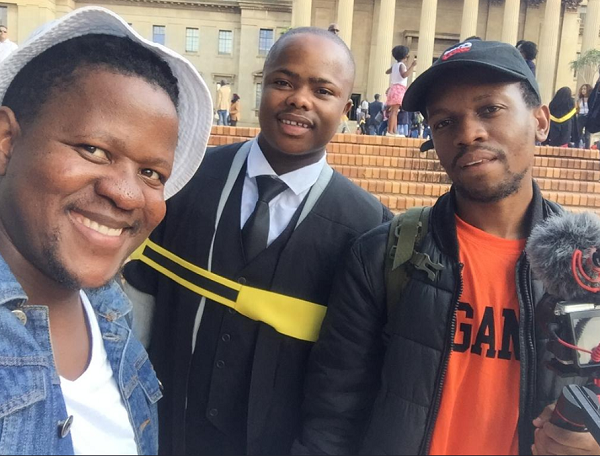 “More than anything, I’m grateful for the blessing that is Aphiwe, he has become a big brother, a mentor, a confidante, council and prayer partner. He really is an all-rounder; we can go from talking about God, to academics, to family life and how best to face life’s challenges!!” 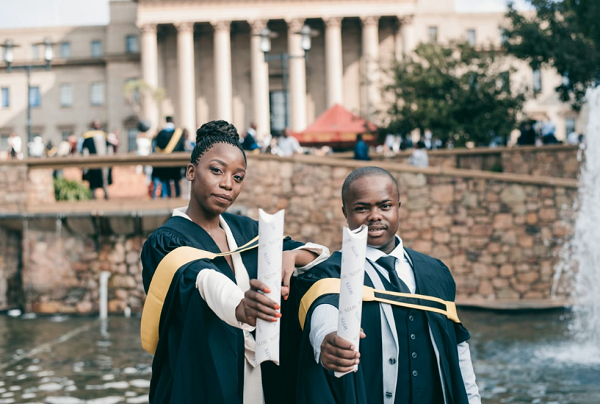 It’s not always easy to ask for help, but this story is a reminder that giving others a chance to do good deeds is a blessing for everyone. They get to feel good for helping others, and we get a first-hand glimpse of the global community of humanity that nurtures and sustains us.

Please share this story to encourage more kind deeds in the world.