The single mom struggled with health problems for most of his life, and by the time Stan was in his late teens she required dialysis three times each day just to stay alive. Naturally Stan went to get tested to see if he was a match for kidney donation; that’s when he learned that he too suffered from the hereditary disease. 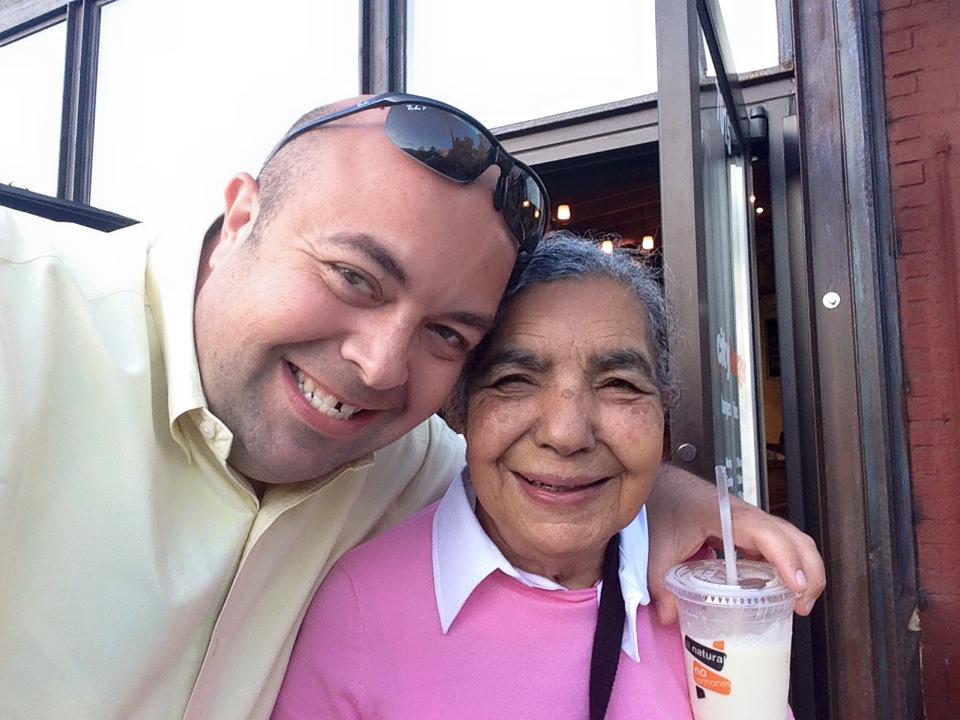 Now 41, Stan’s disease and some other health problems forced him to retire from the Middletown, Maryland police force. His kidneys have gotten so bad that doctors tell him he too needs a kidney transplant. The father of three first turned to family members including his wife, only to find they weren’t a match. That’s when he decided to go to social media to try to find a donor.

“Over the past few years my function had started to decline, as my kidneys were getting bigger with the cysts covering it,” Stan wrote. “In the past year, I went from 25% function to 13% and that is when my wife Jessica told me I needed to put an all-call out. I own a thriving real estate company and have three young boys ages 5, 4 and 3 – I didn’t need anything to slow me or my progress in life down. My wife made a statement that sits with me today. ‘If you’re not here with us 3 months from now, it doesn’t matter how successful you are in your business.’” 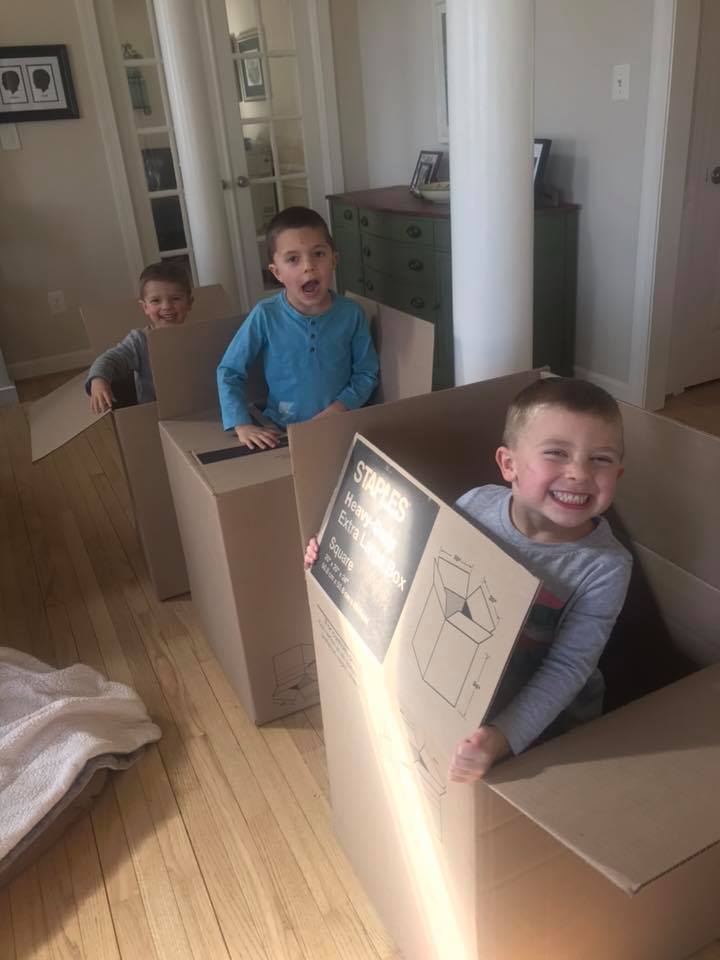 Stan put out a plea for help on Facebook, hoping against hope that someone on his friend list would volunteer to get tested and turn out to be the life-saving organ donor he needed. He was astounded when 31 people stepped up to get tested, one of whom was his former partner on the police force, Megan Ambrose. 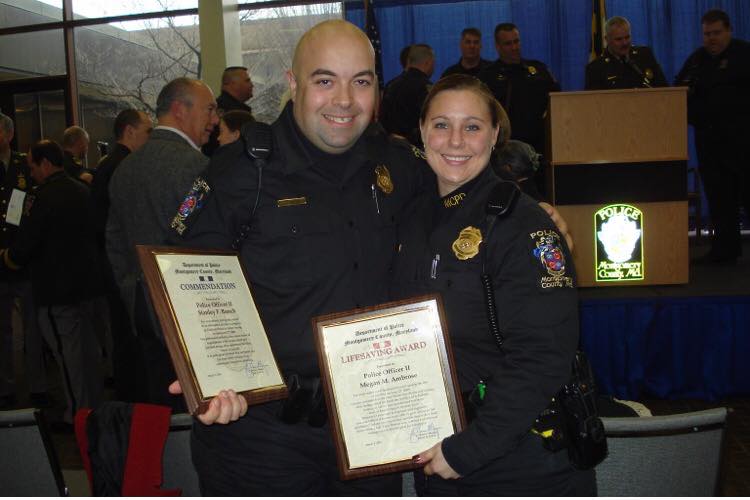 Stan and Megan have known each other since 2007, and in the years they spent on the force they forged a tight bond. Each day they put their lives on the line together knowing that they had each other’s backs. When Megan was involved in a serious motor vehicle accident on the job, it was Stan who rode with her and held her hand as she was air-lifted to the hospital.

Megan says that the moment she saw Stan’s post on Facebook, she knew she would get tested. It wasn’t even a question for her “ride or die” former partner. “I didn’t even think twice about it,” Megan said firmly. She went to Georgetown University for testing in January and quickly discovered that she is a perfect match — the kind of match usually only found in siblings. 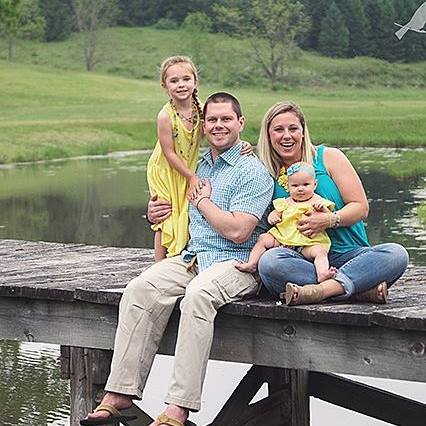 “They told me they wanted to transplant my left kidney,” she explained. “I couldn’t believe it. This is the way it’s supposed to be. He is family and he needs help and if I’m able to help him I’m going to do it.”

Rather than tell Stan the good news right away, Megan decided to make the occasion even more special by calling their families together for the announcement. “I got construction paper from my kids and started writing the letter,” Megan said of the now-viral note.

“At the end of January or early February Megan asked if my wife Jessica and I could come down and meet with her and her husband Chris,” Stan said. “Megan has two young girls, and we have three young boys so scheduling was tough. It turned out that Valentine’s Day worked for all of us, which ironically happened to be National Donor Day.” 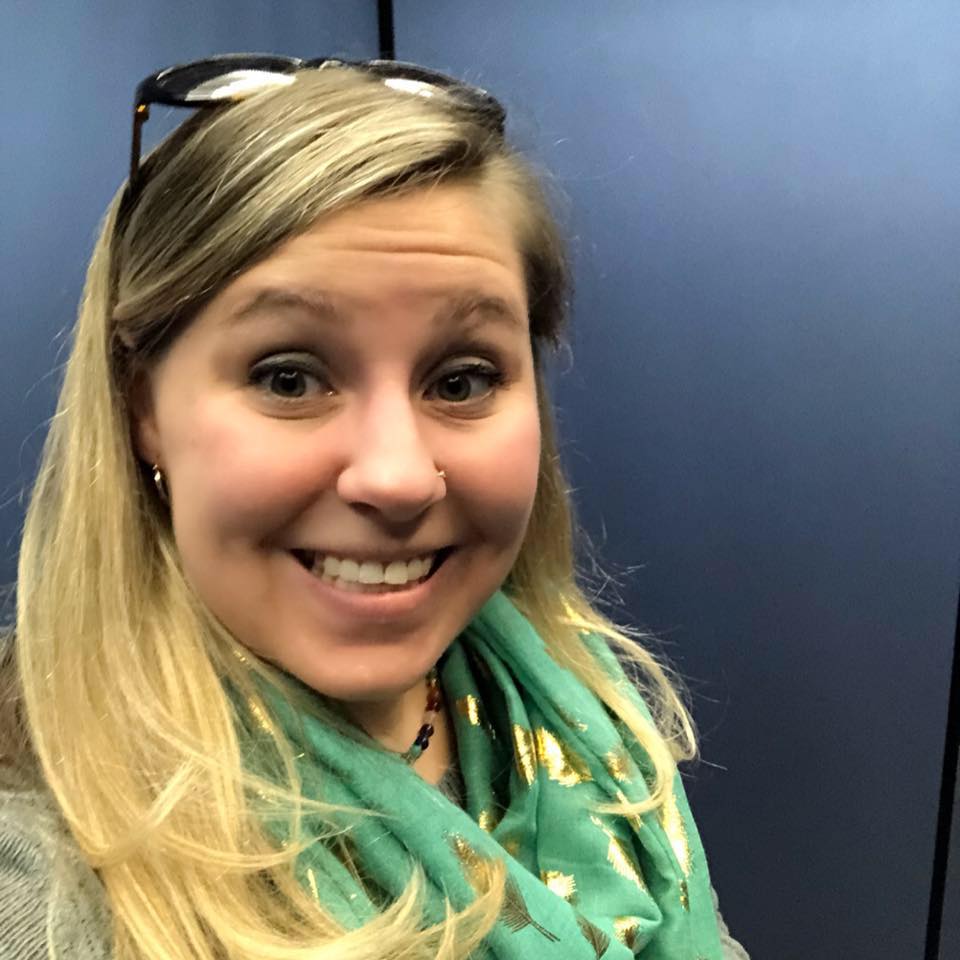 “The entire drive down to Megan’s house, we were rehashing what if’s. What if Megan got cold feet, what if Megan is being disqualified, what if she couldn’t or was unable or unwilling to do it, what if, what if what if.”

Stan needn’t have worried, because about a half hour into their meeting Megan wordlessly handed him a handmade card. Megan’s husband recorded video of the moment when Stan read the note and realized that his former partner was about to make his dream come true. 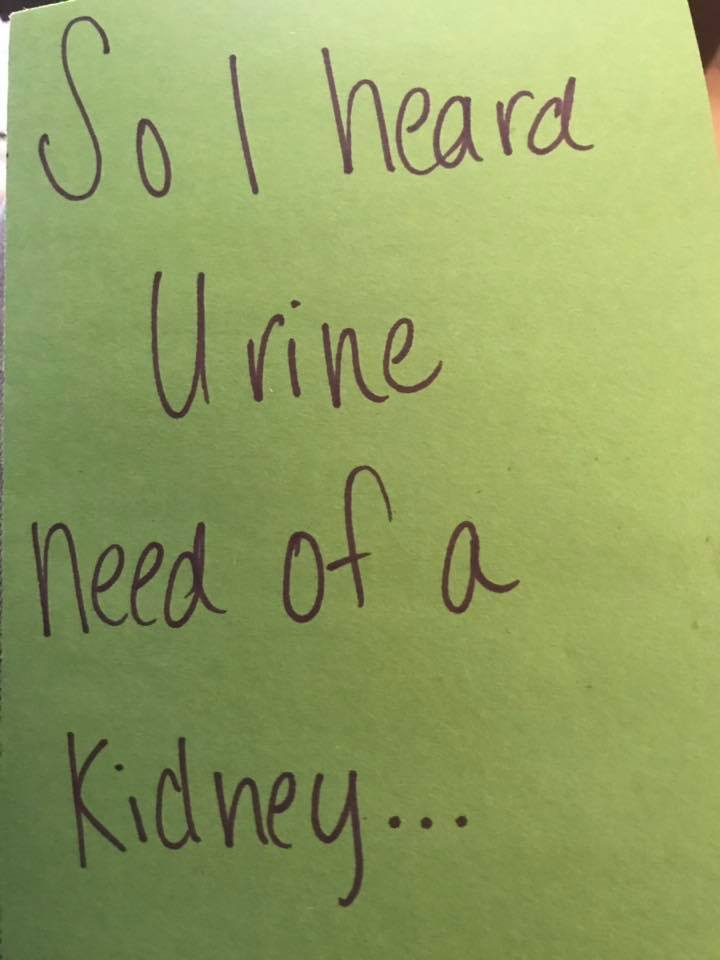 “So I heard urine need of a kidney,” Megan had written. “Want mine? Turns out that we are a perfect match… Not only on the job but in blood and organs too. You always had my back on the road and off. Now you can have my kidney.”

Stan instantly burst into tears of joy and relief, and he wasn’t the only one who got emotional. Megan was right there with him, jumping up to wrap him in a huge hug.

“You can’t come up with a word for someone who is that selfless that they’d give up a part of their body,” said Stan. “At this moment it was WOW, and the WOW was caught exactly how I still feel about it. I mean WOW someone wants to give me THEIR kidney?” 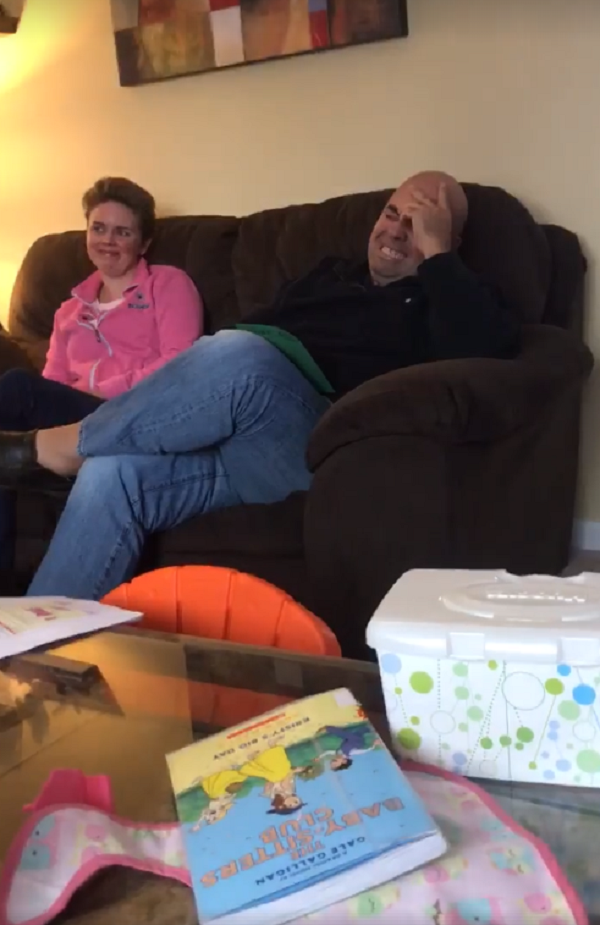 “Seriously the tears of joy, relief, happiness, just everything… the stress of the search, the stress of the unknown just all left my mind at that moment and I was overcome with the love of this PRICELESS gift.”

Stan and Megan will underwent the transplant surgery on May 14th at Georgetown University Hospital in Washington, D.C. They decided to share their story and the intimate video as a way to raise awareness for PKD and the kidney donation process. 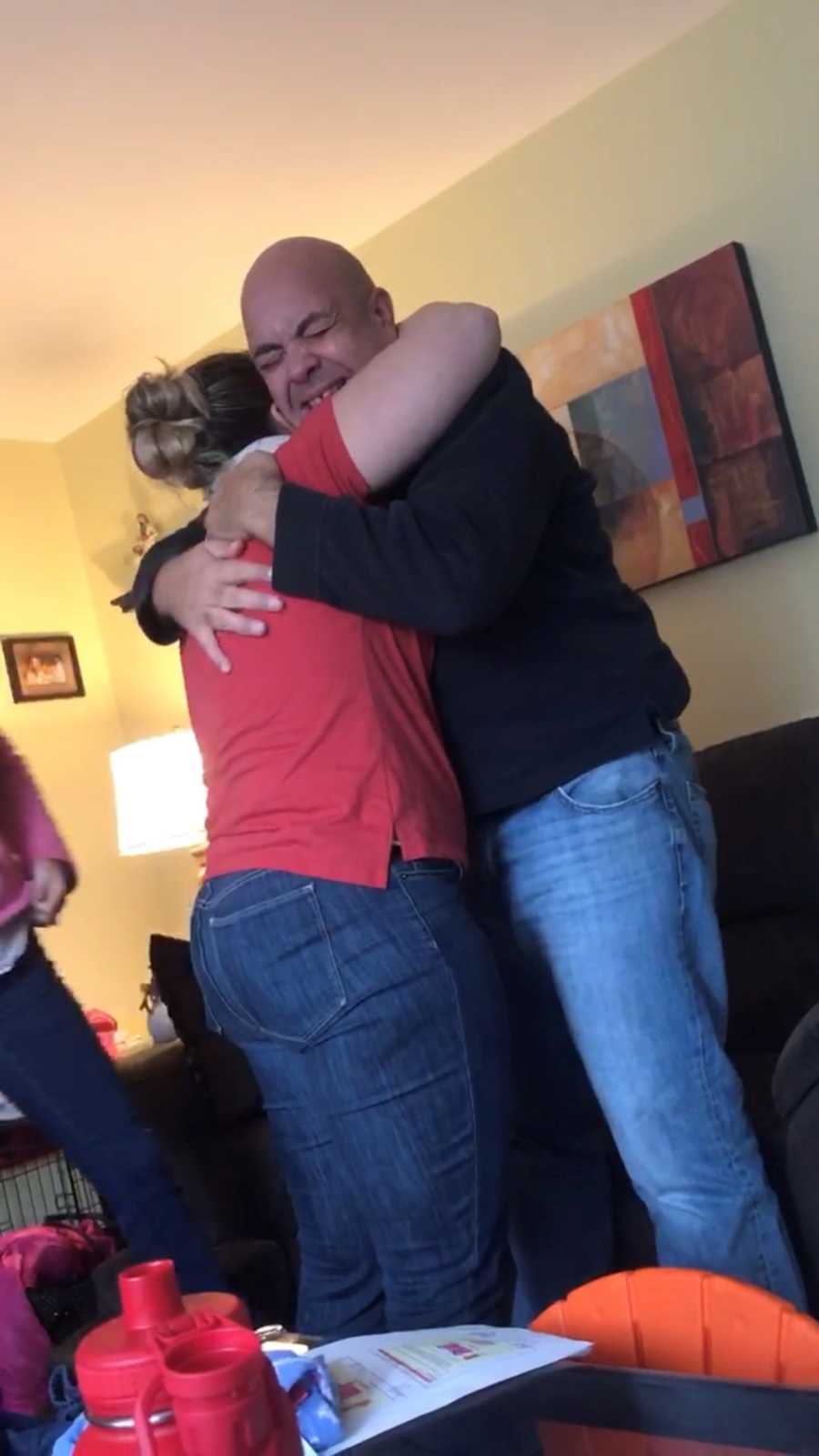 “Thank you for the gift of life Megan, I love you, I love your family, and my family and I are forever indebted to yours.”

This is one bond that will become even tighter once they’re joined together by blood. With Megan’s selfless donation they’ve moved beyond work partners or even mere friends; they’re family.

Watch Stan and Megan’s emotional video below, and be sure to share to raise awareness of this devastating illness.