Sure, any average Joe can stand there waving a little flag and directing traffic. But what’s the fun in always doing things by the book?

Quitta Williams of Niagra Falls, New York, and everyone else who witnessed this spectacle at a construction site a couple months ago couldn’t help but get a kick out of it. And we suspect that’s exactly the reaction this construction worker was aiming for when he busted a series of slick moves while directing traffic at a detour. 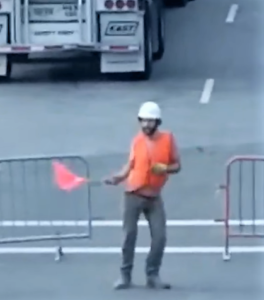 “You seen it here 1st…Niagara Falls finest directing traffic…?????? Ain’t nothing wrong with loving your job! I’m taking you viral!!” she wrote in a Facebook post to the man, who was later identified as Sebastiano Spurio.

Depending on how long his shift lasted (and his legs), this dancing dynamo potentially brightened the day for thousands of commuters, as well as millions of people who’ve viewed the video online in the months since it was taken. People directing traffic often disappear into the background, even when they’re waving flags and dressed head to toe in bright orange.

But you’d have to make a conscious effort to miss this guy.

We don’t know about you but if every construction worker in charge of redirecting cars was this jazzed about his job, we’d be way more excited to get caught in traffic! If you’re on the job anyway, may as well have some fun with it and put smiles on random strangers’ faces while you’re at it, right? 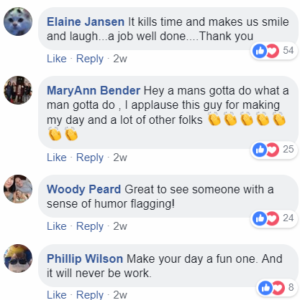 Sebastiano wrote back to his fans with a heartfelt response:

As a man who fights for his mental health every day it is surreal to see my silly way of helping a few strangers smile and imagine those happy moments ripple throughout the city and world is what I truly believe this reality is all about.

Watch the rest of this joyful performance in the video below, and share to make someone smile!

You seen it here 1st…Niagara Falls finest directing traffic…??????Ain't nothing wrong with loving your job! I'm taking you viral!! #TalmboutHappyFriday??#IAmHollering