People get into bodybuilding for any number of reasons, whether it’s achieving a personal goal or be the envy of all the other gym rats. But Steve Alexy got into it to push limits, limits that seemed to have been pretty well set before he was even born.

Doctors diagnosed him with cerebral palsy at birth and cautioned his parents that he probably would never even be able to walk. They encouraged them to look into a long-term care facility, but they refused, and instead encouraged their son to live as independently as possible. Against all odds, he went to school and work, driving and living just like any able-bodied person.

Then, in 2011, Steve started working out at a gym in Suffolk, Virginia, in an effort to improve his strength and coordination. Above, he’s doing a lower-body workout with a focus on his quads, while down below, he’s working to increase muscle mass in his biceps. (As a (former) years-long gym rat myself, I can attest to how incredibly difficult it is to do just one more set!) 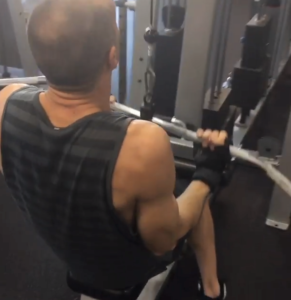 His personal trainer, Chris Lovelette, didn’t know much about cerebral palsy, or how the condition would affect his client’s ability to power through hours of cardio and strength conditioning. But together, they worked out a routine that Steve stuck with, and three years into it, Chris was encouraging his protégé to start competing. 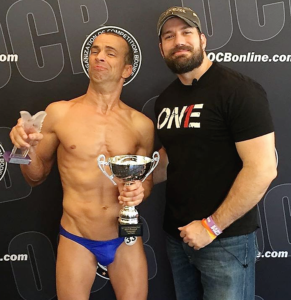 Being able to go on there and just do the poses and go through the routine knowing that maybe he can’t do it as good as everybody else and yes, he’s not going to look as pretty as everybody else, but he’s going to go out there, give 100% and do his best.

Fellow bodybuilder Suzi Newman recorded one of his competitions in the fall of 2016, and it quickly went viral with its quiet, unspoken message: Your only boundaries are the ones you set for yourself, and accept.

Look at how many trophies this man has on his mantle now! 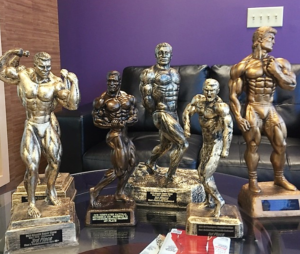 A man in his 40s taking up bodybuilding for the first time in his life? A woman who suffers constant seizures during her marathons, but just dusts herself off and keeps on running? These are the kind of role models we all need in our lives, the ones who inspire us to move past whatever boundaries (real or imagined) we’ve set for ourselves and truly seize the day.

Watch the video below to hear more about this gutsy man’s journey, and remember to share this story with anyone you know who needs some encouragement to achieve their own goals!