We never get tired of bringing you stories about parents returning home after a long deployment and surprising their kids. Some of those surprises are planned and coordinated with almost military-like precision, while others are more or less straight forward. But however they decide to pop onto the scene, the reactions on the children’s faces – especially the little ones – are truly priceless!

In the video below, young father Cameron Yancey stands outside the doorway, his gaze shifting nervously between the camera and the door. Cameron is in the Air Force and had been deployed in the Middle East for seven months. His son had no idea he was home. 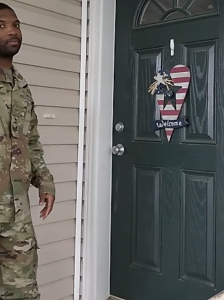 Then he hears the doorknob turn and crouches down, so he’ll be eye level with the little man who’s about to swing it open and get the surprise of his life. Cameron’s son, 5-year-old Cade, is still and quiet at first. There’s no way he saw this surprise coming… 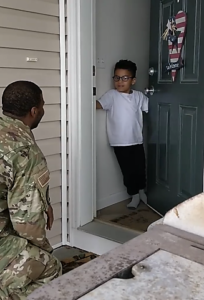 But the confusion doesn’t last for long, and this adorable little tyke takes a running leap and jumps straight into his old man’s arms!

“Daddy!” he cries, then turns over his shoulder to yell into the house. “Mommy, Daddy! My daddy’s home!”

Mom comes to the door, but respectfully stands back, allowing Cade to have this uninterrupted moment with his dad. Cameron wraps the little boy up in his strong arms and holds on as if he’ll never let go, turning in small circles as Cade cries out over and over again, “I missed you, I missed you, daddy, I missed you!” 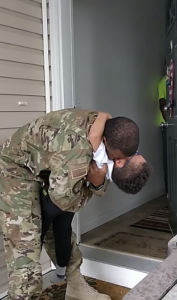 Cameron posted the video on Facebook where it has quickly gone viral.

Watch this sweet reunion in the video below, and share if it touched your heart as much as everyone else’s!

Surprising the kid. Back in Alaska. He didn't know I was coming home.