Doctors Predicted Baby Would Have “A Bit Of Hair,̶...

One of the best parts of a pregnancy for parents is getting to see the baby on the ultrasound. Every visit just gets better and better. As the weeks go by, the baby grows from a tiny little thing into an active baby who is ready to come into the world.

When Natasha Gent and her husband Ashley went to their 20-week ultrasound appointment the technician saw wisps of hair around their daughter’s head and predicted that she would be born with “a bit of hair.”

But no one could have truly guessed just how close this prediction would be. Since day one of Holly’s life she has been blessed with her voluminous long locks and it is showing no sign of slowing down anytime soon. Now, at the age of four months Holly has thick brown hair that has grown past her shoulders.

While most babies her age are just beginning to have hair that is reaching their ears, Holly has grown hair that even her mother is jealous of.

“It doesn’t feel like baby hair, it’s not fine or fluffy at all, it is beautiful and thick,” Natasha told the Telegraph. “Sometimes I get serious hair envy.” 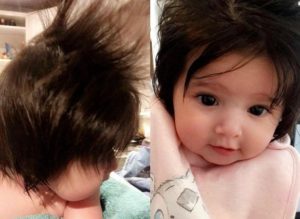 Luckily for both Ashley and Natasha, cleaning and taking care of Holly’s hair has been easy to do. According to Natasha, she loves bath time and having her hair blow dried.

Natasha believes that it’s almost time for Holly’s first haircut appointment but doesn’t think that Holly’s dad Ashley is ready for it, yet.

“We’re both fans of long hair but he is definitely more attached to it than me,” Natasha told Daily Mail. “It’s just so beautiful.” 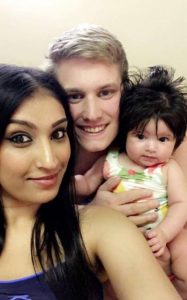 Holly is a special little girl not only for her long locks of hair but also because her life is a miracle.

At the age of 15-years-old her father Ashley was diagnosed with testicular cancer and told that he would never be able to have children; so when Natasha found out she was pregnant, the happy couple were so surprised.

Make sure to share this story with your family and friends and brighten their day with an adorable baby!