We asked Morning Smile readers to share a story about their dad or an inspiring lesson their dad taught them. We got so many wonderful responses!

Thank you so much to everyone who wrote in, and a big thank you to all the amazing dads out there! Check out a few of our favorite responses below:

1. “I wonder what the poor people are doing.”

My father was a happy, kind man. On summer evenings, our family would sit on our comfortable, modest screened porch. While swinging on the porch swing he would often say “I wonder what the poor people are doing.”
I knew he was saying we were rich because we had each other and a beautiful summer evening.

My dad was an auto mechanic in the 50’s, 60’s, and 70’s. He was also a WWII vet. His whole life was an example of service to everyone. It’s hard to pick just one example, but here is one: We live in the northern plains of the US. The winters are bitter. Sunday mornings we always went to church. As we prepared to leave, one of us kids would be sent to the car to start it and get it warmed up. While we sat warmly in the car, we watched Dad go from parked car to parked car, getting them started because the cold had stopped the cars from starting. On those days, we were the last to drive away because my Dad made sure everyone got safely away. Thanks Dad! Love you and see you in heaven some day!

My dad only had a 9th grade education, but was so wise. He had two quotes that he used frequently. The one that I heard the most: “Make the best of it.” It’s the best advice that has stood the test of time, both his lifetime & thus far my lifetime. The second quote I have found to be equally true and valuable in putting every situation in perspective: “It could always be better, but it could always be worse.”

4. Better than a million bucks.

My daddy was my hero. As a young child I was unaware that he was addicted to drugs, I just knew that he was always there to hold me when I was sick and jump up and down in the front row of the audience when I won the Spelling Bee. My daddy passed away in 2012 but his immense love for me always gives me strength to get through another day.

One particular occasion of his selfless love I remember was when I was 13. Our Vacation Bible School group was going on a field trip. With four kids and only one working parent, it seemed impossible that my sister and I would be able to go. But the morning of the trip, my daddy woke us up and handed us ten dollars to share (this was in 1983 so that was like $100 to us!) He had heard us praying and talking about how much we really wanted to go. So he had gone out and painted someone’s fence to earn the money to give to us. Even now, many years later, that memory brings me to tears of joy.

5. Anything for his little girl…

60+ years ago, I wanted to go to the county fair… not to see the animals, but to try out the carnival rides. I wasn’t able to find any friend to go with me, so my dad agreed to take me. We rode everything that twisted, turned, and spun, and he truly gave me my heart’s desire. It was only later I learned my dad had motion sickness and somehow retained his stomach’s contents through 3 hours of turbulent rides. How I love that dear man!

My Dad was the best. He was kind, honest and a hard worker. In this day and age when swear words seem to be part of most conversations, I grew up thinking that the worst swear was “screwball.” This was the only word my Dad spoke when he was mad.

My father was often the first person to give assistance in a crisis in our neighborhood. I clearly remember two different instances when I was a young child where Dad leapt over a 3.5 ft fence to help a fallen neighbor. The first was next door to our house when a young neighbor man with a serious mobility problem fell backwards down a flight of porch stairs and hit his head on the cement walk. In an instant, Dad did a one-handed leap over the fence and made sure Frankie was breathing while Mom called for medical aid. The second time, a neighbor two houses away was painting his second floor porch while on a ladder. Suddenly he fell off the ladder and hit the pavement below. Dad cleared two fences in the blink of an eye to be sure help was called immediately for the man. In both instances the injured men recovered and I knew my dad was a hero!

This Father’s Day I will be missing the dear man, and I think of him every day. He was my friend and the best father you could ever want. He was shy, smart, and very funny. He taught me the practical lessons that all fathers should teach. One lesson he taught me when I was an awkward teenager was that I would be a wonderful “catch.” He told me that I am a smart, beautiful girl and that any man would treasure to have me in his life as a partner.

He taught me to respect myself. That stuck with me.

I am soon to be 65 years old, and even though the years march on, I know I will never forget my amazing dad. Richard L. Kile was 72years old when he passed away in 1991, but he packed a lot of living in those years. I only wish we’d had him longer.

Dad applied for the position of radioman with Admiral Byrd, for his journey to the South Pole and was accepted… until they found out how old Dad was, and he was too young to go. So, in 1936 Dad enlisted in the US Navy and the next 22 years he spent all over the globe making the world a safer place for everyone. In 1941, he survived the attack on Pearl Harbor, and went on from there, installing radar outposts in the Solomon Islands, Guam, and New Guinea. In 1957 he retired as a Lt. Commander after duty on the USS Massachusetts, the USS Avocet, and the USS Norton Sound, among others. 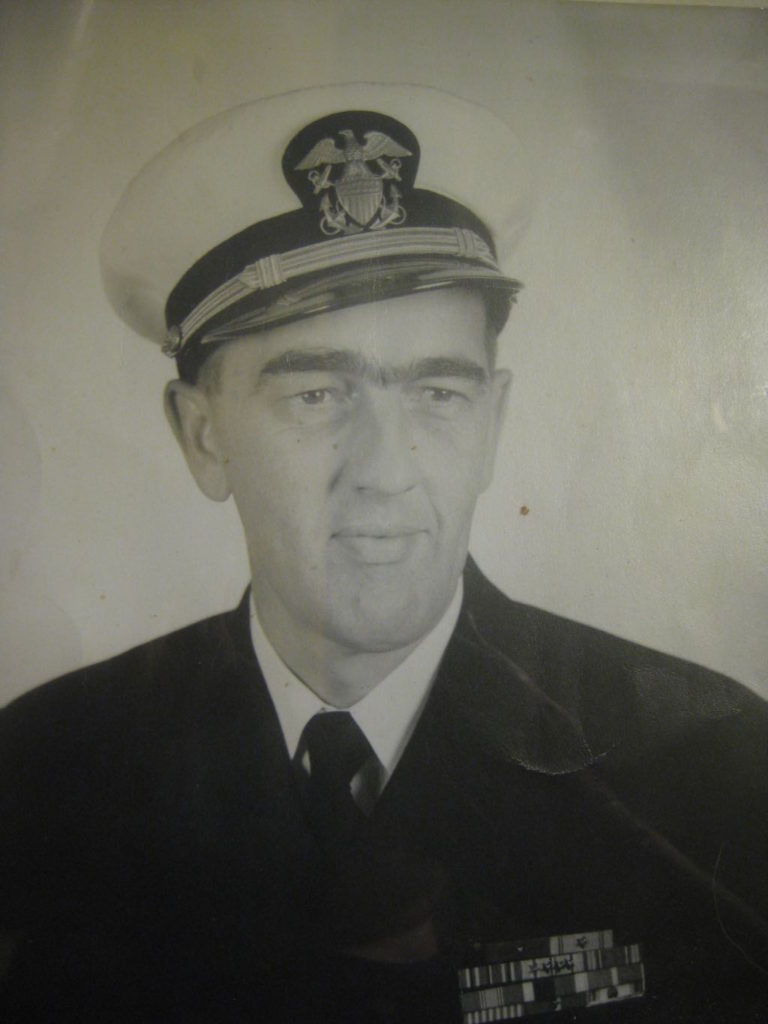 A photo of Dad shortly before he retired

My parents met on a blind date in Washington D.C. when my dad was stationed there for a short time and Mom worked for the USN in ordinance. Mom and he had 4 kids, and it was important to them to raise children that would be productive members of society. Dad in particular always wanted us to have the things he didn’t have and made sure we knew how to get them in honest, decent ways.  He was my hero and a lifelong example of good character and values. 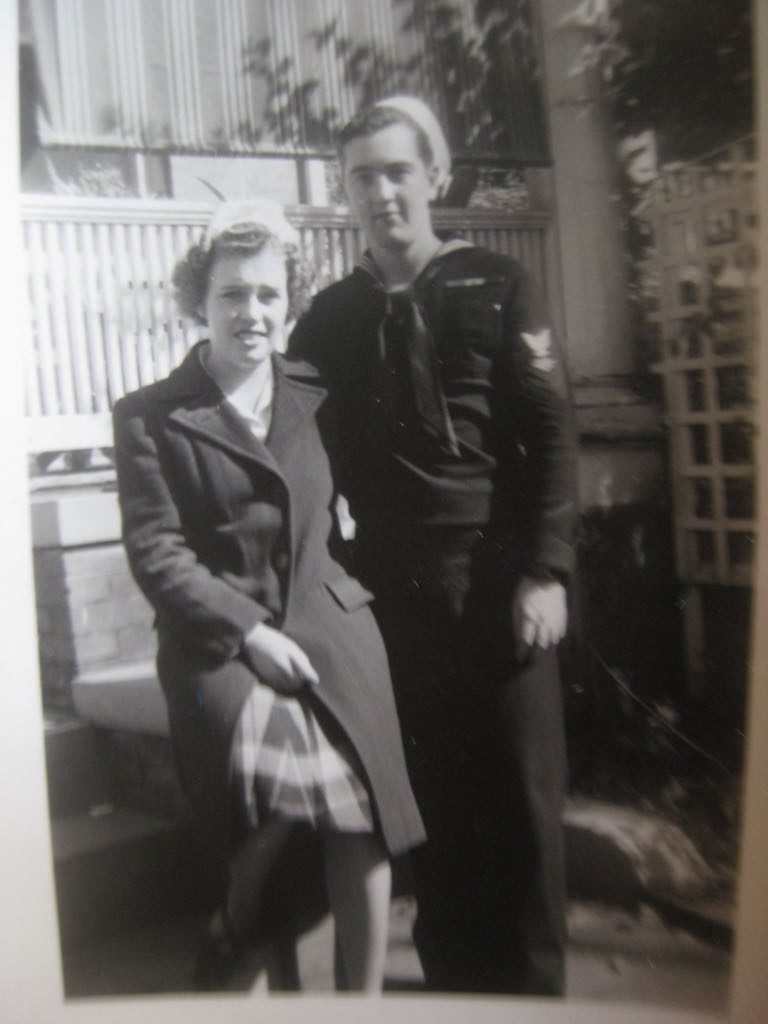 They were married for 44 years before Dad passed away, and Mom is still with us at age 96. I had the best Dad ever and will never forget my charmed childhood as his daughter. I love and miss him more than anyone will ever know.