Tackling behavioral problems at school is no easy feat, but Dr. Terrance Newton is doing just that with a surprisingly effective solution.

In his first year as principal of Warner Elementary School in Wilmington, Delaware, Terrance has already seen an incredible change in his at-risk students. All it took was a few quality conversations — and a pair of clippers. 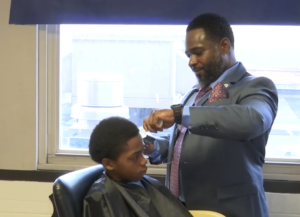 Terrance saw the problem as soon as he started at the inner-city school. Bullying was out of hand, and students were constantly being suspended. He believed the best way to solve this was to build positive relationships with students. So, he decided to get creative and set up an onsite barbershop.

Having cut hair before, Terrance figured the barbershop could be a safe space for students to open up. And he was right — not only has he bonded with former troublemakers, but suspensions have dropped from 103 to four in the last year! Even better, bullying has all but stopped.

“I take care of my babies,” Terrance told GMA. “It’s about building that relationship and that bond with them, and I utilize that barbershop to do that, to build connections.” 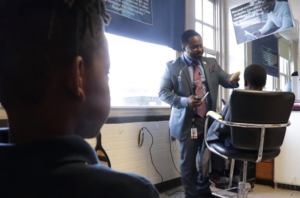 While Terrance cuts the boys’ hair himself, he brings in professionals to take care of the girls. But he’s become a mentor to all. Kamisha Collins has seen the difference herself in her 11-year-old son, Brandon Ponzo.

“In the beginning of the school year, my son started off really rough and was not getting along with Dr. Newton, but now that they have built this bond — he loves him to death,” Kamisha said. “Dr. Newton speaks positive things to them while he’s cutting their hair and it shows. His grades have gotten so much better.” 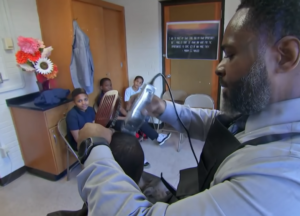 What a brilliant idea — not to mention a fantastic leader! A little love and care can make a big impact on struggling kids. It already has thanks to Terrance.

Learn more about Warner Elementary’s barbershop in the video below, and share to spread the idea to other schools!