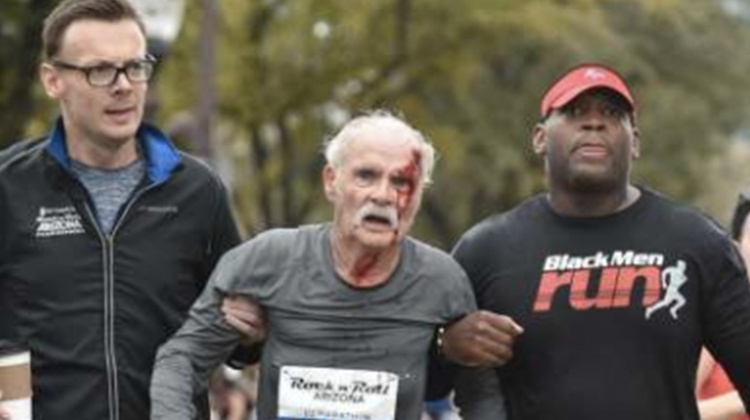 73-Yr-Old Veteran Slammed Into Pavement During Marathon, The...

John Wilkie, is a 73-year-old Veteran and marathoner from the great state of Arizona. Back in January, the elderly athlete was entering the final minutes of the Rock’n’Roll Marathon in Tempe, AZ when things got risky in a hurry. “The race started out like any other…” but after rounding the final corner a rouge three-wheeled baby carriage tripped Wilkie with its front wheel.

Wilkie went down hard. Dazed and a little confused, Wilke tried to stand… but it was at this moment that two strangers decided to, “fall out of the sky like angels,” and help him go the distance. Arms linked, a Starbucks toting spectator and an athlete in the race “half carried, half ran” with Wilke all the way to the finish line. But the random acts of kindness didn’t stop there.

As others realized that Wilke was hurt, people flocked to make sure he was ok and congratulate him on the big finish. One guy went to pick up his completion medal while another athlete went to grab water and a first aid kit, “It was incredible what they did for me,” he said.

Wilkie felt like the most blessed man in the world that day and it’s easy to see why. Check out the interview with Wilke and his story in the video below!