But something felt off to dispatcher Tim Teneyck of Oregon, Ohio, when a woman called to order a pizza on November 13. He told her she had the wrong number, only to quickly realize this had been no mistake on her part. 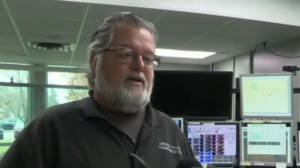 In a recording of the call, we can hear them both on the line. “You called 911 to order a pizza?” Tim asks. “This is the wrong number to call for a pizza.”

When the woman replied with her apartment information, everything became clear. She didn’t want a pizza at all; she needed help. But she couldn’t tell him that directly because she wasn’t in a safe place.

While Tim has never received a call like hers in his 14 years of service, he understood her message. After a few more questions, he says, “I’m getting you now.”

As it turned out, the woman was in an apartment with a man who was physically abusing her mother. She knew he would flee the scene if he discovered she was calling 911, so she pretended to order a pizza instead. When Tim sent officers her way, he had them turn off their sirens before they arrived.

The responding officers arrested 56-year-old Simon Lopez, who was charged with domestic violence and disorderly conduct while intoxicated.

Oregon Police Chief Michael Navarre said they couldn’t have rescued this woman without Tim’s help. He added that it’s important for people in danger to “somehow or another convey to that police dispatcher that you are in trouble, and this woman did that. She did that not with her words, but with the tone of her voice.”

As for Tim, he’s just grateful he listened carefully. “Other dispatchers … told me they wouldn’t have picked up on this,” he said.

Of course, the other hero is this clever woman who saved her mom by keeping a cool head. It couldn’t have been easy in such a stressful situation, which just makes her braver!

Learn more about this crucial call in the video below, and be sure to share the exchange. If you or someone you know is in danger, call the National Domestic Violence Hotline at 1−800−799−7233. Help is waiting!