Retirement is something most people look forward to, but saying goodbye to a dream career isn’t easy.

In 2017 Captain Ronald Smith, a United Airlines pilot, sat in the cockpit one last time to fly from Chicago to Brussels and finish off his beloved 32-year career. The day must have been bittersweet, but thanks to a group of young strangers, it also became a moment he will always treasure! 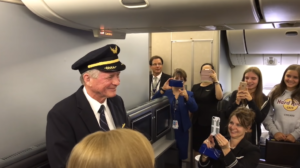 As it turns out, many of his passengers that day were members of a student choir from Luxembourg called LGE (Lycée des Garçons d’Esch-sur-Alzette). When they heard about Ronald’s retirement, they decided to give him a send-off to remember!

After landing at Brussels Airport, the group waited until all the other passengers exited the plane and Ronald came out of the pit — then they started singing! Nicolas Elsen, one of the students, recorded the sweet serenade, an a cappella rendition of Coldplay’s “Viva La Vida.” Their beautiful voices ring out around the cabin, making for a heavenly listening experience. 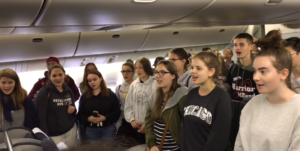 To Ronald, it was the perfect way to end a wonderful career. “That was beautiful. Wow,” he gushes as everyone claps. “Thank you so much! That was amazing.” 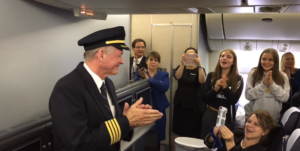 But it wasn’t just their voices that touched his heart — it was their song choice. Thousands watched the performance after Nicolas uploaded his video to YouTube, including Ronald’s daughter Lindsay.

She posted a response online thanking the choir for their “beautiful gift” and wrote, “You have no way of knowing this, but Coldplay is one of his favorite bands, so you couldn’t have chosen a better song.”

Everyone entering retirement should have a last day at work as special as this one. Congratulations, Ronald! We wish you all the best!

Listen to the choir’s angelic send-off in the video below, and be sure to share with your friends!