Every member of the St. Louis Blues has a special place in their heart for Laila Anderson.

Last year, the NHL hockey team was introduced to the sweet 11-year-old. She has a rare, life-threatening disease called hemophagocytic lymphohistiocytosis, and at the time, she needed a bone marrow transplant. The team got to work, setting up a Be the Match table at one of their games and successfully finding her find a donor. She had the transplant surgery in January. 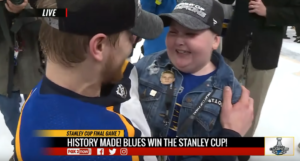 Now Laila is like family, and she’s never stopped supporting her team in their run for the Stanley Cup. When they won the seventh game of the Western Conference Final in Boston this summer, she was right there to celebrate their victory. Player Colton Parayko even gave Laila the honor of holding and kissing the Stanley Cup — twice!

“I never doubted these boys for one second,” she proudly told reporters. “I accomplished my battle, and they were my inspiration, so I knew they were going to finish as well.” 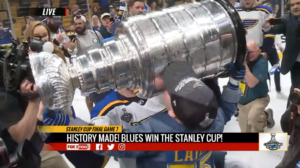 So when the players recently received their Stanley Cup championship rings, Parayko and his teammate Alexander Steen decided it was time to visit their favorite fan. 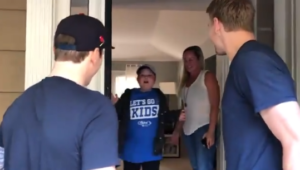 In a video, we hear them start to explain why they’re there. “So you know how much you mean to us, right? And what an inspiration you’ve been to so many people,” Steen asks Laila. “So me and Colton are here representing our organization and everybody there. And we have something we’d like you to open right now.”

He presents Laila with a gift box, and the moment she opens it, her jaw drops. 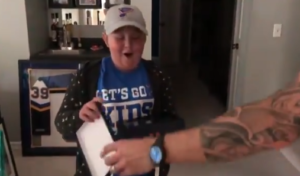 Nestled inside is her very own Stanley Cup ring. Overcome with shock and disbelief, Laila can’t help but cry. “I feel like I shouldn’t be touching this,” she says between giggles. 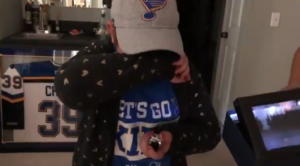 The team knows how untrue that is! The ring is a well-earned token of appreciation for someone who inspires them so much. And Laila will treasure it forever!

Even fans of their rivals, the Boston Bruins, are singing the Blues’ praises for this awesome act of kindness. One wrote, “This is one of the best things I have ever seen. Way to go, Blues and Laila.”

Another said, “Hey, Bruins fan here, losing to you guys was heartbreaking and it still hurts, but seeing the smile on this girl’s face and the joy you brought her always reminds me it’s just a game. She’s an inspiration. Congrats again.” 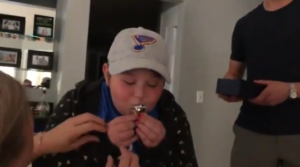 What a wonderful reminder that the most important parts of life are the people we love, not the games we win! We’re so proud of the Blues for going above and beyond to make this little girl’s day. Keep up the great work!

Watch as Laila opens her incredible gift in the video below, and share to spread her joy.

A special gift from her boys – thank you Laila for being such an inspiration during our #StanleyCup run. #stlblues pic.twitter.com/4Zlu1Xuwjb