Despite being diagnosed with acute myeloid leukemia, Sharon Thompson considers herself a lucky woman.

After all, she has one of the sweetest granddaughters in the world. That’s why she was so disappointed when she couldn’t be there for 16-year-old Taylor’s high school graduation. Earlier that year, the 70-year-old received a bone marrow transplant. She also underwent brain surgery at Houston Methodist Hospital shortly before the ceremony took place in Cody, Wyoming. She was in no shape to travel. 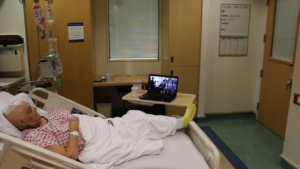 But Sharon’s night in her hospital bed turned out to be one of the joyful of her life thanks to a big surprise from the graduate herself.

Fortunately, Sharon was still able to watch a live feed of the event on a laptop. A reporter was there as well, seemingly to record her reaction to Taylor walking across the stage. Then came a very special announcement.

“The next graduate is not here this evening because she has a surprise for someone special in her life,” the announcer said. “Her grandmother has been battling cancer this past year and can’t be at graduation, so she is watching the ceremony live over the internet right now. Dressed in her cap and gown, our graduate is going to walk into her grandmother’s hospital room as I call her name.”

Finally, Taylor’s name was called as the door to Sharon’s room opened. There she was, wearing a huge grin! 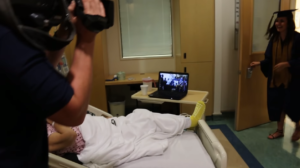 Tears slid down both of their cheeks as they gazed into each other’s eyes. Sharon touched her granddaughter’s face in disbelief. For a moment, she actually thought she was hallucinating. 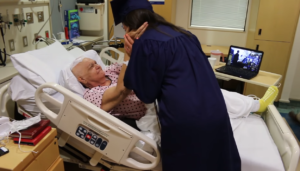 And even though she was feeling tired, weak, and sick, Sharon lit up the room. To Taylor, it was more than worth skipping her own graduation, especially when her grandma told her, “Everybody should have a granddaughter like you.”

“To me, graduation was much more special how I did it,” Taylor said. “It was the ultimate graduation for me.” 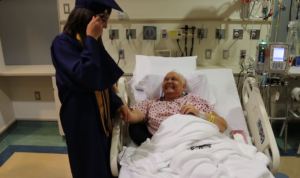 Perhaps the best part of this story is the update that came from Taylor’s brother, Carter, in 2019. He reassured YouTube viewers that his grandma is feeling much better now!

We’re so happy to hear Sharon’s health has taken a positive turn. She must have a lot to smile about these days, seeing as she was blessed with such a wonderful and thoughtful family!

Watch the emotional surprise play out in the video below, and share this beautiful moment with your own loved ones!