During a visit to Colorado earlier this month, Kansas resident Sam Orr decided to take a day and go adventuring with her mom, Jennifer, an off-roading enthusiast. The duo piled into a Jeep, called Sam’s faithful companion, Bentley, to jump in, and they headed off for Buena Vista’s dry scrubland canyons.

At some point during the outing, the Jeep careened off the side of the dusty dirt road, tumbling down a rolling mountainside and landing 540 feet below. 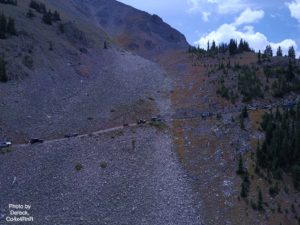 Tragically, Jennifer was killed in the accident, and Sam suffered severe injuries to her ribs and vertebra. Bentley, who was thrown from the Jeep, was last seen running from the accident site and into the wooded canyon beyond, doubtless suffering injuries of his own. 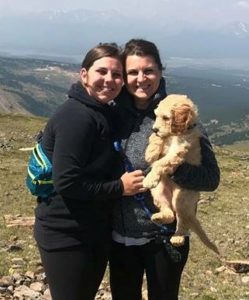 In the following weeks, crews and volunteers worked to recover the remains of the Jeep. Hopeful that Bentley survived, stranger and friends alike left out bowls of food and water and hung up missing dog posters.

Joseph Stratmann, a complete stranger who’d read about the search on Craigslist, drove across the state to help find Bentley. Miraculously, he was the first one to spot him! There he was, standing on the ridge above, patiently waiting for his family to return. 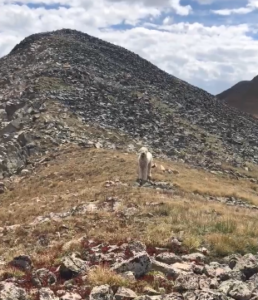 That was on a Thursday. Unfortunately, Sam had just arrived back to Kansas after her own fruitless search. By Saturday, though, the devoted dog mom was back onsite.

(Joseph) led me to the areas where he spotted Bentley, and we too were able to see him WAY up top on the mountain! From that moment, there was no turning back. Joe was my living guardian angel Saturday. He safely led me up the mountain, kept me calm and positive, everything I needed in that moment.

At times he was a human stepping stool for me when I had no foot placement while climbing the mountain on all fours. This incredible man is the reason I was able to engage with my traumatized Bentley. Had it not been for Joe, this puppy would not have returned home. 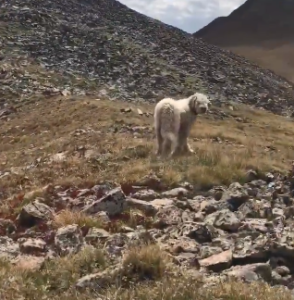 But after everything he’d been through, it took some time to gain Bentley’s trust. He was still traumatized and only let them get within a few dozen yards before turning and making his way back up the ridge. Sam carefully followed him, calling his name softly. Finally, he stopped and didn’t budge an inch for a whole 15 minutes, and Sam decided to back away for a while and let him come to her on his own time.

When I came back, him and I slowly altered walking few steps towards each other until finally I was able to convince him to come into my arms. And from then it was nothing but tears and celebration! 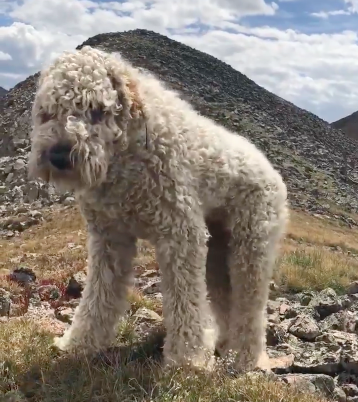 In a Facebook post, Sam wrote that the recovery team got a “much-needed infusion of energy” when they spotted Bentley and his family make their way through the recovery scene “and around the bend towards home.”

The video below is a real tear-jerker, so be sure to have your tissues ready. By this point in his journey, Bentley doesn’t know who he can trust, but Sam’s patient, soft encouragements as he inches closer work wonders. When he’s finally close enough to smell her hand, it’s clear he knows he’s home with Mom.

Share to spread thanks to everyone who helped Sam and her family cope with this tragedy, and ensure that Bentley finally made it back.

BENTLEY HAS BEEN RESCUED!This guy has been what can only be compared to a mountain goat for the past 19 days. After the fatal accident where I lost my mom, Bentley was last seen running down hill from the accident. For the past 3 days he has been spotted far far above the accident site, laying amongst the rocks along the ridge of the mountain. Peering down at the Jeep wreckage, patiently waiting for his family to return. This morning, I left Pueblo, CO at 4:45am and drove the accident site in Buena Vista, CO. Along with a team, we spent hours hiking to the top of said mountain. I have never, and I mean never, done such dangerous and rewarding activity in my entire life. We were able to spot Bentley early in the day, a few hours in, I came within 30-40 feet of him. He wouldn’t come to me, but seemed interested. Eventually his fear got the best of him and he made his way to the ridge (top). I slowly but surely followed him, upon reaching the summit, I could see him watching me. I got close to him, laid down, unpacked some items to eat and a new toy I’d purchased from him. He never moved an inch for over 15 minutes. Eventually I decided to give him some space, back off for a few minutes, and that got his attention. When I came back, him and I slowly altered walking few steps towards each other until finally I was able to convince him to come into my arms. And from then it was nothing but tears and celebration! Bentley is okay, he’s a little malnourished and dehydrated. But otherwise no noticeable injuries. Thank you to everyone who played a role in bringing this sweet boy home. I know the past 19 days, God and my beautiful momma have been keeping an eye on him. GOD IS SO GOOD! ❤️