When people walk by Ranveig Bjørklid Levinsen’s house in Gråsten, Denmark, they can’t help but smile and giggle.

That’s because the woman’s dogs, Bogart and Winston, can often be seen parked on the other side of the fence — sticking their heads out of hilariously painted cutouts. 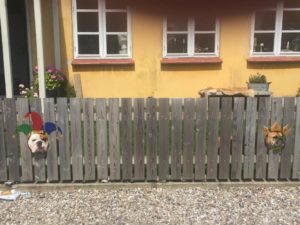 Ranveig and her husband, Claus, decided to cut out the holes in their fence a few years ago to stop the bulldogs from jumping over it.

“We are living close to a walking path, so many people pass by every day, and the dogs are just so curious,” Ranveig told Bored Panda. Bogart, especially, loves watching passersby.

“He has a [unique] personality, and he is so funny—I really do love that little guy,” Ranveig added. 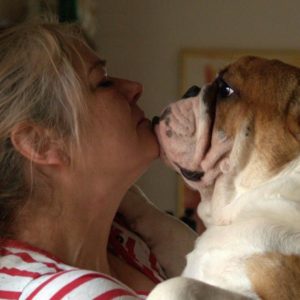 So, after cutting out the holes, Ranveig decided to have fun with it, asking her daughter to paint around the edges in the style of amusement park photo stand-ins. She went with a crown and jester hat, and clearly, the results are priceless! Bogart has even become an online star after a video of his adorable mug went viral, cracking up millions. Ranveig has since received a flood of messages from strangers who adore the paintings — and Bogart even more.

“I, myself, am blown away that my little dog has gone viral—just because he looks goofy,” she said. 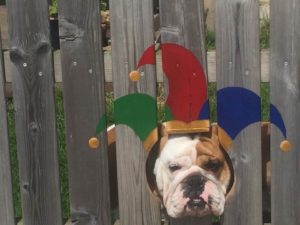 Of course, Winston looks just as cute as his brother, but he doesn’t seem concerned at all about sharing the limelight. 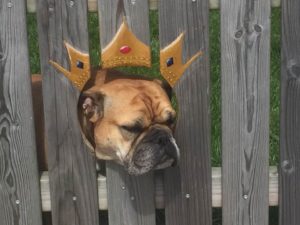 What an awesome way to not only keep dogs entertained, but spread smiles throughout the neighborhood! Even though it’s been a few years, Bogart and Winston’s cutouts are still just as funny. We certainly got a few laughs out of them!

Check out the short but hilarious clip that made “King Bogart” famous below. This idea is too good not to share, so spread the laughter to your friends and family today!