Few people can resist the charm of a baby animal. Sean Cadden of Philadelphia, Pennsylvania, will be the first to tell you that the same can be said for dogs!

Years ago, his family’s goat gave birth to an adorable kid named Zoomer. A few days later, Sean introduced Zoomer to Bud, his 4-month-old puppy, and Bud proceeded to lose his mind. 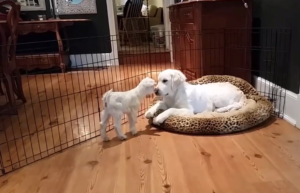 Sean captured the entire interaction on video, and it’s been making people laugh ever since!

In the clip, the two animals are a little cautious at first. As they sniff each other and touch noses, that changes pretty quickly for Bud!

In just a few moments, the adorable pup is bounding around the house, running to and from his new best friend in nothing but a blur. Zoomer, as it turns out, might have been a more accurate name for this canine ball of energy. 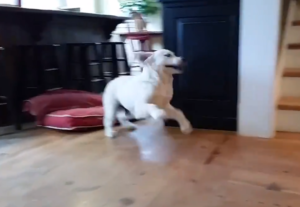 His tiny pal doesn’t seem to mind. For a 4-day-old, Zoomer stays remarkably calm as her brother zips around her. While she isn’t quite as enthusiastic as he is, she quickly begins to enjoy her new roommate’s antics. 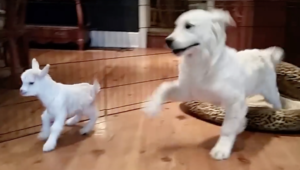 We can’t blame Bud for getting so excited. Honestly, we’d probably react the same way. It’s not every day you meet a baby goat — and your new best friend!

Watch the hilarious encounter in the video below, and share this story to give other animal lovers a laugh.

Just when Silvia Rayssa thought she'd seen everything there was to see when it came to animal cruelty, she met a Siberian husky named Maya whose condition made her sick...

10 Ways To Connect With Your Spouse Today

Get more stories like this in your inbox! Sign up for Smile, our free daily good news email read by over 825K people! Courtesy of Jehava Brown If you’re married...