Technology has made it even easier to get an up close look at Mother Nature.

For example, PBS’ “Nature” has released rare footage of a monarch butterfly swarm in Mexico, and the video is mesmerizing. They used a robotic drone camera that is disguised as a hummingbird to safely capture the moment, and we just can’t stop watching the spring miracle! 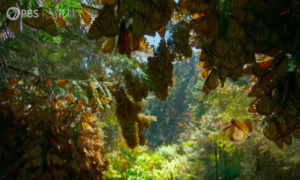 Since hummingbirds feed on the same nectar that monarchs eat, the butterflies did not perceive the drone as a threat. This allowed the camera to get closer than ever as these magnificent hibernating insects began to stir.

Monarchs are the only type of butterfly that migrate south for the cold winter months like birds do. Each year in the fall, millions of them fly up to 3,000 miles — from as far north as Canada — to the mountains of Mexico or Southern California.

Once they reach their destination, they enter a dormant phase where they feed on nectar and hibernate in oyamel fir trees. 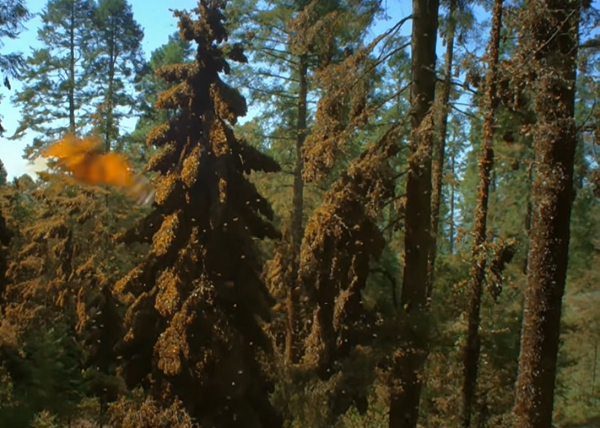 That means certain areas become absolutely covered in slumbering butterflies through the winter months. Each fir tree’s branches end up drooping with their weight.

Like clockwork, when the sun hits them in the spring, they begin to stir. All it takes is a few minutes before the air is filled with the beating of the brilliant orange and black wings of half a billion monarchs. It’s like something straight out of a fairy tale!

It’s especially awe-inspiring because so few humans have had the privilege of witnessing their transition before.

We’re so glad PBS’ hummingbird drone was there to capture every gorgeous second of this butterfly swarm. Nature never fails to impress and educate us!

Watch the monarch butterflies wake up from their long nap in the mesmerizing video below, and be sure to share this story with your friends.